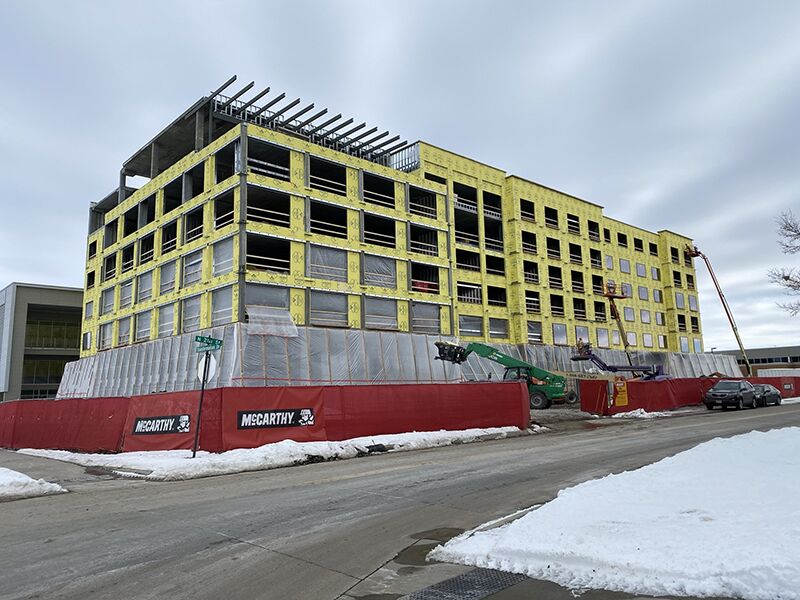 UNDER CONSTRUCTION: The Scarlet Hotel in Lincoln is under construction. Rooms will be named after and decorated with images from 151 communities in the state, including Wahoo, Mead, Yutan, Ceresco and Ashland. 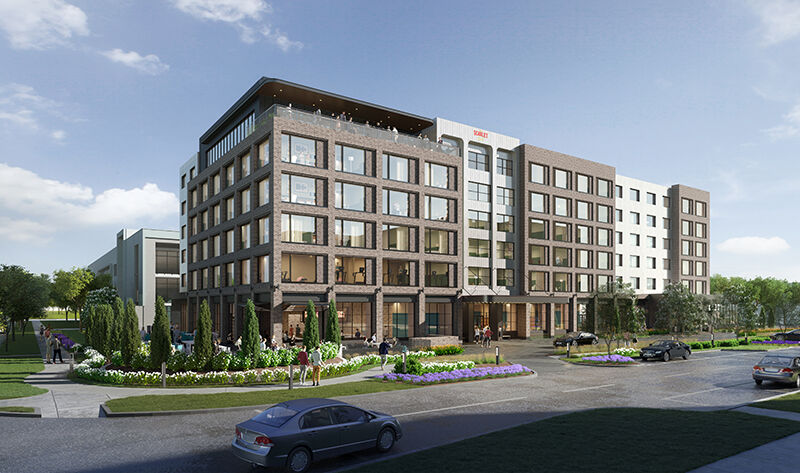 FINISHED LOOK: This computer rendering shows the hotel as it will look when construction is complete in August.

LINCOLN – As The Scarlet Hotel is under construction on the University of Nebraska-Lincoln’s Innovation Campus, Goldenrod Companies is working with communities throughout Nebraska to gather their history as a way to decorate the rooms.

Each small town community history will be illustrated through images and a short write up explaining the start of the town all the way to where the town is at now, Goldenrod Companies Senior Financial Analyst Will Suter said.

Several Saunders County communities like Wahoo, Ashland, Mead, Yutan and Ceresco are included in the 151 communities to be featured in the hotel. Suter said the hotel will have 154 rooms with 151 being named after Nebraskan communities. The remaining three rooms will be named after notable Nebraskans.

Suter expects the hotel to be completed by August 2021, just in time for football season. The hotel will also include amenities like a gym, coffee shop, rooftop lounge called The Red Owl and a restaurant called The Well and Good.

“What we’re trying to do is just give each guest the feeling of what that small town is like and give them a little history about where it is, how it started and where it’s at today,” Suter said.

Saunders County Historical Society Museum Curator Erin Hauser provided the information about Wahoo including the history, notable people and events and landmarks in the city. “The Wahoo, Nebraska Room” will have Hauser’s history which reviews Wahoo’s evolution over the years up to the present.

Ashland Historical Society Board Member Marilyn Wright sent over the history of Ashland for one room, and also included a biography of Bion Arnold, who has been nominated to be featured in one of the three suites as a notable Nebraskan.

Arnold graduated from both Ashland High School and University of Nebraska. He was a nationally recognized electrical engineer whose designs largely worked with electricity, railways and aeronautics. He is buried in the Ashland Cemetery.

“We are in hopes Ashland’s Bion Arnold will be one of the names selected to represent, historically, a famous Nebraskan in this hotel setting,” Wright said.

Suter, who is originally from Omaha, said it has been amazing to work with these communities like the towns in Saunders County, and that many are excited to be featured this way.

“It’s been a real history lesson for me,” Suter said. “It’s just really cool to hear about the way these towns came to be.”

MALMO – Amanda Benkusky has never felt so at home.

Jail sentence given for drug charge

WAHOO – An Omaha man was sentenced to 14 months in jail for an incident involving drugs that took place in Yutan.

FREMONT – Local Thrivent-affiliated offices transitioned to the Thrivent Advisor Network (TAN) and are now known as RetirePath Advisors, as of…

WAHOO – While she’s always had a passion for pediatrics, Dr. Nicole Akers likes family medicine because she enjoys being able to stick with pa…

CEDAR BLUFFS – A Sunday afternoon two-vehicle head-on collision resulted in a fatality and a serious injury.

UNDER CONSTRUCTION: The Scarlet Hotel in Lincoln is under construction. Rooms will be named after and decorated with images from 151 communities in the state, including Wahoo, Mead, Yutan, Ceresco and Ashland.

FINISHED LOOK: This computer rendering shows the hotel as it will look when construction is complete in August.