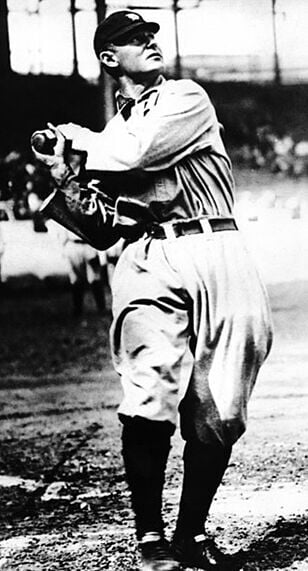 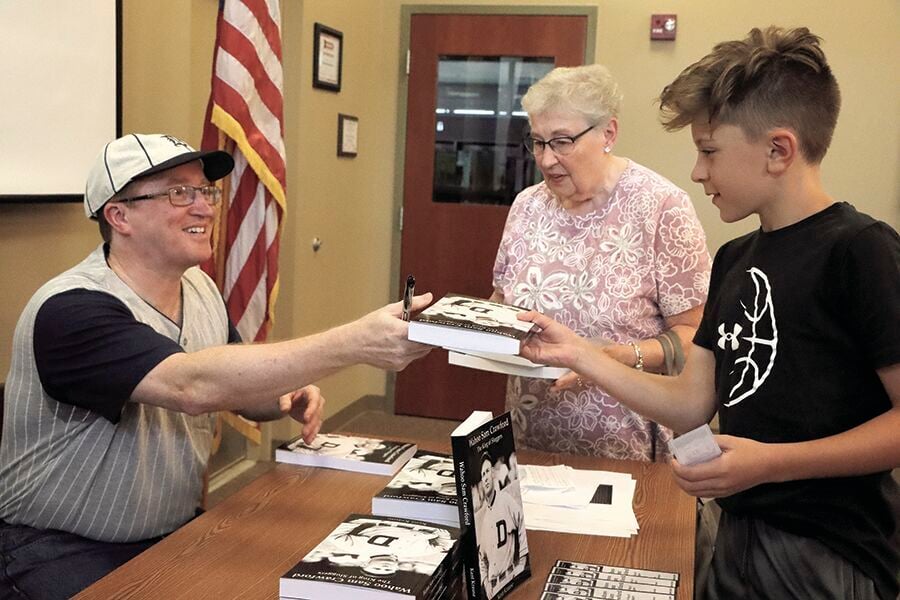 WAHOO – The combination of a scheduled talk for the Wahoo 150 celebration slated for last year, and the COVID-19 pandemic, worked out pretty well for author and baseball expert Kent Krause.

The Lincoln man was scheduled to give a talk last year about “Wahoo” Sam Crawford, the legendary major league baseball player and Wahoo native who is one of town’s “Five Famous Sons.” But the pandemic suspended the talk.

By the time the event was postponed, Krause had already done quite a bit of research on Crawford. But his interest in the power hitter had been piqued, and he put that research to good use by writing a book about the slugger.

“The talk got postponed and I wanted to keep it going,” he said Sunday during a presentation about his book, “Wahoo Sam Crawford, The King of the Sluggers,” at the Wahoo Public Library. The presentation was co-sponsored by the Wahoo Community Foundation and the Saunders County Historical Society. It is being hailed as a kickoff event for the Wahoo 150 celebration, which has most of its activities happening June 24 to 26 in Wahoo.

Crawford grew up in Wahoo on Orange Street, within spitting distance of the baseball field that now bears his name. As a teenager, he was actually known to be somewhat lazy, Krause said. But by 1896, his potential was also evident.

“He’s one of the best baseball players of these teenage boys in town,” Krause said.

Back then, many cities and villages had “town” teams, which were like semi-professional teams. A local businessman, Thomas Killian, who sponsored one of Wahoo’s teams was interested in Sam, but he was put off by the fact that Crawford reportedly smoked tobacco. So Killian offered Crawford a job as a shoe shine boy and a place on his baseball team if he quit smoking. Crawford took him up on the offer.

After a successful year on Killian’s team as a pitcher and outfielder, Crawford joined another Wahoo town team. The 17-year-old was lured by a plan by the team’s sponsor, Tom Snakes Crawford (no relation), to travel to other towns for games. They traveled to Fremont, Hooper, Scribner, Dodge and West Point by horse and wagon.

“That wagon was taking him on the path to Major League Baseball,” Krause said.

In West Point, Crawford was the only player to hit a home run. The West Point team manager offered Crawford $30 a month to play for his team. Crawford was excited to take the offer.

“Sam loves baseball. He’d play it for free. He was playing for free,” said Krause. “Now he’s going to get paid to play?”

Crawford was lured to play for Wymore, who sweetened the deal by offering him a job as a barber that paid $9 a week. At that time, Crawford was still planning to be a barber, not a professional baseball player.

When Crawford played for West Point he had a teammate who went to play in the Canadian minor league. While in Wymore, the former teammate came back to see his friend play at the end of the 1898 season. He told his manager Crawford should join him on his Canadian team.

In Canada, Crawford bats .370 and wins the league batting title. But attendance isn’t great, and the team disbands. Just a few days later, Grand Rapids, Mich. in the Western League snaps him up, Krause said.

Crawford draws the attention of major league scouts while in Grand Rapids. The Cincinnati Reds sign him in 1899.

“He’s made it his, his dreams are being realized,” Krause said.

In 1902, in the midst of what was then known as the Great Baseball War, Crawford signed with the Detroit Tigers. After months of controversy, the Reds’ manager let Crawford out of his contract in 1903.

Crawford batted cleanup for Detroit. He was joined by up-and-comer Ty Cobb and the Tigers end up in the World Series in 1907 against the Chicago Cubs.

Crawford was the first person from Nebraska to play in the World Series. Wahoo businesses closed their doors so everyone could follow the game. There was no radio or television in 1907, so updates were posted on a scoreboard in downtown. Wahoo fans were just as enthusiastic as their counterparts in Chicago or Detroit, according to Krause.

Detroit lost to the dominant Cubs, who were fueled by a pitching staff dubbed the “Murderer’s Row” and the famed “Tinker-to-Evers-to-Chance” infield.

The Tigers return to the World Series the next two years, but the title eluded them.

“For a big strong power hitter, he had some wheels,” Krause said.

Crawford earned several records over his career, some that may never be broken, including 309 career triples, Krause said.

“I don’t believe that any of us in this room are ever going to see the day where Sam Crawford is not the all time triples leader,” Krause told the crowd.

Crawford stayed in good shape throughout his career by staying away from alcohol and tobacco and regularly exercising.

“He was a pioneer in conditioning,” Krause said.

After injuries slowed him down in 1917, Crawford was let go by the Tigers. He wasn’t done playing baseball, though. He and his family moved to Hollywood and he signed with the Los Angeles Angels in the Pacific Coast League He hit over .300 in his four years with the Angels.

“Sam builds on the foundation for this program that eventually became very successful later on in the 1900s,” the author said.

He also served as an umpire for the Pacific Coast League, officiating for rising stars Joe DiMaggio and Ted Williams.

By his 60s, Crawford was kind of forgotten in the baseball world. But his old teammate Ty Cobb felt “Wahoo Sam” needed to be in the Hall of Fame, and he started a successful letter writing campaign that led to Crawford’s induction in Cooperstown in 1957.

“It’s a wonderful time for him. It’s just such an exciting revival for him, he’s back in the public view,” Krause said.

Wahoo held a big celebration for Crawford. They renamed the ballpark after him, and held banquets in his honor. Crawford toured his old home and the barbershop where he once shined shoes. Scores of children ask him for his autograph.

“You just get the sense that Sam Crawford, at the age of 77, had one of the best years of his life,” said Krause.

Crawford died in California in 1968, the same day the USC Trojans won the College World Series. That year, the Tigers won the World Series as well.

“Sam Crawford lived out his boyhood dream. He embodied the American success story on the diamond, though certain individual and team accomplishments eluded him, he reached levels of success that few have exceeded. ‘I had a fine career,’ Sam said in his later years, ‘I enjoyed every minute of it,’” Krause said.

The keeper of the flag: Rezac continues tradition of honor on 9/11

CERESCO – Mark Rezac usually finds himself at the St. Mary and St. Patrick Cemetery at around 5:30 a.m. on the verge of a mile-a-minute kind of day.

GREENWOOD – A single vehicle rollover accident near the Greenwood Exit took the life of a Bennington man last week.

LINCOLN – The Nebraska Department of Agriculture (NDA) is pleased to announce the winners of this year’s Poultry Photo contest. The annual con…

WAHOO – Between Broadway and Linden on Saturday, Sept. 18, Fifth Street is going to be a bustling vendor market with community members of all …

WAVERLY – After 20-plus years of hosting an annual golf tournament, School District 145 Foundation for Education has added an additional event…