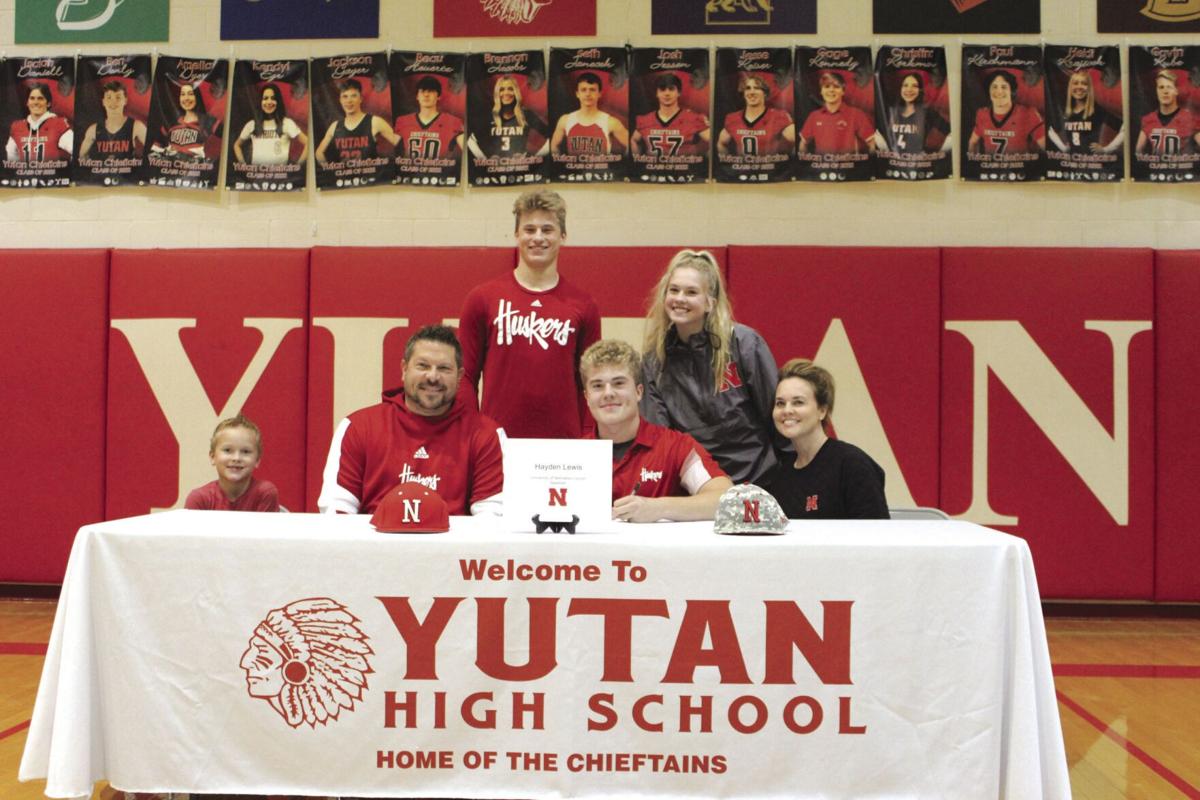 Hayden Lewis of Yutan signs his letter of intent to play baseball at Nebraska next season  at Yutan High School on Nov. 10. Pictured are (front row, from left) Lewis’ brother Jaxon, dad Peyton, Hayden and his mom Amy; (back row) brother Tyson and sister Jade. 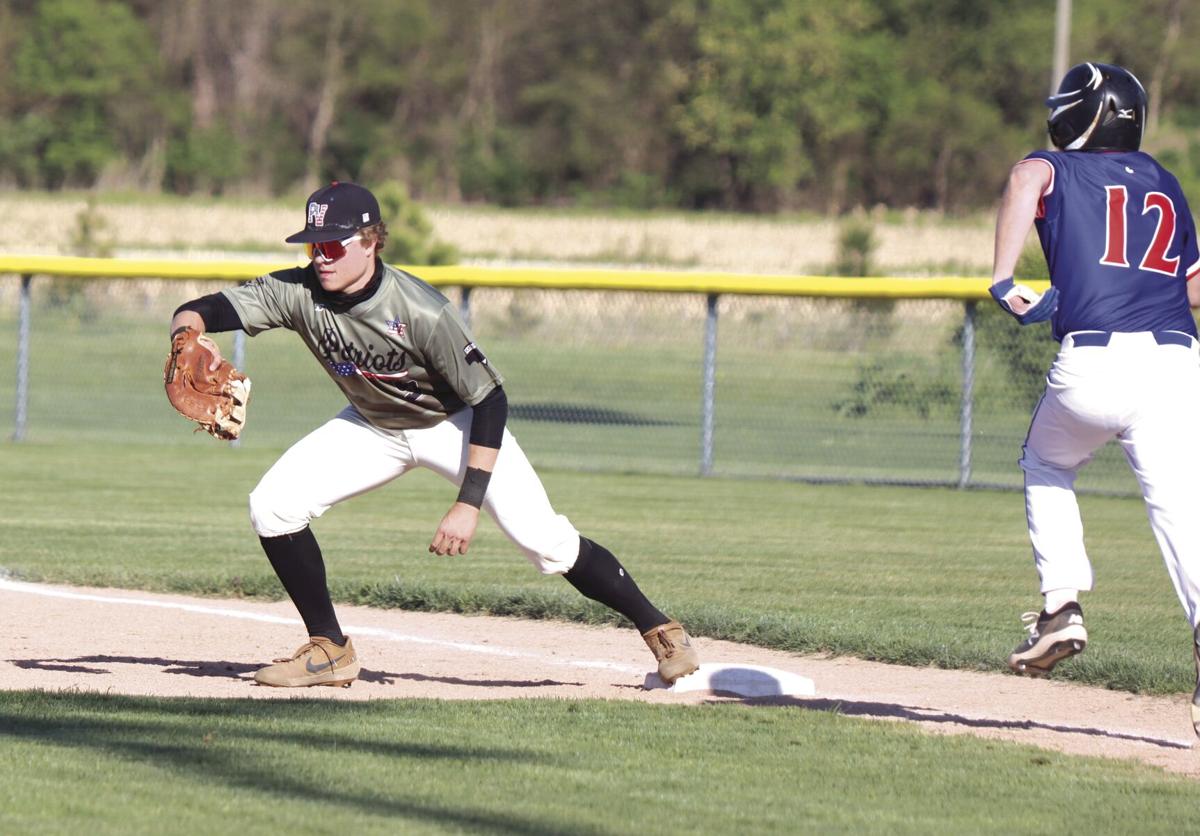 Yutan- November 10 at Yutan High School was a day that Hayden Lewis had been preparing for since he committed to play baseball at Nebraska-Lincoln almost two years prior. The senior for the Platte Valley Patriots finally made it official that he will be a Husker baseball player be signing on the dotted line.

“I have been committing there for about two years now and now that it’s official it feels pretty awesome and feels more real,” Lewis said. “Since I was young it’s been my dream to play there and it’s awesome to be able to represent my home state.”

Lewis has been nothing short of unstoppable since joining the Platte Valley Patriots as a freshman. In a sport where it may take a few years to physically mature, Lewis was having no problems picking up hits against kids three sometimes four years his age.

Besides high school baseball, Lewis has participated in his fair share of travel baseball. This summer he traveled to Georgia and played with the East Cobb Astros. His success continued there, where he was named to the Perfect Game Southeast Classic All-Tournament Team.

“I went down to Georgia this summer and that definitely helped,” Lewis said. “I was able to play with some really talented kids and kids who probably get drafted in the first round of the draft this year. Being able to pick their brains and learn from them and face some really high-level arms, gave me the perspective I needed to see what it’s going to be like in college.”

Hayden attributes a lot of his success and getting to where he is at, to his dad Peyton. He also played college baseball at Creighton and was drafted by the Toronto Blue Jays in the 18th round back in 1999.

He has helped him and his brother Tyson, who is also a standout baseball player, by giving them a training regimen that will help them improve.

“My dad has really helped me and my brother out, by giving us a plan we need to follow to help us achieve our dreams,” Lewis said. “He’s always been there, whenever we have wanted to go take batting practice or hit, whether that is at 5 a.m. or 11 p.m., he’s never said no to us. He’s always been available and willing to work with us.”

With one year left with the Patriots, Lewis is locked into the present and not worried about what the future holds for him. His goal is to try and get Platte Valley to the state tournament for the first time since 2015.

“I don’t really think about the signing, I just got out there and play the game with my teammates and have fun,” Lewis said. “I try to compete hard, every inning, every at-bat, and every play. Hopefully, we can get the Platte Valley Patriots to state and that’s what our team’s main goal is right now.”

Brawl breaks out between Cowboys, 49ers fans outside AT&T Stadium

Brawl breaks out between Cowboys, 49ers fans outside AT&T Stadium

Antetokounmpo and Milwaukee visit Young and the Hawks

With the opening ceremonies for the 2022 Beijing Olympics coming Feb. 4, here's a look back at 13 of the greatest ski moments in Olympic history.

SANTA CLARA, Calif. (AP) — Aaron Rodgers memorably vowed after his 2005 draft day snub that the San Francisco 49ers would be more disappointed for passing him up at No. 1 than he would be at sliding to No. 24.

Mikaela Shiffrin glances over her right shoulder at the photo of her late father, Jeff, hanging on a wall in her Edwards, Colorado, home. She smiles. Then she bows her head, sighs and begins speaking, occasionally pausing between words, perhaps because it simply still just doesn’t seem real, nearly two years after the unfathomable loss.

James, Lakers set for matchup with the Nuggets

TAMPA, Fla. (AP) — Tampa Bay Buccaneers coach Bruce Arians says he'll appeal a $50,000 fine imposed by the NFL for slapping the helmet of one of his players during last Sunday's 31-15 NFC wild-card playoff victory over the Philadelphia Eagles.

CINCINNATI (AP) — Joe Burrow led an efficient offense that scored on six drives, including two of his touchdown passes, and rookie Evan McPherson made four field goals as the Cincinnati Bengals finally advanced in the playoffs with a 26-19 win over Las Vegas in Saturday’s wild-card game.

ASPEN, Colo. (AP) — On a private halfpipe in Switzerland, Scotty James schemed for the future.

Eagles say Jalen Hurts will be their starting QB in 2022

PHILADELPHIA (AP) — The Philadelphia Eagles say Jalen Hurts will be the team’s starting quarterback in 2022.

Hayden Lewis of Yutan signs his letter of intent to play baseball at Nebraska next season  at Yutan High School on Nov. 10. Pictured are (front row, from left) Lewis’ brother Jaxon, dad Peyton, Hayden and his mom Amy; (back row) brother Tyson and sister Jade.