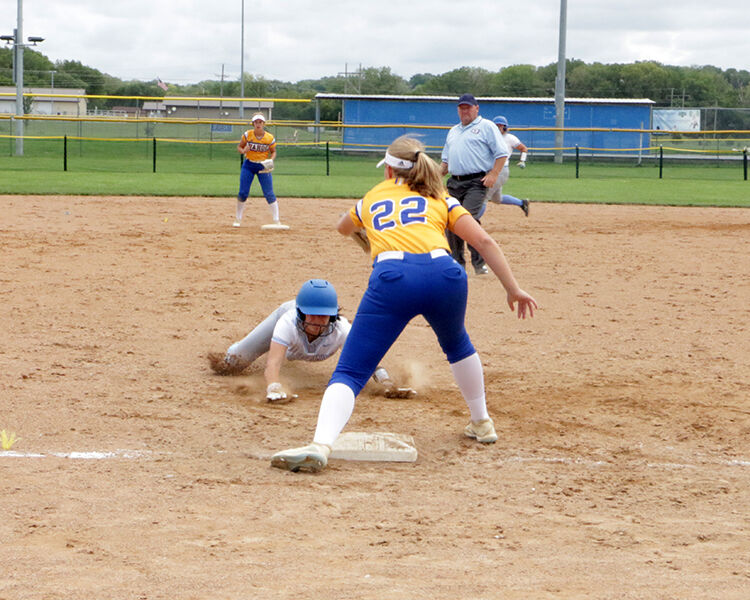 SAFE: Ava Miller slides into third base as the Bluejays played Wahoo during Saturday’s quad. (Staff Photos by Anna Boggs) 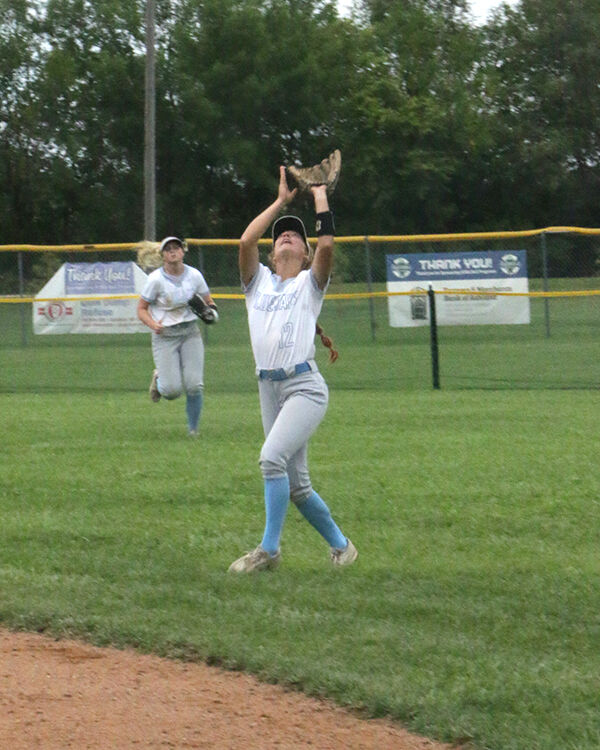 IN THE GLOVE: Ashland-Greenwood second baseman Danielle Tonjes makes a catch against Waverly during the quadrangular on Saturday at Jack Anderson Ballpark in Ashland. (Staff Photos by Anna Boggs)

ASHLAND – Class B No. 7 Wahoo reigned victorious over the weekend in the Ashland-Greenland softball quadrangular on Sept. 4 at Jack Anderson Ball Park in Ashland.

Against Crete, it was a pitcher’s duel between Autumn Iversen and Steuer for the Cardinals. Crete was never able to figure Iverson out as she threw a no hitter with six strikeouts and gave up one walk.

The only run came in the fifth when Harper Hancock reached base on a single to centerfield and later on moved up to third. A wild pitch got by the catcher and Hancock ended up scoring.

Next up the Warriors took on the host team Ashland-Greenwood. It was a scoreless game between the teams heading into the third inning of play.

It was during this inning Wahoo was finally able to get some runs across against the Bluejays starting pitcher Tatum Gossin.

Becca Wotipka started the inning off with a single and then Abbey Borchers got to first on an error. An error at first scored Wotipka and then a double to center by Sidney Smart drove in another run.

An error and a single by Jaiden Swanson to left field made it 4-0 in favor of Wahoo when the half inning was said and done.

With the two runners on in the fifth, the game was broken wide open with a two run homer by Katelyn Urban for the Warriors. After Iversen got home on a wild pitch, Urban got ahold of a ball that she sent over the wall in right field to make it 7-0.

A triple by Iversen and a walk in the sixth resulted in two more runs for Wahoo.

The Bluejays came back in their final at-bat of the game with a single by Kaelyn Fisher, a double by Piper Boggs, and a single by Hannah Keith to start the inning. Devin Rodgerson and Alexa Meyer-Bundy singled scoring four runs and a fielder’s choice scored A-G’s final run.

Urban led the Warriors with two runs driven in during the contest. Iversen, Smart, and Swanson all had one RBI. On the mound, Swanson pitched six innings with seven strikeouts.

For the Bluejays both Meyer-Bundy and Rodgerson had two RBI’s and Paige Comstock had one. Gossin pitched four innings with three strikeouts and in relief, Kealie Riecken went two innings with two strikeouts.

Wahoo’s final game of the day was against Waverly. Similar to the Warriors game vs A-G, they were able to build a big lead only to let their opponent come back at the end.

In the third inning, Abbey Borchers was able to produce a leadoff single. After Iversen was walked, Smart singled to center scoring two and then a sacrifice fly by Urban drove in one more.

Wahoo kept the Vikings quiet in the bottom half of the third and were able to tack on three more runs to their advantage in the fourth.

Rylee Koehler reached on an error at short to start the inning and then Iversen was walked. Back-to-back singles by Smart and Urban drove in two runs and put the Warrior in front 7-0.

Waverly answered back in a big way in the fifth with a two run home run. It started with Peyton Krumland singling and then Raynah McCall homered to center.

A sacrifice fly by Tenley Kozal brought Alexis Shepherd home to start the sixth. An error by the Warriors produced the final run of the contest.

Finishing with four RBI’s in the victory for Wahoo was Smart. Iverson pitched six innings and had six strikeouts.

McCall had two RBI’s for the Vikings in the win and Kozal had one. Pitching three innings and finishing with two strikeouts was Kaylei Denison and Megan Brinkman went two innings and had one strikeout.

The matchup between A-G and Waverly was one of the best games of the day. The Bluejays led up until in the fifth inning but ended up losing 8-7.

A-G’s offense got going early in the contest when Danielle Tonjes singled to center. Two more singles by Joslyn Sargent and Abby Fisher put the Bluejays up 1-0.

After a walk of Kaelyn Fisher, Boggs put the ball in play driving her home and increasing the advantage to two for A-G.

A leadoff walk of Rodgerson for the Vikings in the second came back to haunt them as she would, later on, tag up and score at third on a hit by Meyer-Bundy. Tonjes single during the next at-bat drove in another run and put the Bluejays up 4-0.

Waverly got one run back in the third when Shepherd singled on a hard ground ball. Katlyn Kappler was ready to go at third and got home easily.

Trailing 7-3 in the fifth, Kozal was able to single for the Vikings with two runners on scoring two. At this point, the Bluejays were rattled and three walks with the bases loaded secured the win for Waverly.

Kozal had two RBI’s for the Vikings in the game and Tataum Peery and Shepherd both drove in one. Going five innings on the mound was Denison with three strikeouts.

A-G was led by Tonjes and Sargent who both had two RBI’s. Hannah Keith pitched four innings for the Bluejays and had three strikeouts.

Both Waverly and A-G beat Crete during the tournament. The Bluejays defeated the Cardinals 5-4 and Waverly won by a final of 8-4.

Against Crete, Kozal had a team 2 RBI’s on two hits in the game. Brinkman pitched 3.2 innings and picked up two strikeouts.

SAFE: Ava Miller slides into third base as the Bluejays played Wahoo during Saturday’s quad. (Staff Photos by Anna Boggs)

IN THE GLOVE: Ashland-Greenwood second baseman Danielle Tonjes makes a catch against Waverly during the quadrangular on Saturday at Jack Anderson Ballpark in Ashland. (Staff Photos by Anna Boggs)