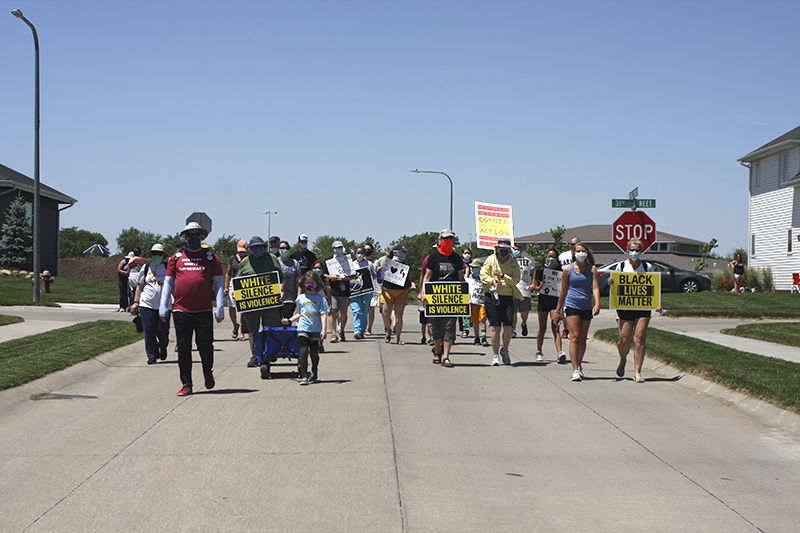 MARCHING ON: A group of about 40 protestors peacefully march through the Sabre Heights neighborhood in Ashland on their way to a rally downtown on Saturday afternoon in support of the Black Lives Matter movement. (Staff Photo by Anna Boggs) 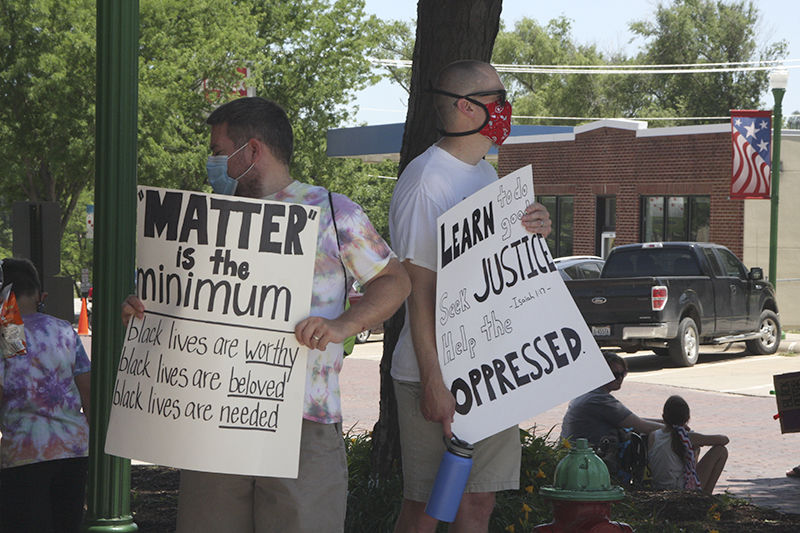 SIGNS OF CHANGE: Two protestors stand back to back with their signs during the Black Lives Matter protest march and rally on Saturday afternoon in Ashland. (Staff Photo by Anna Boggs)

ASHLAND – Over 40 peaceful protestors marched through the streets of Ashland in support of the Black Lives Matter movement on Saturday afternoon.

Isaiah McVay organized the march with the help of Dene’ Oglesby after witnessing the protests taking across the country following the murder of George Floyd by a Minneapolis police officer.

“In this instance, I felt like the changes that have needed to happen haven’t happened and I wanted to be a part of that change,” said McVay.

The march began in the Sabre Heights neighborhood on the west edge of Ashland and ended downtown. McVay received permission from the City of Ashland to barricade one block of Silver Street, from 13th to 14th streets, to hold a rally.

The goal of the march was to show that Ashland is a welcoming place, to inform people how to register to vote and encourage the public to contact their local government representatives to speak about racism.

A peaceful protest was the plan, McVay said, and that was the result. Many drivers and passengers in passing vehicles honked and waved in support, he said.

But the marchers also encountered some opposition along the way.

There was one counter-protestor among the ranks, but he did not stand out.

“Honestly, most of us didn’t even know he was there,” McVay said.

There were also a few people who shouted negative statements as the march proceeded through Ashland. And when they arrived at the rally point, a man yelled “All Lives Matter” as he got into his convertible. A couple confronted a protestor, but police were nearby and it was easily broken up.

“Nobody was aggressive,” McVay said.

Most of the negativity was greeted with positivity from the marchers.

“We just waived at people and smiled,” said McVay.

During the rally McVay discussed actionable things the public can do to support the Black Lives Matter movement.

“It was more about a call to action and to try and keep the momentum going,” he said.

McVay communicated with the local police prior to the march to make sure the event stayed peaceful. He said he would like to continue the conversation with the Ashland Police Department to discuss policies. Although Ashland is a small community, it would be a good thing to have specific policies in place regarding race, he added.

“Ashland is a growing town, a bedroom community,” he said. “There’s no reason not to have policies in place now before we have the potential for it to be a problem.”

Oglesby’s speech focused on registering to vote and the importance of voting, especially in local elections. She also touched on ways to communicate with local elected officials to let them know what you want them to do, McVay recalled.

The organizers then asked marchers to speak. One speech in particular was very powerful, McVay said.

Dayna Wilson, an Ashland teenager who is Chinese, said being a person of color in Ashland has been hard.

“I grew up with very few people that look like me, including my parents; they are white,” Wilson said.

The only other Chinese person in Ashland is Annie, her younger sister. Both were adopted by Dan and Alaina Wilson.

“I stand with Black Lives Matter because all lives cannot matter until the one that is being targeted does matter,” Wilson said to applause from the crowd.

“I think that needs to be heard,” she said.

The number of people who turned out for the protest exceeded McVay’s expectations, although he wasn’t sure how many would show up when he started organizing the event a week prior.

“I was willing to march by myself,” he said.

Now McVay is looking to arrange another protest march in the near future.

“I think it’s really important for smaller communities to get involved with these things,” he said.

It is not responsible to think that everything is fine when it comes to racism in small towns, McVay said.

WAHOO – Despite the fact that the risk dial last week dropped back into the moderate range, Saunders County is seeing a troubling spike in COV…

Editor’s Note – Last week, the Gazette profiled the seven new teachers at Ashland-Greenwood Elementary School. This week, the focus is on the …

ASHLAND – The Strategic Air Command and Aerospace Museum near Ashland unveiled the new permanent exhibit, “High Pressure: The Korean War and A…

MARCHING ON: A group of about 40 protestors peacefully march through the Sabre Heights neighborhood in Ashland on their way to a rally downtown on Saturday afternoon in support of the Black Lives Matter movement. (Staff Photo by Anna Boggs)

SIGNS OF CHANGE: Two protestors stand back to back with their signs during the Black Lives Matter protest march and rally on Saturday afternoon in Ashland. (Staff Photo by Anna Boggs)