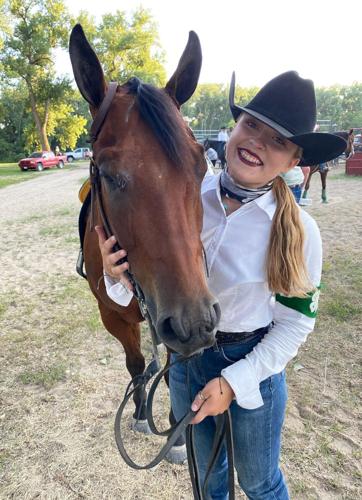 AWARDS: Madelyn Thomas hugs one of her horses after a competition. The Cedar Bluffs teen has won numerous awards over the years. 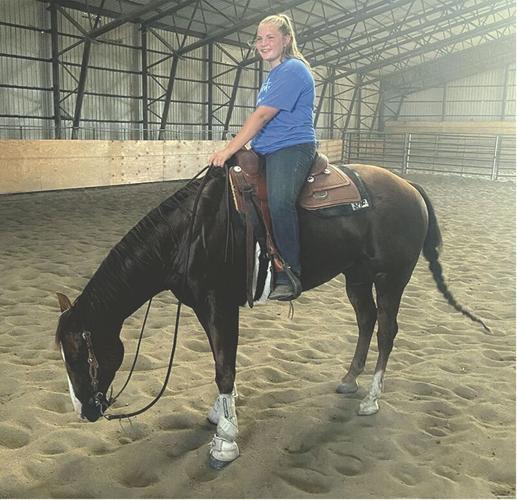 CEDAR BLUFFS – Gracie Thomas has a tender bond with a horse named Bubba.

The 14-year-old lives in rural Cedar Bluffs with her parents, Kristyn and Bill, and older sister, Madelyn.

Gracie’s family has a circle driveway near their horse pens.

“Every morning, Gracie has to unroll the window – it doesn’t matter if it’s 100 degrees or if it’s negative 20 – and she has to yell: ‘Bye Bubba,’” Kristyn said.

Bubba comes out of the barn, looks at Gracie and whinnies. Kristyn said Gracie has the biggest connection with a horse she’s ever seen. It’s a bond that puts them in sync when they ride.

Gracie and Madelyn, 17, have been in sync with different horses throughout years of 4-H and open class competitions. In the process, they’ve learned teamwork, patience and responsibility.

They’ve earned several awards. Moreover, they’ve enjoyed the connection with animals who’ve taught them so much.

Both were very young when first placed on a horse.

“I was 2 years old and mom put me on the back of a horse and I’ve never looked back since,” Madelyn said.

Madelyn was 8 when she began competing in events with a horse named, Josie. The horse already knew how to maneuver through different show ring patterns.

Madelyn and Josie were a team. In the process, Madelyn said she learned communication and teamwork skills, which she believes helps in life.

“If you’re on a team in a job, you have to work with everyone,” she said.

Madelyn would learn about loss from Josie, when the 12-year-old horse was in a tragic accident the day after Christmas one year.

Josie and other horses had been put out to pasture when she didn’t see a fence.

“She went head over heels and broke her front leg,” said Madelyn, who along with Gracie, saw the accident.

The horse’s death was a tough blow.

“It was really hard,” Madelyn said. “I didn’t ride for a couple months. I didn’t have a horse.”

Tia looked tall in a Facebook photo, but she was small. Even so, the family bought her and then-10-year-old Madelyn began training with Tia.

“She was the sweetest, little horse you’ll ever meet,” Madelyn said. “Her temperament was so docile and calm. You never find that in a 2-year-old– and she wasn’t scared of anything.”

Madelyn and Tia won the 3- to 5-year-old halter mares class at the state 4-H horse show.

Madelyn would find another teammate in a gelding named Koty. She rode Koty in western classes in 4-H, open class and American Quarter Horse shows.

They began English riding in June.

It was a good fit.

“He moves so much better in English than he did in western,” Madelyn said. “Nothing was clicking when we were riding western.”

The team won the Hunter Under Saddle class, which had many talented riders and horses, at the District 4-H Horse Show this year.

In July, Madelyn made finals and Top 10 in the State 4-H Horse Exposition in Hunter Under Saddle and was reserve champion in English Equitation (riding in a specific pattern).

She was champion in the 3-5-year-old halter gelding class, too.

Through her experiences, Madelyn said she’s learned to be patient.

“They’re not going to learn it overnight,” Madelyn said of working with horses. “You have to help them learn what you’re teaching them.”

Madelyn looks forward to riding her horse after school.

Like her sister, Gracie’s love of horses began early.

Gracie was 3 months old when Kristyn put her on a horse with a cousin and took a photo.

The girl recalls coming home from preschool and being excited about the prospect of getting to ride a horse.

By the time she was 5, Gracie was participating in walk-trot horsemanship (riding) in open shows around the state.

At 7, she started participating in western pleasure classes in open show competitions.

“He wasn’t a very fast horse,” Gracie said. “You have to go slow before you go fast.”

She didn’t stay with barrel racing and pole bending, but taught a gelding named, Lemon, how to perform different maneuvers, while she walked and led him on a halter in showmanship competition.

At 10, Gracie took part in her first State 4-H horse show with Lemon.

Amid lots of competition, Gracie either placed in the Top 10 or Top 5 in the classes in which she participated. As years progressed, she took part in reining events, including spins and sliding stops on a horse.

“You want to take what you have learned from a horse and what they taught you and give somebody else the opportunity to love and learn and do well with that horse,” Kristyn said.

The horse was at a show at Albion in June, when he heard Gracie call his name. His head shot up and he looked for her.

Gracie’s warm bond with Bubba includes teaching him how to participate in showmanship, halter, pleasure and horsemanship events.

In July, Gracie won the 6- to 10-year-old geldings halter class and ranch pleasure at the State 4-H Horse Show.

Kristyn said her daughters have worked hard training their horses.

“They know it’s a responsibility and it’s given my kids a lot of character,” she said. “It’s taught them how to be humble, because a 1,000-pound animal will humble you real fast.”

“You can think you’re doing awesome and the horse is doing awesome and you can go into a class and it can turn out to be one of the worst classes you’ll have all summer,” she said. “They (the horses) have a mind of their own.”

And yet, they form a strong bond with the people who love them.

AWARDS: Madelyn Thomas hugs one of her horses after a competition. The Cedar Bluffs teen has won numerous awards over the years.