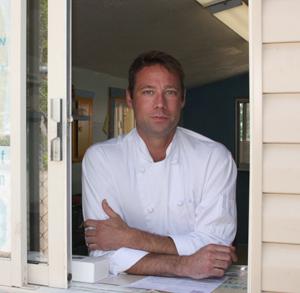 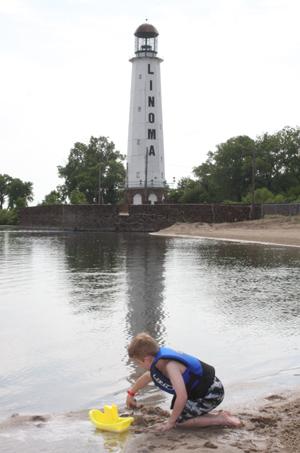 SUMMER FUN: Caleb Christensen of Bellevue plays in the sand at Linoma Beach on opening day. Chef and South Bend native Brook Dill reopened the beach this summer, along with a bar he calls Linoma Beach Bar. Caleb and his mother, Paula Christensen, were one of the first visitors to the beach. “It’s nice to have a place like this to come and relax,” she said. (Staff Photo by Suzi Nelson)

ASHLAND – Where can a Nebraska-born chef whose heart belongs in the Caribbean find his happy place? At Linoma Beach!

South Bend native Brook Dill has returned to his roots. With young daughter Olivia in tow, he moved back to the area to be near family, he said. He is in the process of buying a house in Ashland. And he has reopened a favorite summer hotspot in the area – the Linoma Beach.

Dave Lutton, a co-owner of the Linoma Beach resort, said the owners are excited to have Dill on board. When they bought the property last year, they did not plan to reopen the beach for daily use but just for special events.

But Dill came in with a fresh new concept where his culinary skills and his experience on the Caribbean beaches can be combined.

Dill grew up on the family farm in South Bend. His father was an aerospace engineer, and the family moved frequently. He attended high school in Murdock for a time, but left the area at the age of 15.

Being a chef was a job Dill knew was his destiny.

His first experience in the kitchen was baking bread with his mother. As a youngster, he won a grand championship ribbon at the state fair for his chocolate cake recipe.

By age 14, Dill was working in the kitchen at the former NebraSKI resort in Sarpy County. After high school, he trained at the Culinary Institute of America in New York City.

For the next 15 years, Dill traveled around the world, honing his craft in storied kitchens like Lutece in New York City and Sassafraz in Toronto. He also trained in Switzerland and later taught classes at the Culinary Institute of America at Greystone in St. Helena, Calif.

Through those years, Dill was never one to stay long in the same place. Frequent stops included the island of St. John in the Caribbean, where he took his craft to the island’s sandy beaches.

Dill found the slow way of life on a Caribbean island was more to his liking than the fast pace of New York City. And he was drawn to the excitement and atmosphere of the Caribbean bar scene.

“I know what a beach bar is, I’ve been to some of the best in the world,” he said.

He hopes to bring some of that atmosphere to Linoma Beach Bar. Despite his extensive culinary background, Dill is keeping the menu simple, relying on an outdoor grill as his primary cooking utensil. The menu includes cheeseburgers, bratwurst and chicken sandwiches, but with a twist. Dill dresses his burger with Tillamook cheddar. Fire-roasted baby sweet peppers and grilled garlic shoots adorn the bratwurst. Feta cheese, baby butter lettuce and mint grown organically in his own garden top the chicken sandwich.

Appetizers and small plates also have Dill’s flair. He will serve grilled corn on the cob with toppings that change weekly. Some early offerings included smoked sea salt, lime, fresh parsley and Parmesan cheese. Summer rolls with poached shrimp, scallions and cilantro served with a peanut dipping sauce were also on the menu.

Dill said the menu will change frequently, maybe even daily, depending on what is available. For example, last week he served a Cuban-style pork loin on a bed of wild rice.

“We’re attempting to use local produce,” he said.

That includes lettuce grown from a little garden Dill and his daughter, Olivia, are tending at their Ashland home.

The kitchen is open 11 a.m. to 5 p.m. Tuesday through Sunday and Dill has already expanded to deliver to the local area.

The beach will be open seven days a week, Dill said. So far, the summer hasn’t exactly been beach weather, but hot weather this week will hopefully bring in the customers. As of last week, there had been only one hot day, but it was an “overwhelming success,” Dill said.

Beachgoers will find plenty of clean, soft sand to play in, as well as lots of swimming in the lake, which is “at your own risk,” meaning there is no lifeguard. A net is up for sand volleyball or badminton, and colorful chairs and umbrellas dot the beach for a cool spot to relax.

Dill knows there is a lot of history at Linoma Beach. He has heard the stories of the resort’s popularity decades ago, and how hundreds of Ashland kids learned to swim there. While he was deciding to open the beach and bar, he interviewed people on the streets of Ashland to gauge interest.

“Everyone was positive,” he said.

Dill has lots of plans for the beach and bar, including special events throughout the summer. His first attempt, a sand sculpture contest, was rained out, but he is not giving up, he said. Plans include movie nights and a fall concert series. Long term plans include opening a small indoor bar and a private tiki bar. He’d also like to offer special gourmet events, as well as cooking classes.

Dill’s career has taken him across the globe. But once his daughter was born three years ago, the single dad realized how important it is to have family close by.

“As I got older, I realized there was nothing wrong with coming home,” he said.

That’s why Dill came home, moving to Ashland after taking over Irma’s Bistro at Creighton University in Omaha.

After getting the bistro up and going, Dill learned that Linoma Beach’s owners were looking for someone to run the beach and bar. In just a few short weeks, he had his business plan ready and opened on June 18. He now splits his time between the bistro and the beach.

Dill said he is happy to be back home, but that he will always long to have his feet in the sand. Linoma Beach is his way of bringing the flavor of his beloved Caribbean islands to his home.

“This satisfies my Caribbean soul,” he said.

For more information or to place takeout orders, call 340-998-5502 or go to www. linomabeachbar.com.

Suffering adds up for APD officer injured on duty

WAHOO – A traffic stop Monday night on Nebraska 92 resulted in what likely is the largest amount of marijuana ever confiscated in Saunders County.

ASHLAND – If you’re an Ashland resident with stuff piling up that you don’t know how to get rid of, your day is coming.

SUMMER FUN: Caleb Christensen of Bellevue plays in the sand at Linoma Beach on opening day. Chef and South Bend native Brook Dill reopened the beach this summer, along with a bar he calls Linoma Beach Bar. Caleb and his mother, Paula Christensen, were one of the first visitors to the beach. “It’s nice to have a place like this to come and relax,” she said. (Staff Photo by Suzi Nelson)