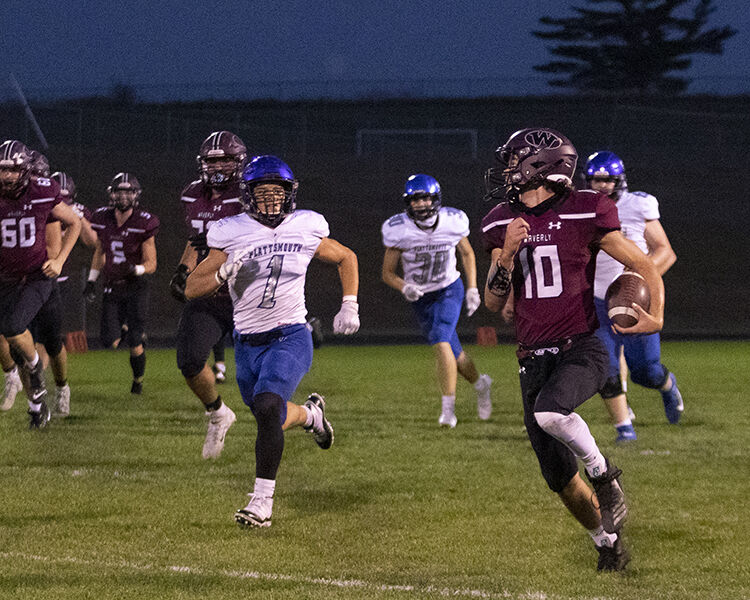 BREAKING FREE: Waverly’s quarterback Cole Murray (10) breaks free from the cluster to score the first touchdown of the game against Plattsmouth on Friday. (Staff Photo by Elsie Stormberg) 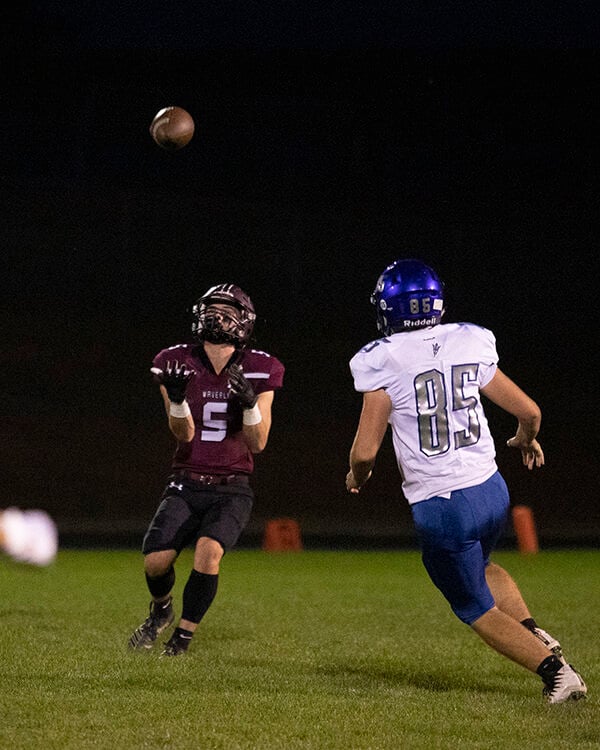 RED HANDED: Waverly’s Zane Schawang catches a punt from Plattsmouth during a game on Friday at Waverly. (Staff Photo by Elsie Stormberg)

WAVERLY – The Waverly Vikings and coach Reed Manstedt take pride in their defense.

The Class B No. 6 Vikings pitched their third shutout at home with a 36-0 dismantling of No. 7 Plattsmouth on Senior Night on Friday. Waverly has allowed just seven points all season on home turf.

“We’ve kind of hung our hat on our defense all year,” Manstedt said. “We knew that (Christian) Meneses kid was extremely talented. He was the Class B leading rusher coming into the game averaging almost 190 yards a game. To hear he had 31 carries for 10 yards, that was fun to be able to tell the boys that. All week long we talked about keeping him under 100 (yards).”

The Vikings offense did not drive inside the Plattsmouth red zone until there was 8 minutes left on the clock in the fourth quarter — it didn’t need to with a host of scoring plays from distance.

Sophomore quarterback Cole Murray took a quarterback keeper 78 yards on the Vikings’ second drive of the opening quarter. Zane Schawang added a 47-yard scamper on Waverly’s next offensive play to give the Vikings a 14-0 lead.

“We knew going into tonight this was going to be an extremely physical football game,” Manstedt said. “Both teams love to run the ball and both teams pride themselves on playing physical football. Fortunately for us we were able to create some big runs early. Credit our offensive line, they did a really great job tonight.”

Plattsmouth drove to the Vikings’ 5-yard line following a Schawang fumble. Then Schawang made up for it, recovering a Blue Devils fumble and racing 85 yards for the score.

The Vikings forced and recovered three Blue Devil fumbles, and added a safety in the final minute of the game. Plattsmouth punted seven times and had three turnovers on downs.

Evan Canoyer led Waverly with 98 yards rushing on nine carries that included a 66-yard rumble in the third quarter that put the Vikings ahead 20-0. Murray ran for 84 yards on six carries.

LINCOLN – Phil Brey was given his first guitar when he was 13 years old. When his brother gifted him the instrument in their Raymond home, he …

BREAKING FREE: Waverly’s quarterback Cole Murray (10) breaks free from the cluster to score the first touchdown of the game against Plattsmouth on Friday. (Staff Photo by Elsie Stormberg)

RED HANDED: Waverly’s Zane Schawang catches a punt from Plattsmouth during a game on Friday at Waverly. (Staff Photo by Elsie Stormberg)