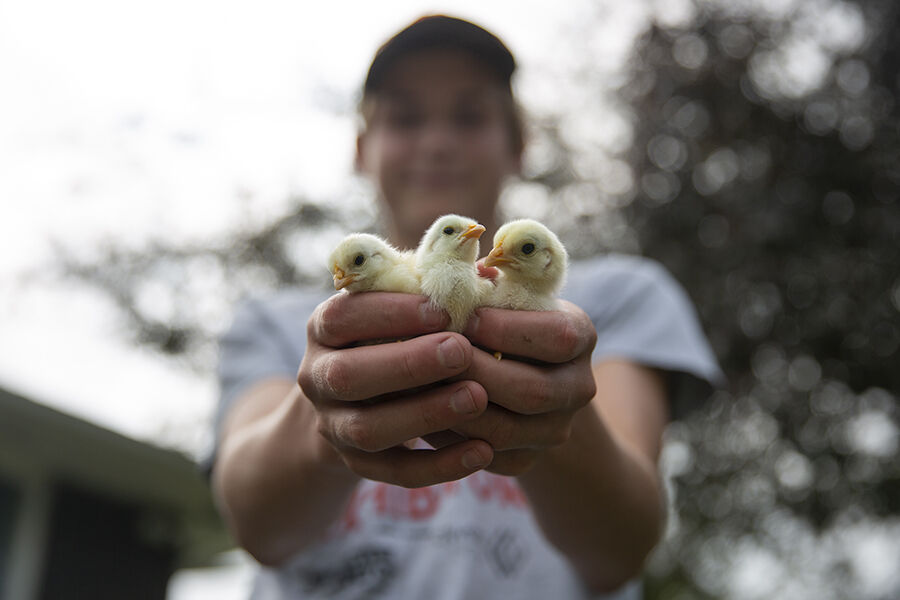 NEWLY HATCHED: Noah Jelinek holds three chicks at his home in Waverly on July 16. Jelinek has been breeding his own chickens for the last two years. (Staff Photo by Elsie Stormberg) 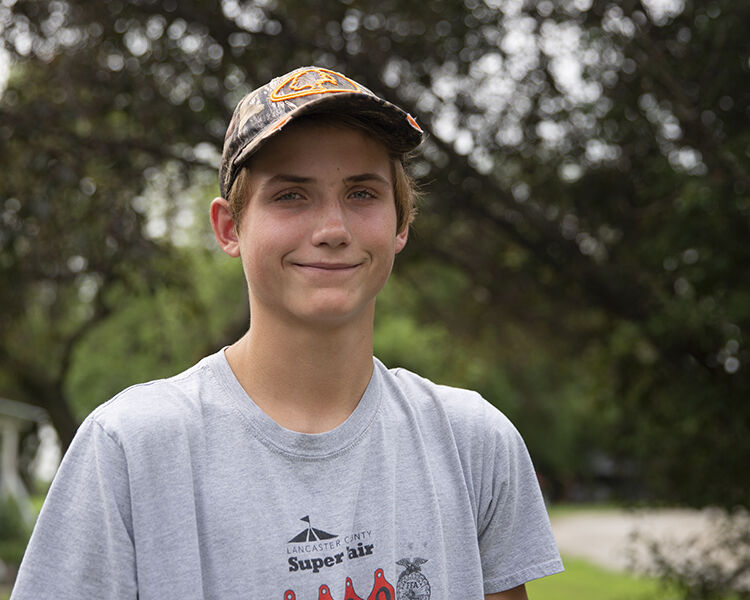 CHICKEN BREEDER: Noah Jelinek stands outside his home in Waverly on July 16. Jelinek will be competing at the Lancaster County Super Fair with chickens he has bred over the last two years himself. (Staff Photo by Elsie Stormberg)

By Elsie Stormberg The Waverly News

The Waverly High School sophomore started showing chickens about six years ago with $2 farm store chickens. Now, at the Lancaster County Super Fair from July 29 to Aug. 1, Jelinek will be showing chickens he’s bred himself worth a lot more than $2.

“Now we’re up to like $100 pairs,” his mother Nichole Jelinek said.

After his first fair showing chickens, Jelinek received the “Mini Encyclopedia of Chicken Breeds and Care” for his birthday. This was how he caught the chicken bug.

“I just kind of got started from there,” Jelinek said.

Jelinek, 15, plans to show modern games, wyandotte bantams and naked neck langshans at the fair this year. Over the last two years, Jelinek has gotten into breeding his own chickens.

Jelinek will set the chickens he wants to breed up in breeding pens and ensure they are the correct chickens. He’ll later take the eggs and place them in the incubator in his room. After they are hatched, Jelinek takes the chicks and places them in a large, plastic tub until they get bigger.

Ultimately, the chicks will end up in the coop with the other chickens Jelinek owns. Jelinek said his favorite part of the breeding process is candling.

This is when he can take a flashlight to the eggs in his incubator and check if the chick is developing. Jelinek said he gets to see the blood vessels, eyes and feet kicking through this process until the egg hatches.

For Jelinek, breeding is similar to a puzzle.

“Throughout the year, I’ll breed them with ones that I think will bring out good qualities in the chicks,” Jelinek said. “Like if there’s one with a bad tail, or you know, one with a good tail so basically kind of like a puzzle.”

Jelinek has also gotten the opportunity to meet a lot of nice people and make new friends. Two of those people he’s met have become influential mentors to Jelinek.

Both Ashley Foutch of Friend and Brett Kreifels of Springfield have become people Jelinek can ask questions of and receive guidance from.

“I’ve gotten birds from both of them but also over the years, when I have a sick chicken or something, they really helped me out with that,” Jelinek said.

Foutch said she’s known Jelinek for a little over a year now since he purchased chickens from her. In working together, Foutch said she and Jelinek have some of the same interests in “old school” chicken breeds and they are regularly discussing what chickens are best.

“I think it’s really promising,” Foutch said. “I mean, for a 15-year-old kid to stay interested in poultry.”

Also having sold Jelinek chickens, Kreifels has been working with Jelinek for the last few years. Kreifels said they routinely discuss how to select birds for show.

Throughout this experience, Kreifels, an extension educator, said he views Jelinek as a younger version of himself and that Jelinek could go into poultry or agriculture education.

“He has a passion for poultry, so he’s kind of running with that,” Kreifels said. “That will hopefully lead him to a career in poultry.”

that through the SAE project it is helpful to keep track of what he’s been doing with his breeding program.

Waverly FFA alumni and chapter members like Jelinek will also be volunteering at the Fun at the Farm zone each day at the fair. The kid’s zone will have eight to nine different areas teaching children about aspects of agriculture including the life cycle of corn and livestock identification.

Jelinek hopes that getting bitten by the chicken bug can help him gain experience to get a job in agriculture as a livestock feed nutritionist.

“This will help me get ready for that and just keep me around agriculture,” Jelinek said. “I’m hoping to keep this going and maybe be able to continue with it after college.”

Recycling contract ends due to costs

WAVERLY – Waverly will no longer have a recycling center after Sept. 30.

WAVERLY – After opening up the American Legion Juniors B2 District tournament by demolishing Crete 21-3 on July 9, the Empire Netting and Fenc…

NEWLY HATCHED: Noah Jelinek holds three chicks at his home in Waverly on July 16. Jelinek has been breeding his own chickens for the last two years. (Staff Photo by Elsie Stormberg)

CHICKEN BREEDER: Noah Jelinek stands outside his home in Waverly on July 16. Jelinek will be competing at the Lancaster County Super Fair with chickens he has bred over the last two years himself. (Staff Photo by Elsie Stormberg)