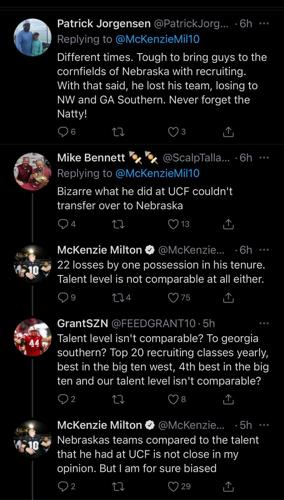 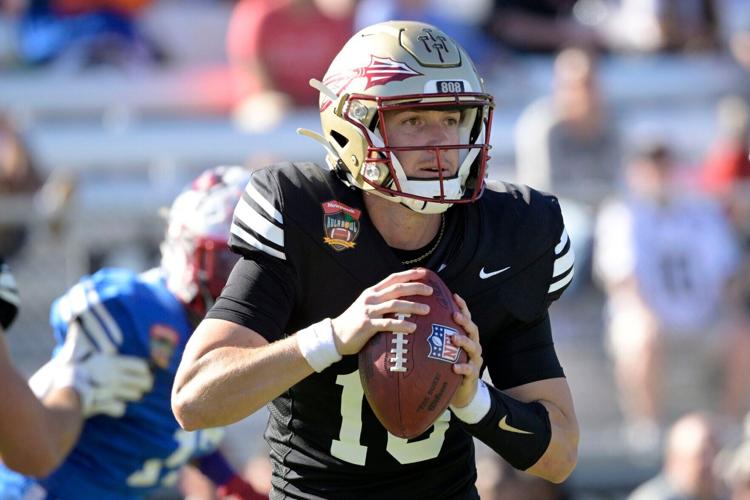 It didn't work out for Scott Frost at Nebraska, but his quarterback at his last stop doesn't believe the coach's reputation should be tarnished.

Instead, McKenzie Milton is shifting the attention to what he deems a talent gap between his 2017 undefeated UCF Knights and the Frost-era Huskers.

On the same day that Nebraska fired Frost after a 1-2 start to the season, Milton took to Twitter to offer his thoughts about Frost. The duo guided the upstart Knights to a 13-0 record and Peach Bowl championship in 2017.

Milton praised Frost for his offensive brilliance and the success he achieved at Oregon and UCF.

Wherever Scott Frost lands that University will be lucky to have him. Bummed it didn’t work out for him at Nebraska but let’s not be quick to forget what he did at Oregon & UCF. Best offensive mind & coach I had the pleasure to learn from 💯

Once the replies started rolling in, Milton went to bat for his former squad and Frost. A thread ensued about why Nebraska didn't measure up to UCF in Frost's coaching stint with his alma mater.

Milton cited Nebraska's jarring amount of one-possession losses while adding that his UCF squads had far superior talent than the Big Ten program.

Meanwhile, Frost floundered with a 16-31 mark at Nebraska, capped off with a 45-42 loss to Sun Belt program Georgia Southern.

Since Frost's arrival in 2018, eight Huskers were selected in the draft, including second-round picks Cam Jurgens and Cam Taylor-Britt.

UCF is currently in the AAC and will transition to the Big 12 in 2013. In 1997, Nebraska defeated visiting UCF 38-24 in the lone matchup between the programs.

Throughout his coaching career, Busch has faced a variety of offenses and a variety of challenges. His current task might be his toughest yet.

As defense falters, Casey Thompson's pick of Nebraska not yet panning out

Casey Thompson could've picked Indiana, Auburn - even returned to Texas. He chose Nebraska, where a faltering defense means his pick hasn't yet panned out

McKewon: How Nebraska football starts to clean up Frost-made mess

Mickey Joseph has to say Nebraska players will be OK, writes Sam McKewon, but nothing about the OU loss suggests two weeks solves much

McKewon: No guarantee Blackshirts get back even after Chinander firing

No. 5 Clemson out to continue dominance of No. 21 Wake Forest

No. 5 Clemson out to continue dominance of No. 21 Wake Forest

Overmatched Nebraska falters defensively in 49-14 loss to No. 6 Oklahoma

Despite an air of change, the on-field product was all too familiar for Nebraska. The Huskers surrendered 49 straight points and 580 yards of total offense in a lopsided loss.

Who can afford to buy the Phoenix Suns?