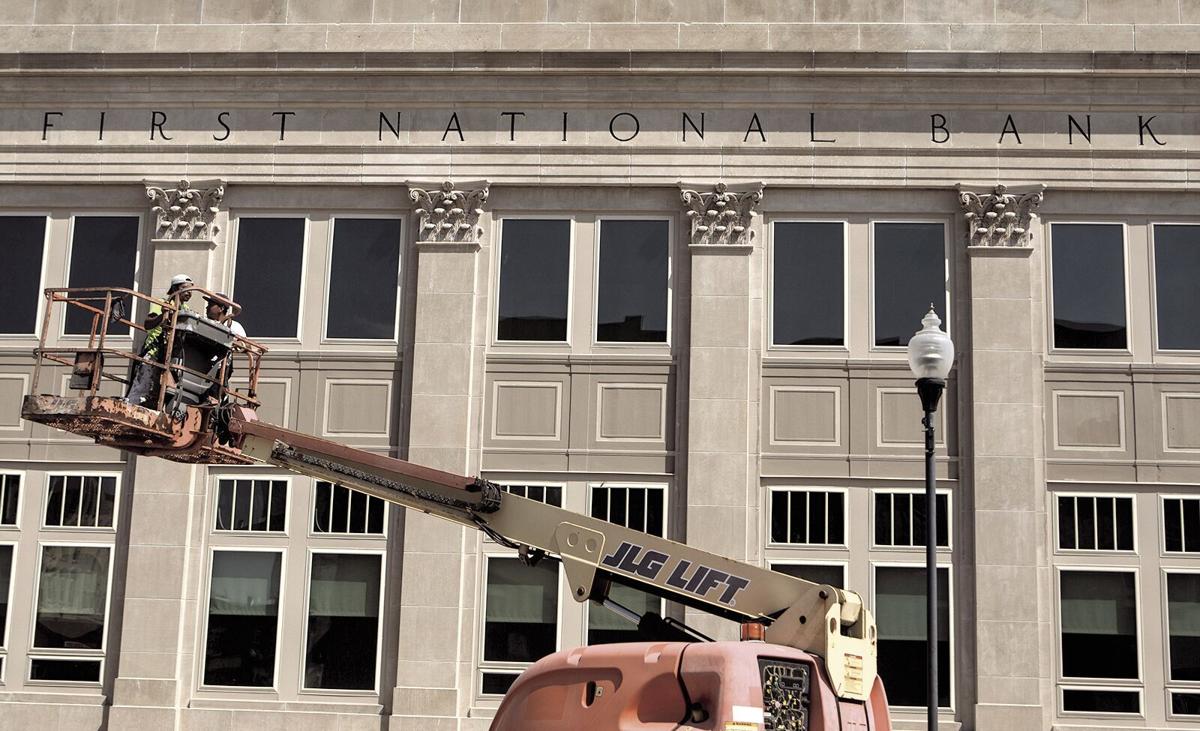 A NEW LOOK: Restorations to the FirstBank building in Wahoo are made on Friday. (Staff Photo by Elsie Stormberg) 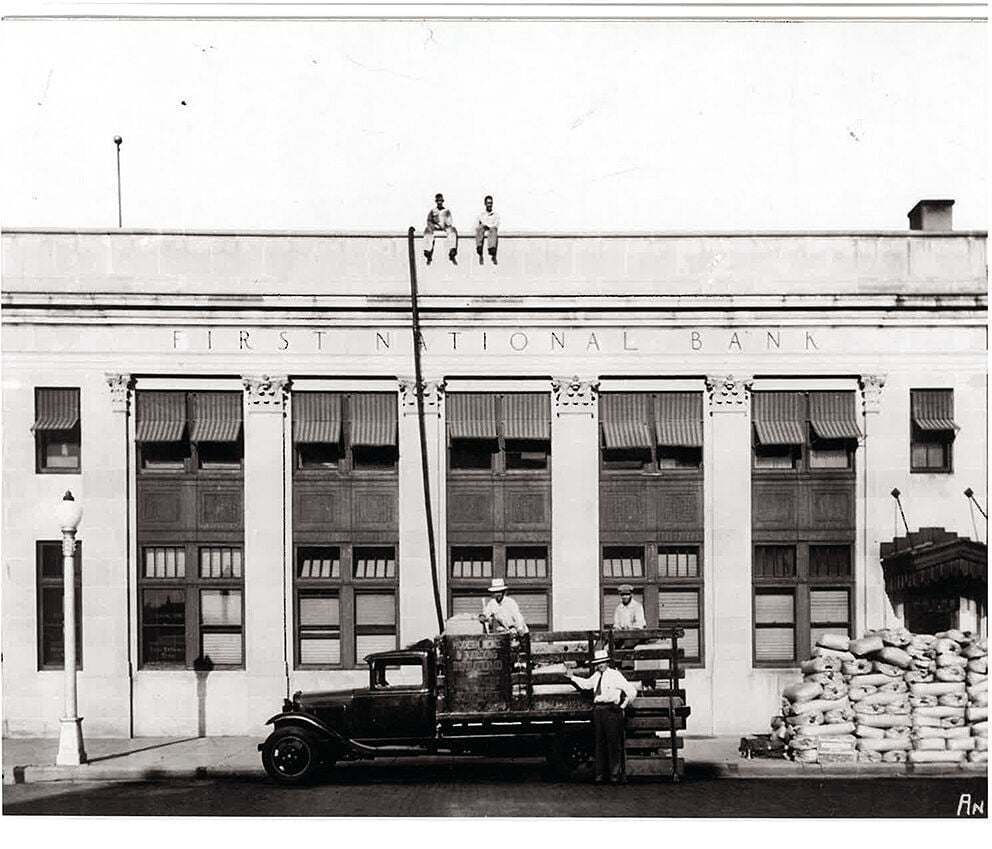 HISTORY: Workmen sit atop the First National Bank building in Wahoo several decades ago. They appear to be doing work to maintain the exterior, a project that is being done again on 101-year-old structure.

WAHOO – The character and detail of a 101-year-old downtown Wahoo building has been slowly revealed during a restoration project that lasted through the summer.

Work continued last week on the project to clean the exterior limestone of the FirstBank of Nebraska building at 201 East Fifth Street.

“We’re very proud of the building and just trying to keep it up to date,” said Stuart Krejci, that bank’s market president.

The building is the third bank under the charter of First National to stand on the corner of Fifth and Linden streets. When the bank was first established in 1882, a wooden building was erected. That building was moved to another location in Wahoo and a second building was constructed. The second building stood for a few years before it was replaced in 1919 by the limestone structure that remains standing today.

The building has undergone several renovation projects over the years, said Krejci, including a major overhaul in 1960 that covered the stone between the windows with brown tin, which was recently removed. The tin was also placed in the bank’s entrance. Unfortunately, the stone was removed behind it, so the tin was left alone. However, there are plans to restore the entrance to its original appearance, Krejci added.

The drive-thru/walk-up portion of the bank were also added during the 1960s renovation. Krejci said they had not been using that area of the building in recent years, but the COVID-19 pandemic changed that. When the virus closed down many public businesses in Wahoo, the bank used the walk-up entrance to allow customers in the bank in a controlled area.

In recent years, efforts have been made to modernize the structure. Windows were replaced a decade ago. The lobby was remodeled two years ago and last year a new heating/ventilation/air conditioning system was installed. This year the focus is the outside of the building, Krejci said.

“It’s always been an ongoing project first of all to maintain and protect the building,” he said.

Preserving the structure’s “priceless” limestone exterior is the most notable aspect of the project. Local residents and business owners have expressed interest in the work that is being done, according to Krejci.

“It was the talk in the community,” he added.

Krejci said building a structure out of limestone now would be cost prohibitive.

“You could never duplicate that in today’s environment,” he said.

Jem Restoration Services of LaVista was hired to handle the delicate task of renewing the exterior to its former glory. Crevices were stripped of dirt and debris and mortar was carefully placed in areas where it had begun to deteriorate. Sunlight, age and dirt have taken their toll on the building over the years. Cleaning the limestone made a big difference in the structure’s appearance, said Vice President Audrey Vaught.

“It’s amazing how much brighter and nicer it is,” she said.

Details that were hidden before now stand out, Vaught and Krejci said.

“It makes a difference,” said Krejci. “There is so much detail in the building.”

The building’s south side is made of concrete block, so the exterior renovation did not include that wall. The focus was on the sides made of limestone, Krejci said.

Once the exterior project is done, there will be future areas to repair or maintain to keep the building standing for many more years, said Krejci.

“This building’s got so much character, it’s nice to try and keep everything maintained and cleaned,” he said. “We want it around for another 100 or 200 years more.”

WAHOO – For the past seven years, Steve Epp has been carrying a huge cross across the United States in an effort to bring Jesus to the streets…

WAHOO – When her son’s bench honoring his life was installed along Lake Wanahoo’s trails near the disc golf course in 2017, Joni Wimmer began …

WAHOO – Megan Shada said her most cherished memory of her grandmother, Rosemary Koranda, or Grandma Rose, was baking with her.

WAHOO – A Malmo man accused of murdering his fiancé has pleaded not guilty.

County board moves ahead with divisive subdivision

WAHOO – On Sept. 1, the Saunders County Board of Supervisors held their weekly meeting, but this meeting deviated from the normal happenings o…

WAHOO – Taylor Bohac never wanted to be a cop.

A NEW LOOK: Restorations to the FirstBank building in Wahoo are made on Friday. (Staff Photo by Elsie Stormberg)

HISTORY: Workmen sit atop the First National Bank building in Wahoo several decades ago. They appear to be doing work to maintain the exterior, a project that is being done again on 101-year-old structure.