Receive the latest in local entertainment news in your inbox weekly! 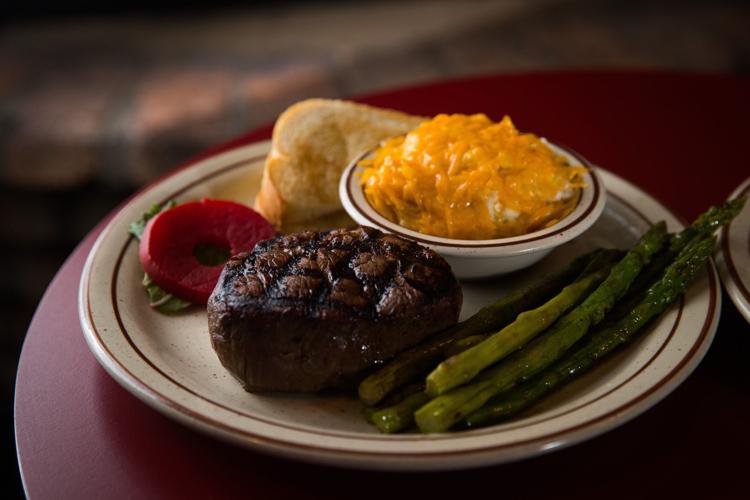 The Drover's Whiskey Filet is served with asparagus, toast and the au gratin potato casserole. 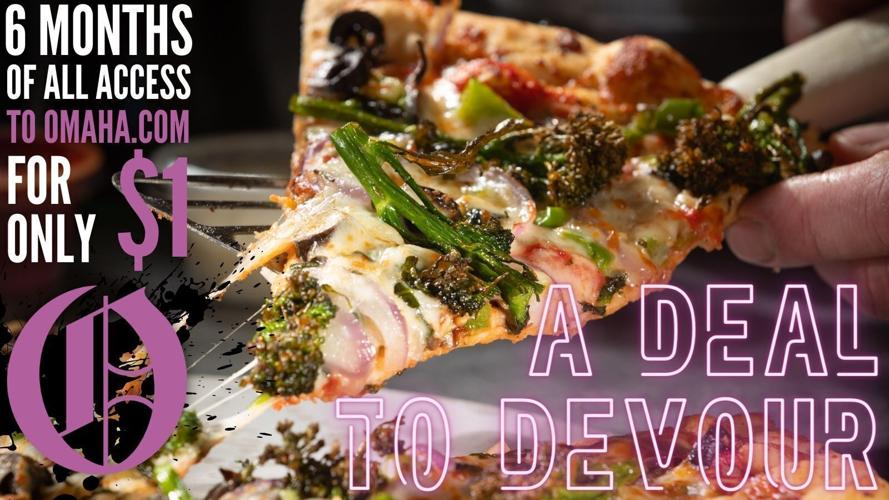 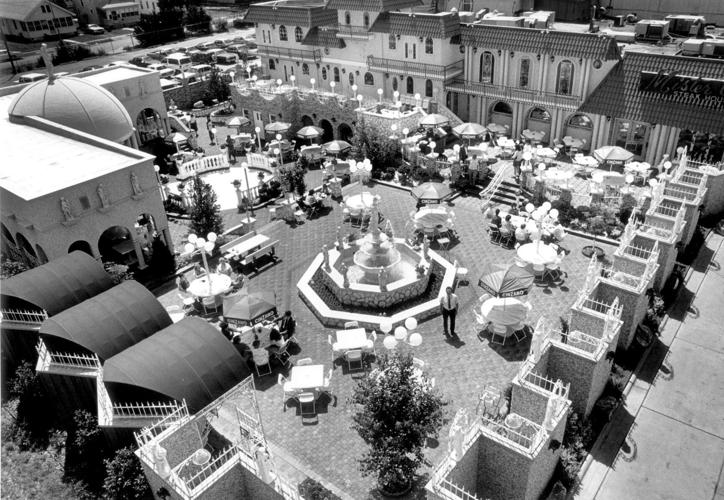 “Nowhere in the entire world will you find better steaks! These leading steakhouses are ready to serve you … when you come to Omaha.”

So proclaimed a two-page advertising spread in the June 9, 1957, World-Herald that seems a good launch point for a look back at more than a century of locally-owned steak restaurants.

Omaha’s first restaurant to advertise itself as a steakhouse, in 1917, was Louie Ahko’s. He had been a restauranteur since 1909 whose establishment on Douglas Street was destroyed by fire in 1916. He reopened in 1917 at 1417 Harney St. as a “new and thoroughly up-to-date chop and steakhouse.”

Henry H. Smith’s steakhouse opened in 1929 at 514 S. 16th St. Smith had been serving steaks at Smith’s Sea Food House at 25th and Farnam Streets, and he opened a second steakhouse at 2407 N St. in 1930. After Smith died in 1940, Omaha Knights hockey star Phil Besler bought the restaurant when it was at 1512 Howard and renamed it for himself.

Comento’s Café, at 801 S. Seventh St., opened about the same time as Smith’s, Cascio’s co-founder Al Cascio recalled in a 1979 World-Herald article. Owned by Salvatore Commendatore, known in Omaha as Sam Comento, it lasted until 1947.

For years, the “Omaha Corn Fed Steaks” neon sign was a beacon for Trentino’s and later Angie’s at 1112 S. 10th St. Opened as a burger joint by the Firmature and Salerno families in 1933, it upgraded to steaks by 1938. Trentino’s was sold in 1976 and renamed Angie’s (through 2007). It reopened as Lucky’s ten-O-one for about a year. The building is now the Bluebarn Theater.

Before filet mignon became a high-priced meal, railroad contractor Louis Marchio used the cut to make his “Marchio Polo” dish of sautéed slices of filet with spaghetti, mushrooms and tomato sauce.” His Italian Cafe, 4443 S. 13th St., was open by 1932. The family sold it to Arlan and Rose Broome, who owned it from 1976-1985, rebuilding after a fire in 1980.

Piccolo Pete’s, 2202 S. 20th St., (1934-2015) began as a tavern whose name came from a popular song. “Omaha’s most beautiful beer garden” first advertised steak dinners in 1937. Owner Anthony Piccolo Sr. married into the Caniglia family, when he married Grace. The restaurant’s piccolo player neon sign was installed in the 1960s.

Italian Gardens at 1228 S. Sixth St. recovered from being firebombed two days before Benna Marcuzzo was to open the family tavern in 1934. It closed in 1968 and the building enjoyed later life as the Continental cuisine Café de Paris.

Sam Nisi’s “internationally known” Sparetime Café, where diners could select their steaks (as highlighted in the Saturday Evening Post), opened in 1939 at Fifth and Pierce Streets. The family moved the Sparetime to 703 S. 72nd St. (the former Angelo’s Studio Inn, 1956-1962), sold it in 1971 and repurchased the original site in 1978. It closed in 1982.

Jack Holmes steakhouse, 5002 Center St., was a favorite of the Omaha Knights hockey crowd. Frank and Marguerite Vairo opened it in 1946, then sold after a year to Holmes. He continued its charcoal-broiled steaks (it claimed to be the first in town) and barbecued meats over “hickory embers” from 1947 to 1963. Nuncio Pomidoro then operated it for three years as Nuncio’s.

Johnny’s and Jerry’s Drive-Inn (1949-1955) at 30th Street and Bedford Avenue has been one of the few Black-owned steakhouses and perhaps the first. It had a full-time orchestra and was one of North Omaha’s jazz hotspots.

Another strip for steaks was developing along Dodge Street, and later branched off on 72nd Street as Ak-Sar-Ben Thoroughbred horse racing began drawing out-of-state bettors. Oh, that parade of buses every weekend from Kansas City in the 1970s into the 1980s.

The first was Green Gable Inn (1933-1950), which became Kenny’s, 7205 Dodge St. (1950-1988), the latter operated by Kenny and Edie Jensen and Kenny’s sister Bette Edwards. The Jensen’s father, O.C., ran the Elmwood Dairy on the Crossroads land and got the Kenny’s corner (the site of the future city library) in an exchange with a Realtor whose family couldn’t pay its milk bill during the Depression.

Down 72nd Street past Kenny’s, Eli Caniglia’s Venice Inn was next at 6920 Pacific St. (1957-2014). Among those who entertained in the Cascade Lounge — it had a sunken bar, stage and indoor waterfall — were comedians Rowan and Martin. Davey “Nose” Bold was the in-house comic eight months a year who brought in the headliners at the Ak-Sar-Ben member shows.

At F Street was Anthony’s (1967-2022). Tony Fucinaro’s signatures included Johnny Ray Gomez in the lounge and the plastic steer that was installed on the restaurant roof in the early 1970s. The steer sold for $45,000 at auction to a truck stop in Columbus, Nebraska, earlier this year.

But steakhouses in the golden era were at all compass points around town.

One of the most beloved was Mister C’s, 5319 N. 30th St. (1953-2007). Starting in 1964, Sebastiano (Yano) Caniglia and his wife, Mary, transformed Caniglia’s Royal Boy drive-in (originally Marshall’s) into a 1,400-seat steakhouse with its uncountable Christmas lights and Italian dioramas, strolling musicians, minestrone soup (but not on Thursdays and Saturdays) and Mister C himself.

In Waterloo, Farmer Brown’s Supper Club was the original name for the steakhouse going strong since 1965. Before Farmer Brown’s the building was home to Seltz’s (1963-1965) and Zimmerly’s. Across the village was Harr’s (1971-2007), which Sol Haar moved from Fremont.

Now for the Big Three.

Former bootlegger Louis Gorat and his wife Nettie opened Gorat’s at 4917 Center St. on Columbus Day 1944. Louis Jr. — “Pal” — and his family ran it for years until they sold to Gene Dunn in 2012. Omaha billionaire Warren Buffett has been a frequent diner, as he was at Piccolo Pete’s.

Johnny’s Café dates to the Prohibition-era soft-drink parlors (wink, wink). From our archives, which do differ with family legend, Frank Kava (Kawa) opened his first one in 1922 at 4516 S. 24th St. across from South High School. By 1927 he had moved closer to the thirsty packinghouse workers at 4636 S. 27th St. and “the reputed South Omaha ‘beer baron’” was still there as of 1932.

Between then and December 1934, Kawa moved his business (now able to sell liquor legally) across the street to atop the George Hoffman packing plant building. Johnny’s Café — the name is said to have been on a sign already on the building — started with a small bar, four tackles and a lunch counter. He expanded the restaurant three times before his death in 1955, with the packing plant still operating below it. Sons Jack and Tom upgraded Johnny’s to a formal restaurant in 1966.

In its tribute story to Kawa in 1961, the South Omaha Sun wrote that Kawa was “the man generally credited with pioneering Omaha’s reputation as a steakhouse town.” Want early proof?

Wrote New York syndicated columnist Dale Harrison (who had worked in Omaha) in May 1939: “Went for dinner to Johnny’s Cafe in South Omaha, for it neighbors the great stockyards and I would not travel so far without feasting on Omaha Porterhouse. New York has excellent steaks, for the choice cuts are shipped east, but none could be better than that I had at Johnny’s at half the New York price.

“Eating, I was disturbed by two cowboys who got great enjoyment from discharging .38 caliber pistols under my chair, the flames leaped foot from the barrel. A policeman wandered in, observed the gunman, smiled tolerantly, and wandered out. I coaxed the westerner to let me fire his gun, and when I had it in hand I blazed away merrily at his feet; whereupon he shouted in alarm: ‘Hey! You’ll burn my legs!’ To which my sneered reply: ‘It makes a difference whose legs get scorched, doesn’t it?’ I could hardly finish the meal, so choked was the room with gunpowder fumes.”

Here’s to Johnny’s, celebrating its centennial year. And to all the other Omaha-bred steakhouses past and present. Leave the guns at home, and they’ll supply the knives.

Receive the latest in local entertainment news in your inbox weekly!

Simu Liu reveals he is 'going through a breakup'

Simu Liu reveals he is 'going through a breakup'

The Drover's Whiskey Filet is served with asparagus, toast and the au gratin potato casserole. 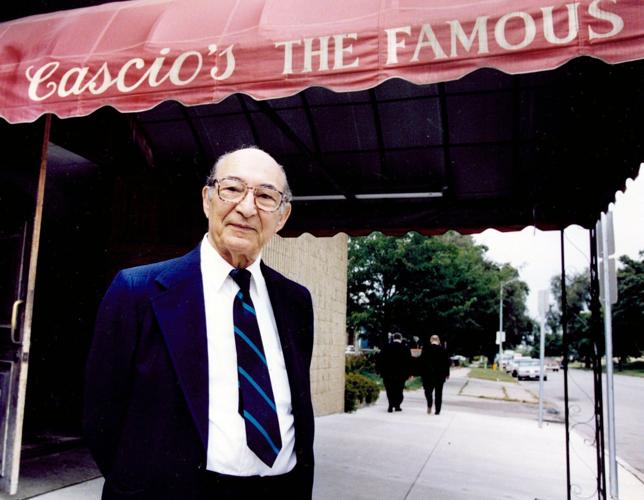 In April 1946, Cascio brothers Joe and Al, seen here in 1993, opened the steakhouse at its current location. 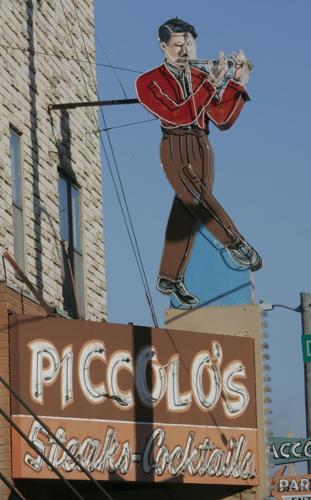 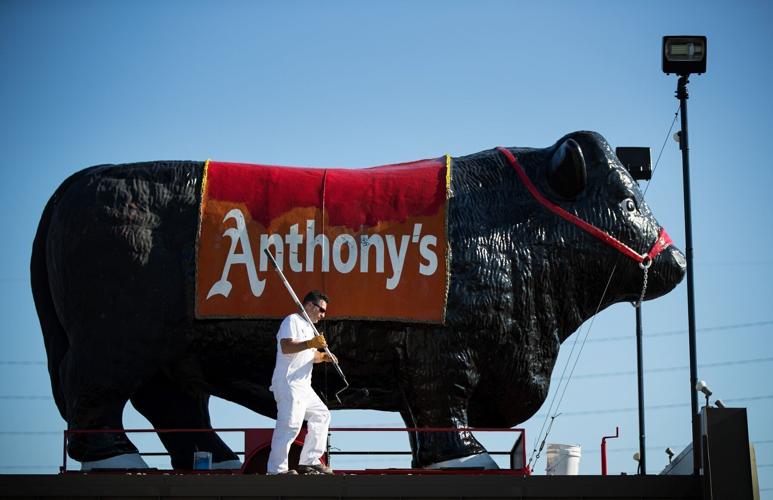 Mike Gurciullo repaints the giant steer atop Anthony’s Steakhouse in 2017. The steer was moved to Columbus after it sold at auction earlier this year.