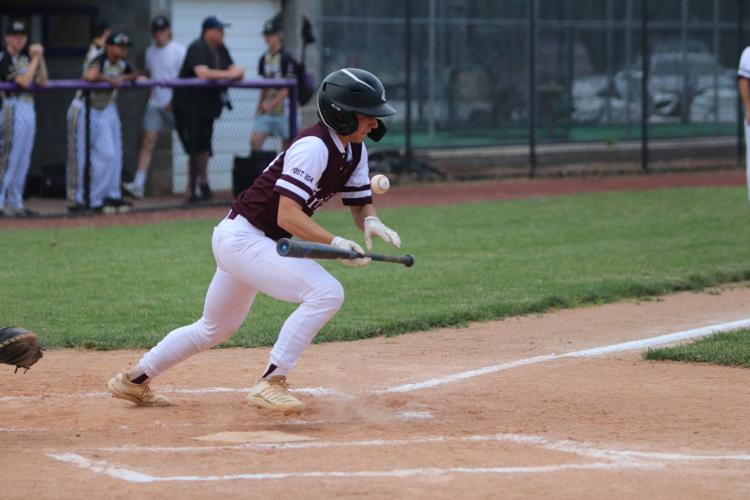 BUNT DOWN- Tyler Wiexelman of the Waverly Empire Netting and Fence juniors lays down a bunt against Nebraska City on June 7. He had one hit and one RBI in the 20 run victory. 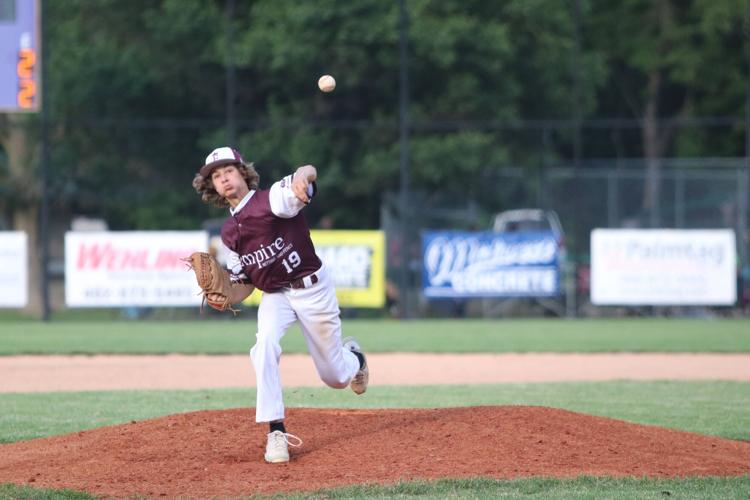 PAYOFF PITCH- James Schmidt of the Waverly Empire Netting and Fence juniors pitches against Nebraska City on June 7. He came on for one inning of work and ended up recording two strikeouts in a 21-1 victory.

NEBRASKA CITY – It didn’t take long for the Waverly Empire Juniors to display their dominance as they took down Modern Real Estate 21-1 on June 7. In total, Waverly was able to pile up 15 hits in four at-bats.

Empire’s biggest innings of the contest were the second and the fourth where they scored eight and then 10 runs.

With a 3-0 lead and the bases loaded in the second, Nash Peterson scored on a passed ball. The next batter, Bruin Sampson, singled to center scoring two and Nate Leininger drove in another run with a single to the shortstop increasing the Juniors’ edge to 7-0.

Back-to-back errors and a hit-by-pitch issued by Nebraska City pushed Waverly’s advantage out to double digits at 11 runs.

After being held scoreless in the third, Empire started the fourth off with four singles from Tyler Wiexelman, Hunter Thoms, Elijah Russel and Hunter Claycomb. The hit by Claycomb to left field produced the 12th run of the game.

Nebraska City wouldn’t get their first outs of the inning until Waverly had already driven in their 15th run of the contest.

Two of the final four runs were produced by singles from Russel and Phillips. Walks ended up being the way the other two runs came home.

Coming up with two hits and three RBI in the huge win were Phillips and Maahs. Sampson had two hits and two RBI, while Wiexelman, Schmidt, Maahs, Leininger and Thoms all had one run driven in.

Zach Schwang started the game and pitched three innings, gave up one earned run and recorded two strikeouts. Pitching one inning in relief with two strikeouts and no runs allowed was Schmidt.

Over the weekend, Waverly helped put on a Junior tournament with the Ashland Junior team. They finished the tournament with a mark of 2-1, beating the Chick-Fil-A Juniors 16-0 and York 7-0 on June 11 and falling to Primetime Westview 8-3 on June 10.

In a blowout victory over Chick-Fil-A to start Saturday, Empire was able to do most of their damage in the bottom of the second with eight runs.

At this point of the game, Waverly was already up 1-0 when Maahs and Schmidt both came up with singles. After a walk loaded the bases with one out, Thoms, Schwang and Phillips all singled, scoring four runs and putting Empire in front 5-0.

Later in the inning, Russel tripled to center and Maahs hit a sac fly to center, pushing the lead for Waverly out to 9-0.

In the bottom of the third, Schawang singled to short, Phillips tripled to center, Leininger singled to third and Humphrey singled to center to score four runs. Three more runs were tacked on by Empire in the fourth on singles from Phillips and Leininger and a double by Russel.

Pitching two innings with one strikeout in the win was Schwang and Thoms went one inning and had two strikeouts. Also pitching one inning was Wiexelman, who gave up no runs, and Maahs, who registered one strikeout.

Waverly followed up their rout of Chick-Fil-A by throwing a shutout against York.

Empire scored their first run of the contest in the second inning when Maahs grounded out, scoring Phillips on third.

The bottom of the third started off with Waverly’s Thoms singling, Schwang being walked and Sampson being hit by a pitch to load the bases. A walk by York scored one run and a passed ball allowed Schwang to get home and make it a 3-0 game.

During the same at-bat, Leininger grounded out to the shortstop, driving in Sampson, and Maahs singled to second plating another run. With two runners in scoring position, Humphrey hit a ball to right field, scoring both base runners and increasing Empire’s lead to seven.

Humphrey and Maahs both had one hit and two RBI in the win and Leininger had one run batted in. Pitching three innings with no runs given up and five strikeouts was Phillips.

Against Primetime Westview, Waverly was able to score runs in three innings compared to just two for the Wolverines. The difference came down to Empire only being able to squeak out one run in the second, fourth and fifth where Westview had four spots in the second and the sixth.

Thoms and Leininger both had one hit and one RBI, while Maahs finished with one run driven in. Starting the game on the mound was Leininger who went 3.1 innings, gave up four earned runs and had two strikeouts, Russel pitched 2.1 innings, with three earned runs given up and three strikeouts and Schmidt went 0.1 innings with one earned run given up.

This week the juniors played at Ashland on June 14.

SEWARD, Neb. – One of the top leadoff men and second baseman in the nation, Jay Adams pulled in All-America accolades, as announced by the NAI…

WAVERLY – The family of John and Eileen Lindahl of Waverly is requesting a card shower in honor of their 50th wedding anniversary. They were m…

OMAHA- For the last time, the best senior soccer players from across the state of Nebraska suited up for the Nebraska High School Senior Socce…

BUNT DOWN- Tyler Wiexelman of the Waverly Empire Netting and Fence juniors lays down a bunt against Nebraska City on June 7. He had one hit and one RBI in the 20 run victory.

PAYOFF PITCH- James Schmidt of the Waverly Empire Netting and Fence juniors pitches against Nebraska City on June 7. He came on for one inning of work and ended up recording two strikeouts in a 21-1 victory.