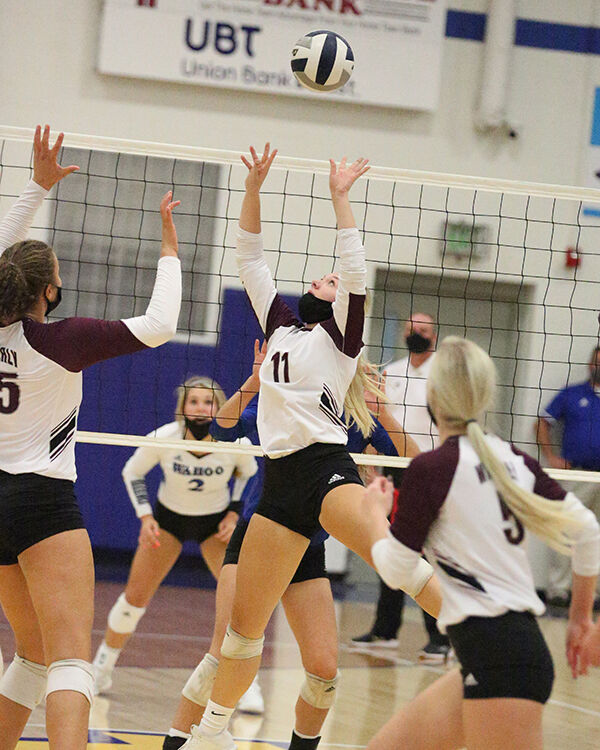 JUMP SET: Waverly senior setter Maddy Wells does her best to get the ball to one of the Viking hitters along the front row during the Vikings road contest with the Wahoo Warriors on Oct. 6. (Staff Photo by Jason Unger) 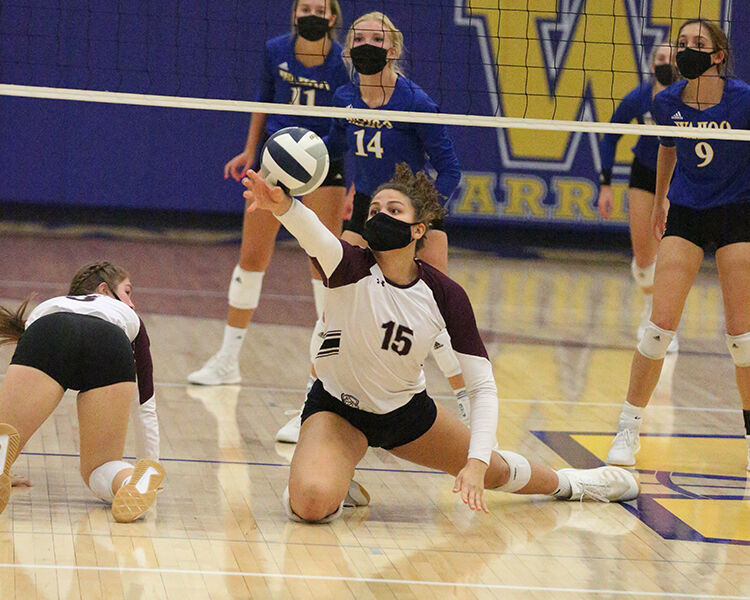 Prior to competing in the conference tournament the Vikings split a pair of matches against undefeated and top-ranked Wahoo and the Bennington Badgers.

Viking Coach Terri Neujahr was not happy with her team’s play in the first two sets.

“It’s like we didn’t even show up in sets one and two, it took us forever to get going,” Neujahr said.

Wahoo was more efficient at the net offensively, hitting .236 compared to just .167 for the Vikings.

Senior Whitney Lauenstein led the way offensively against the Warriors piling up 20 kills in 44 swings. Senior Bailey Jeffers came through with seven kills against Wahoo.

The Warriors were able to neutralize the Viking serve the entire night, limiting the Vikings to just four aces.

The Vikings bounced back with a win two nights later at home against Bennington.

Waverly was more efficient at the net offensively, hitting .313 while piling up 40 kills.

Lauenstein racked up 20 more against the Badgers. Jeffers added 11 more.

Vanscoy piled up 18 digs and senior Kila Jordon came through with 12 more.

Wells and Hannah Allick combined to hand out 24 set assists.

Vanscoy and Jordon led the team in serve receive.

The Vikings opened conference play with a 25-13, 25-13 victory over the Blair Bears.

Waverly hit .288 against the Bears and finished with eight ace serves in the two sets.

Lauenstein led the team with nine kills and teammates Mackenzie Scurto and Mady Bannitt added four more while filling in admirably for Bekka Allick who missed the match with an injured ankle.

Lauenstein and junior Emelia Rourke combined to lead the Vikings with eight and six digs respectively.

Wells handed out 10 assists and she added two service aces.

The win advanced the Vikings into the semifinals against the Elkhorn Antlers.

Lauenstein was dominant at the net, finishing with 26 of the team’s 31 kills.

The Vikings missed on just one of their 54 serves, but aced on only three of them.

Vanscoy dug up 21 balls along the back row.

Twenty-three kills by Lauenstein upped her season total to 342 in 22 matches.

The Vikings were efficient from behind the service line and missed on just five of their 67 attempts.

Vanscoy (18) and Lauenstein (17) led the Vikings in the digs category. Vanscoy leads the team with 254 digs on the year.

Wells dished out 19 set assists against North. She has 331 assists on the year.

The 2-1 finish in conference tournament play improved the Viking record to 16-6.

LINCOLN – Phil Brey was given his first guitar when he was 13 years old. When his brother gifted him the instrument in their Raymond home, he …

WAVERLY – The Waverly Vikings and coach Reed Manstedt take pride in their defense.

JUMP SET: Waverly senior setter Maddy Wells does her best to get the ball to one of the Viking hitters along the front row during the Vikings road contest with the Wahoo Warriors on Oct. 6. (Staff Photo by Jason Unger)