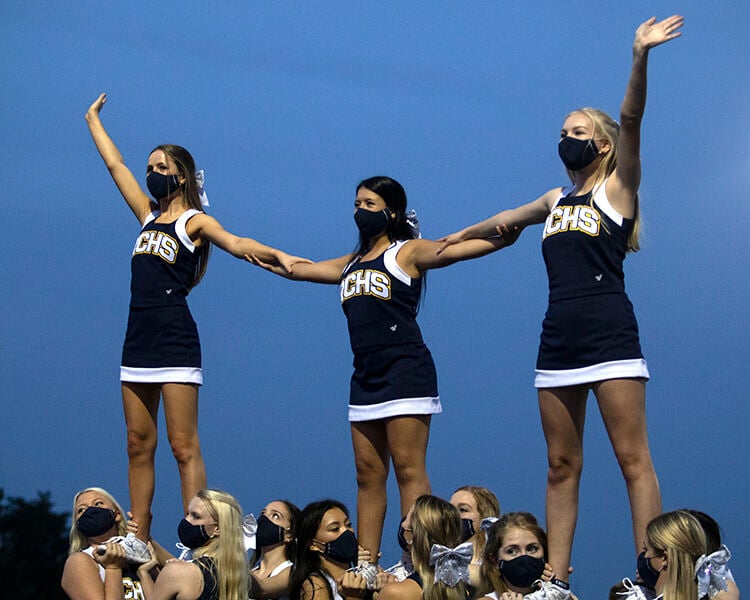 GROWTH: The Raymond Central Cheer team stunts during the game against Ashland-Greenwood on Friday in Raymond. The team was able to add stunting to their routines after Head Coach Shay Deidel presented her plan to the school board in March 2020. (Staff Photo by Elsie Stormberg) 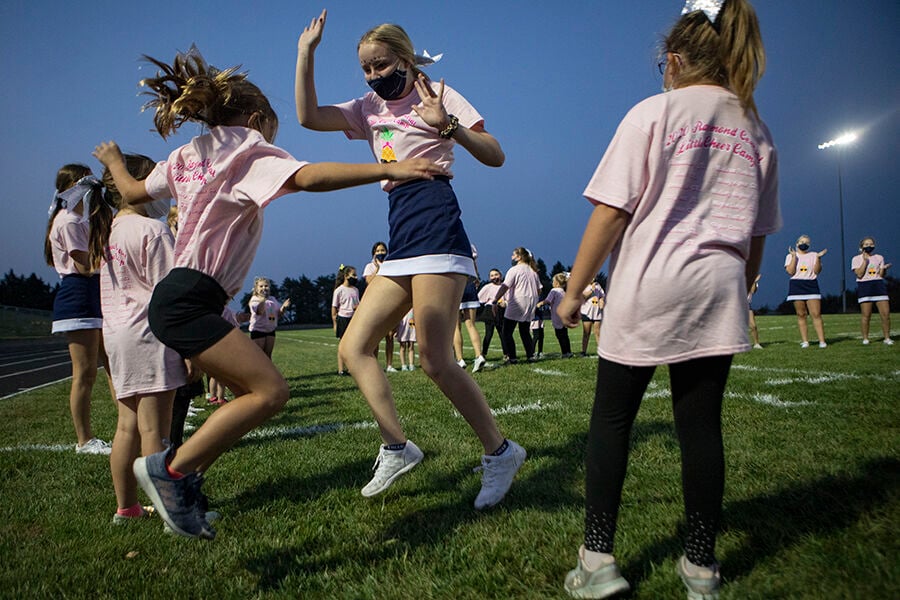 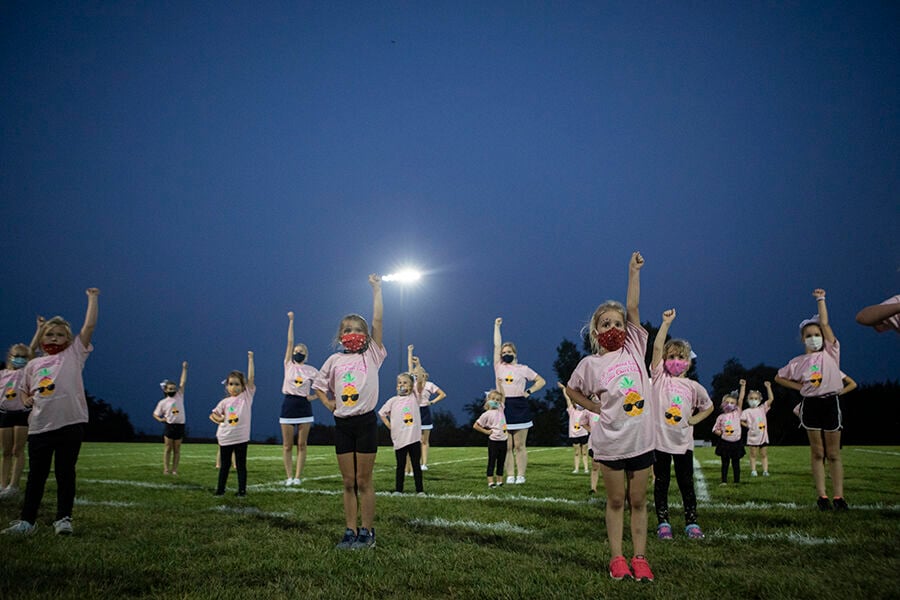 RAYMOND – When Raymond Central seniors Ellie Hula and Jenna Kranke first tried out for the cheer team in 2018 at the beginning of their sophomore year, they had no idea what they were getting into.

Since that initial tryout, the team increased from seven cheerleaders to 16 cheerleaders, had two different head coaches and are the first team in Raymond Central history to stunt and compete in state. Hula and Krenke both attribute this exponential growth and triumph to current Head Coach Shay Deidel.

In March of this year, Deidel presented her plan for including stunting in the team’s performances. With the board’s approval, the cheer team has been stunting successfully ever since.

While it is “mild stunting” Deidel said, the community and other sports teams have noticed the change in the team and are receptive to the new atmosphere the team is creating.

“Not only are our sports improving, but the atmosphere that we’re helping provide for those sports is improving,” Deidel said.

In the past, stunting was not allowed due to Nebraska law as well as the high school’s ability to provide insurance for its student cheerleaders, Deidel said. Some of the restrictions for public schools that the team still faces include not being able to do a full extension, or stretch your legs over your head and the flyer, or cheerleader at the top of the stunt, must have hands on her at all times.

After placing 10th out of 20 teams in last year’s state tournament, Deidel said the goal is to place fifth. Hula said she’s not only thrilled to compete again at state but also use their new routines. The culmination of stunting, competing at state and an increase of cheerleaders have gained the team quite a bit of respect in the Raymond Central community.

“Shay definitely changed like the mindset our fans had for cheering because like our sophomore year, you could definitely tell they weren’t responsive to our cheers at all,” Hula said.

According to Deidel, this huge upheaval and change takes a lot of time management because not only does she have to think about practices and games, she also has to think about fundraisers for uniforms, schoolwork and other sports schedules. Deidel also has her own personal life to account for as well.

“I’m a photographer, I’m a nurse and I’m now a cheer coach,” Deidel said. “I’m involved in a lot and it’s definitely taught me a lot of things, but I couldn’t dream of not ever being a cheer coach.”

Deidel said her biggest goal besides placing fifth at state for the team this year is to “keep on cheering.” Because of COVID-19, Deidel knows there’s a real chance the cheer season could get cut short which for her is heartbreaking.

“It’s terrifying to have to tell your kids you know, you don’t know when this is going to be your last game,” Deidel said. “Especially for my seniors.”

Both seniors, Krenke and Hula miss pep rallies and hope they can be reinstated in the spring semester. Krenke hopes that despite all the changes this year, he, Hula and the other returners can help to create a welcoming environment for the future of RC cheer.

“I want to include everyone and make sure that they all have a chance at feeling welcome and knowing that they belong here,” Krenke said.

Hula said she is proud to say they are a part of a team that has been able to make such an impact.

“It kind of makes me feel proud that I’m on something like RC cheer and look at how much has changed,” Hula said. “It makes me proud to stand next to Shay while she helps all of us become better versions of ourselves each year.”

WAVERLY – Waverly finally had its day.

GROWTH: The Raymond Central Cheer team stunts during the game against Ashland-Greenwood on Friday in Raymond. The team was able to add stunting to their routines after Head Coach Shay Deidel presented her plan to the school board in March 2020. (Staff Photo by Elsie Stormberg)