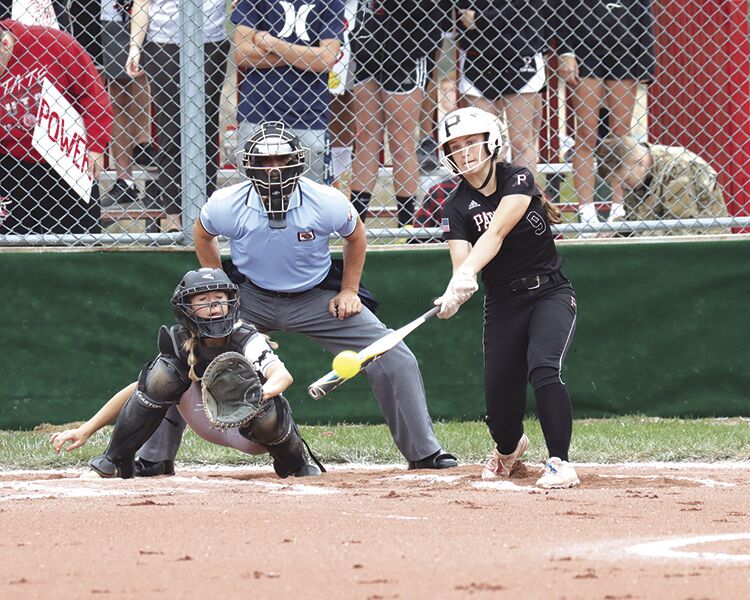 CONNECTING: Emily Hebenstreit of Yutan-Mead connects for a hit in the C-4 District Final on Oct. 9 in Yutan. (Staff Photo by Suzi Nelson) 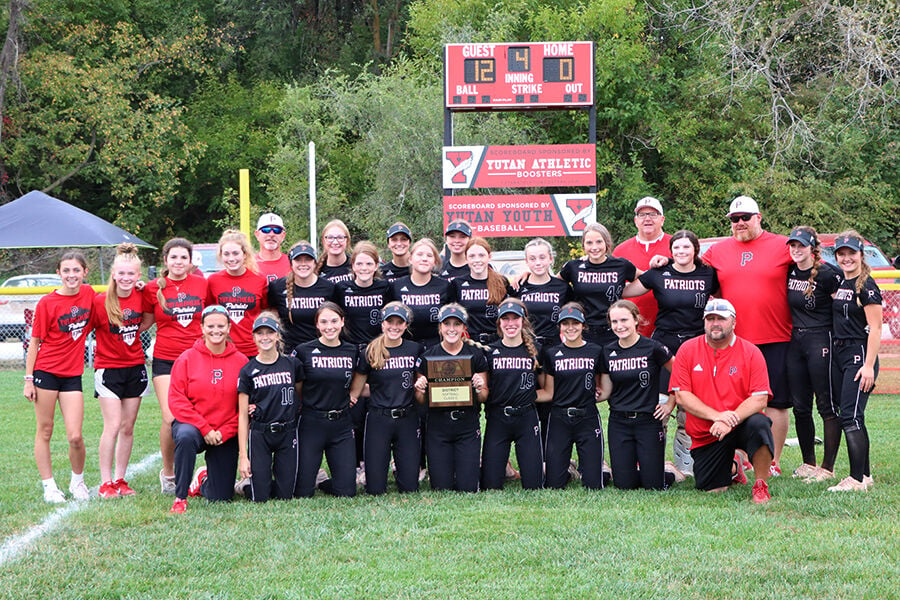 YUTAN – For the first time since 2009, the Yutan-Mead softball team qualified for the Class C State Softball Tournament with 7-2 and 12-0 victories over Aquinas Catholic in the C-4 District Final at Yutan on Oct. 9.

In game one, the Patriots had to battle back from an early 1-0 deficit against the Monarchs. They were able to do this with three runs in the bottom of the second.

The inning started out with a walk and then a double by Sophia Brennan for Yutan-Mead. Taylor Novak then flew out to left field scoring one and a double by Shaylynn Campbell drove in the other two runs.

Pitching all seven innings was Campbell, giving up three hits, one earned run and nine strikeouts. The Yutan-Mead pitcher also had the big bat with four RBI, while Watts, Brennan and Novak each had one.

The performance Yutan-Mead put up in game one energized them for their second and final game with Aquinas.

In the first inning the Patriots were able to get a single by Campbell and a walk with no outs. Emily Hebenstreit doubled to left in her at-bat and then a pop out by Brennan and an error by the Monarchs scored the other two runs.

The first two batters were once again on base in the second, when Campbell drove in a run with a sacrifice fly making it 4-0. A double by Brennan to center and a three-run shot to left by Alexis Polak tacked on six more runs in the inning.

In the bottom of the third, Yutan Mead was able to 12 run rule Aquinas when an error on the Monarchs defense scored one run and then Hansen grounded out to second scoring the other.

Watts gave up two hits in three innings of work and had seven strikeouts. Three RBIs were recorded by Brennan and Polak and Hays, Hansen, and Hebenstreit all had one run driven in.

In the Subdistrict Tournament on Oct. 4, the Patriots were able to win two close games at home. They defeated Logan View/Scribner Snyder 6-2 in the opening round and then defeated Arlington 4-2 in the Championship.

Against the Raiders in their first game, it remained scoreless until the top of the third when a single scored a run for LV/SS making it 1-0. After a Patriot batter was hit by a pitch, Campbell singled, and a catcher’s interference call loaded the bases, Kati Hansen hit into a fielder’s choice that scored Polak and tied the game up.

During the fifth, the Patriots were able to break the game wide open with a single by Hansen that scored a run, and then Brennan hit a three-run homer to centerfield making it 5-1. One more run was tacked on in the fifth when Watts scored on an error made at third by the Raiders.

Pitching three innings in the victory was Hansen, who gave up no runs and had one strikeout. Campbell pitched 2.2 innings, gave one earned run, and had seven strikeouts, while Watts pitched 1.1 innings in the contest.

Leading the team with three runs driven in was Brennan. The only other RBI recorded by Yutan-Mead in the game was hit by Hansen.

After being shut out by Arlington back on Sept. 30, the Patriots were able to exact some revenge and defeat the Eagles by two when it mattered most.

Yutan-Mead jumped out early on Arlington scoring in the first inning on an error that brought home Watts and made it 1-0. The lead was extended to two for the Patriots in the third when Hebensreit singled to left scoring Riley Hannan.

The final two runs for Yutan-Mead came on a solo homer by Brennan and then Campbell drove in the final run on a sacrifice fly.

In the bottom of the seventh, the Eagles were able to make things interesting when they hit a two-run homer with no outs cutting the Patriots lead down to two. After that, Campbell was able to lock in and get two strikeouts and a lineout to end the game.

Pitching all seven innings in the contest, was Campbell who recorded 13 strikeouts. Brennan, Hebenstreit, and Campbell all had one RBI in the victory.

Yutan-Mead who is the fourth seed in the Class C State Tournament opened up against the fifth seed Malcolm on Oct. 13. All games are played at the Bill Smith Softball Complex in Hastings.

Alex Eller is a reporter for the Wahoo Newspaper. Reach her via email at alex.eller@wahoonewspaper.com.Xxxxx

WAHOO – The date has been set for the election to recall a Saunders County Supervisor.

WAHOO – Ceresco American Legion Post 244 held a presentation ceremony at Saunders House in Wahoo on Oct. 7 for Post 244 member and Past Comman…

WAHOO – What started as a way to reduce boredom during the pandemic has turned into a brick-and-mortar business for a Yutan couple.

WAVERLY – The total assessed value for property in Waverly school district rose by over 8%, pushing the number over $2 billion and helping to …

WEST POINT – In their bid to make it back to the Class C State Softball Tournament for the first time since 2016, the Raymond Central softball…

CONNECTING: Emily Hebenstreit of Yutan-Mead connects for a hit in the C-4 District Final on Oct. 9 in Yutan. (Staff Photo by Suzi Nelson)