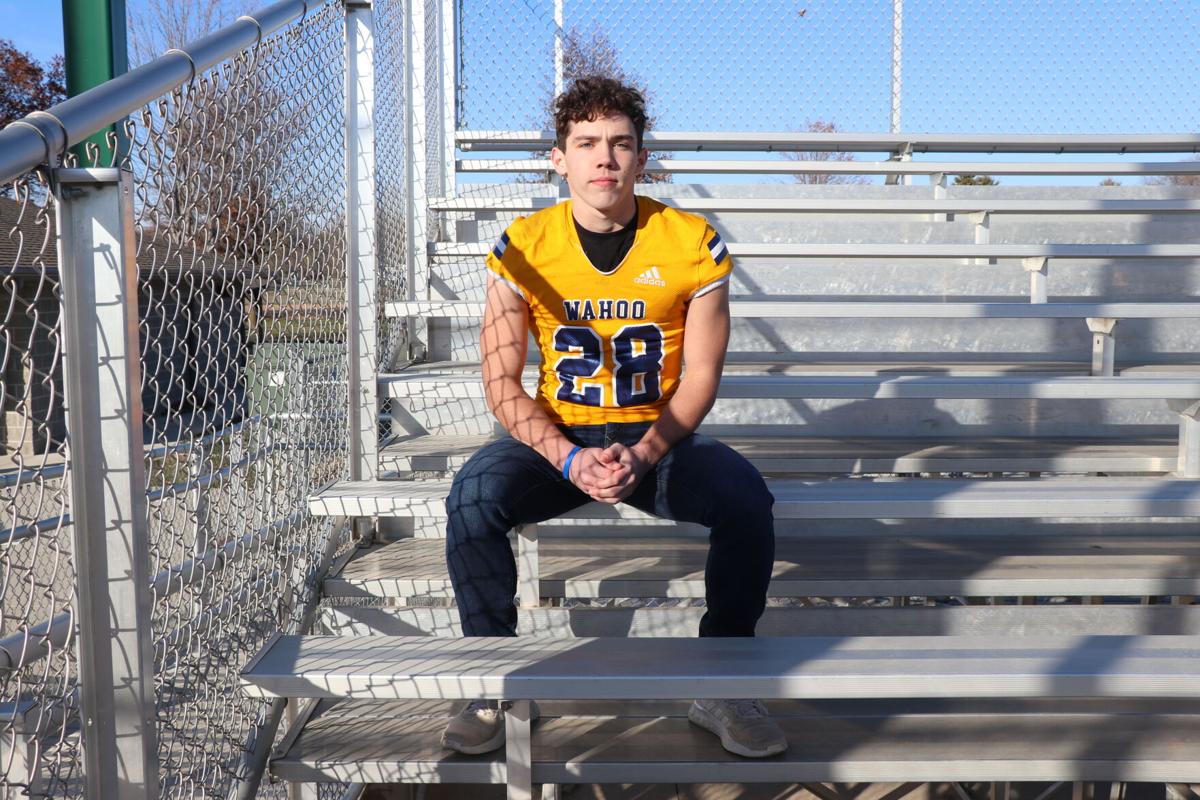 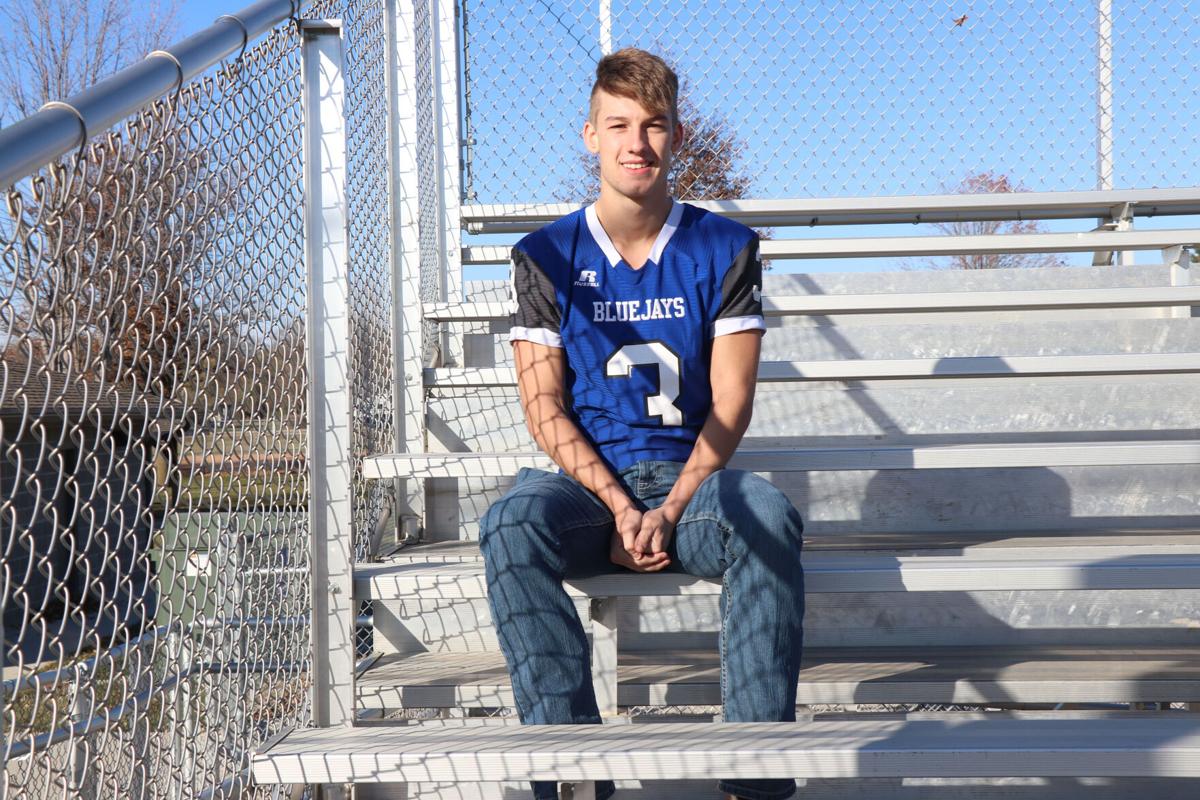 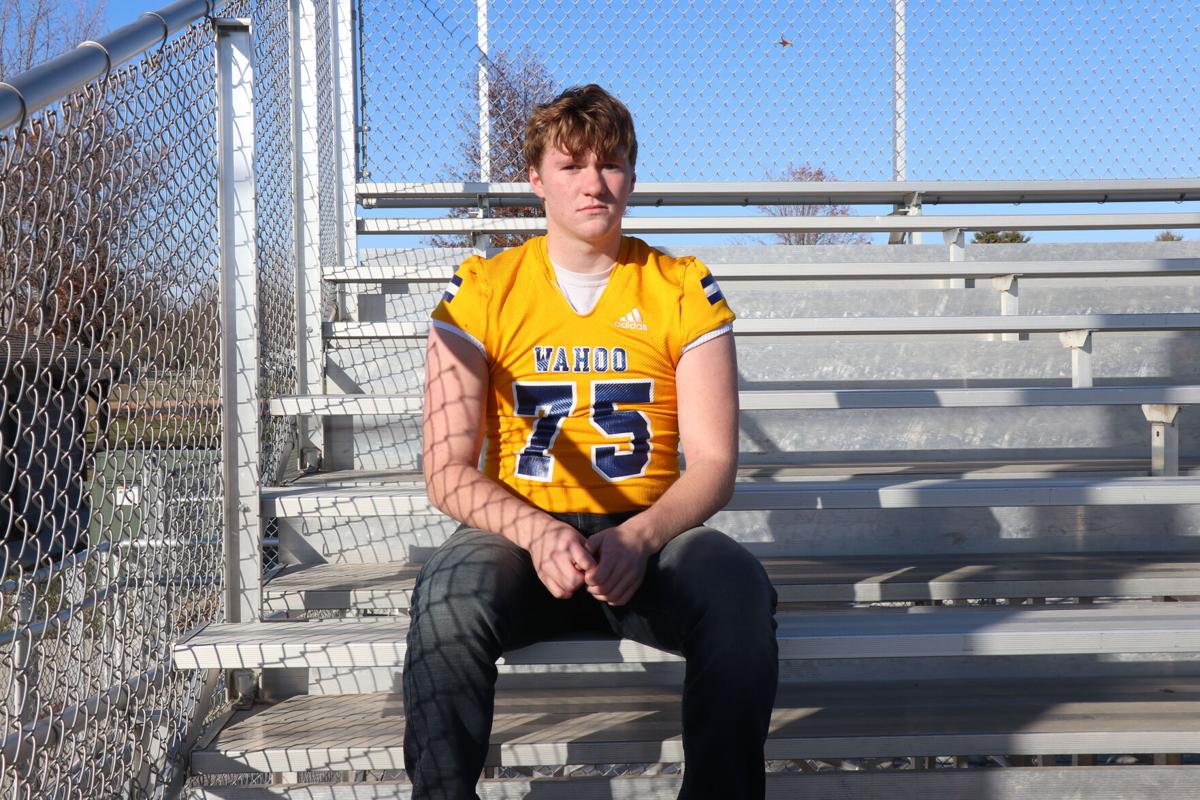 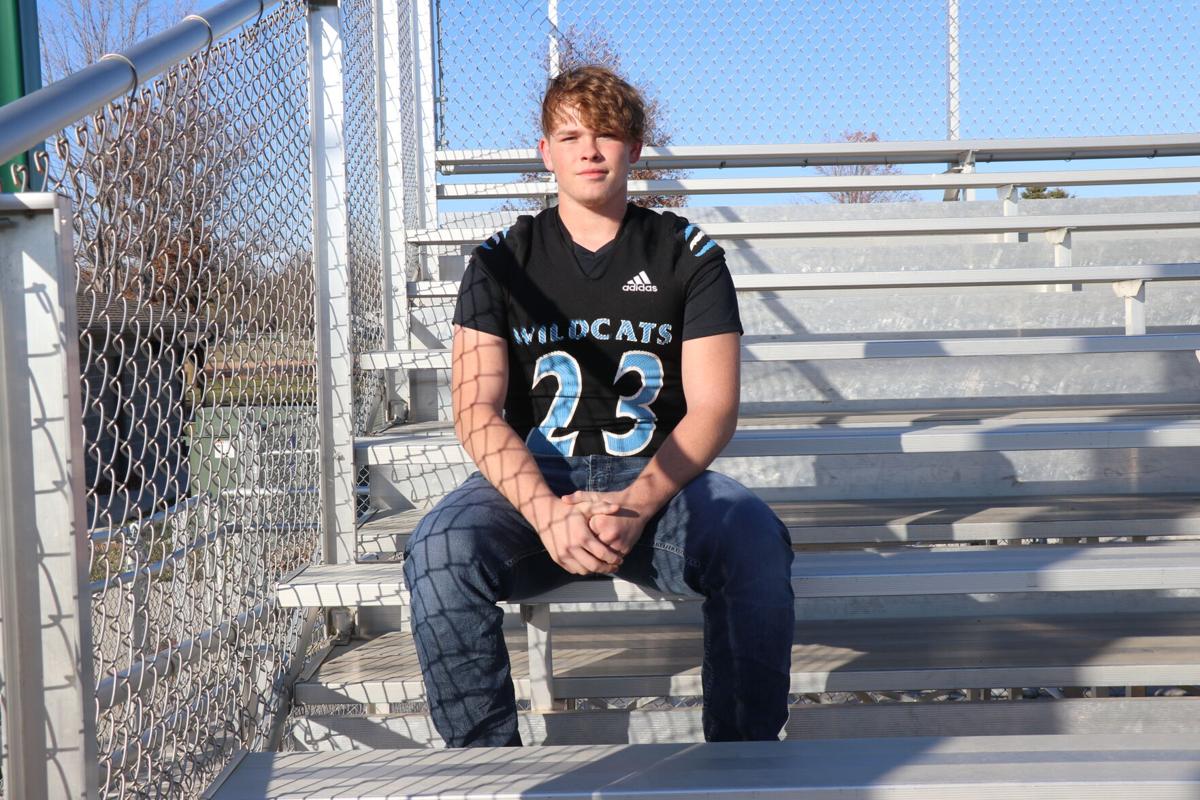 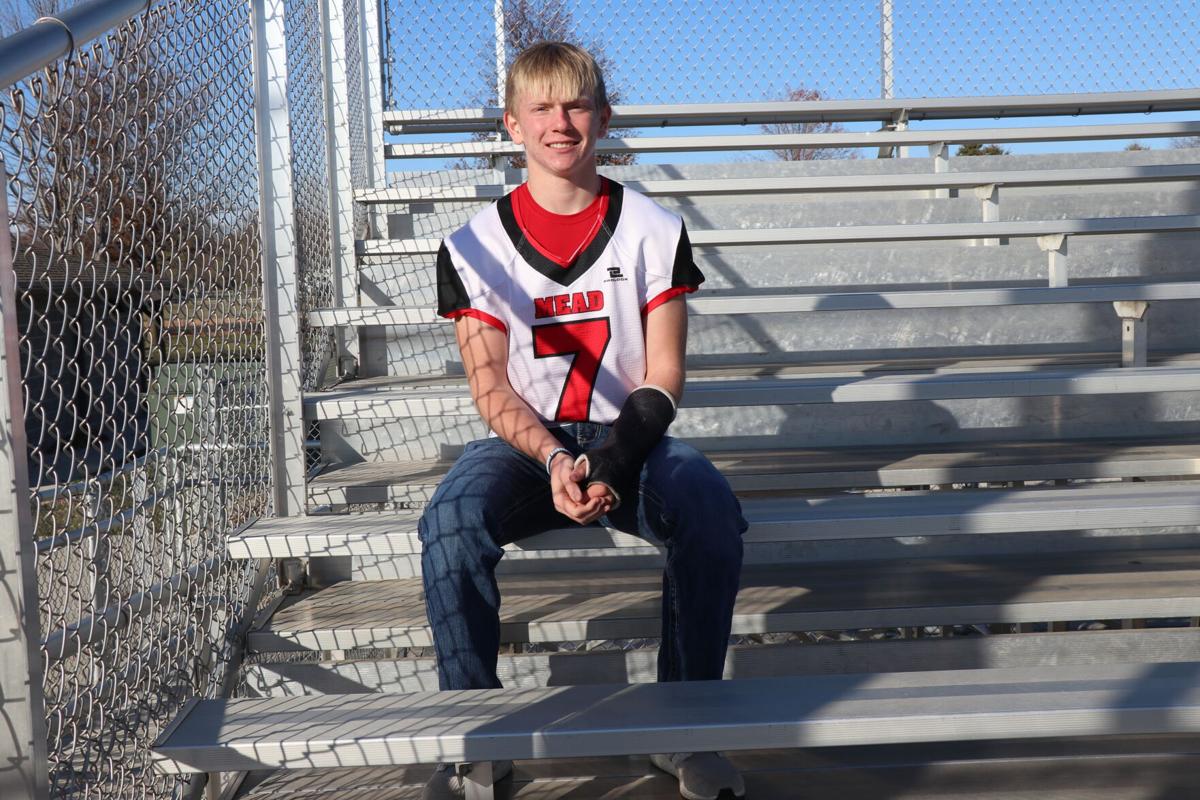 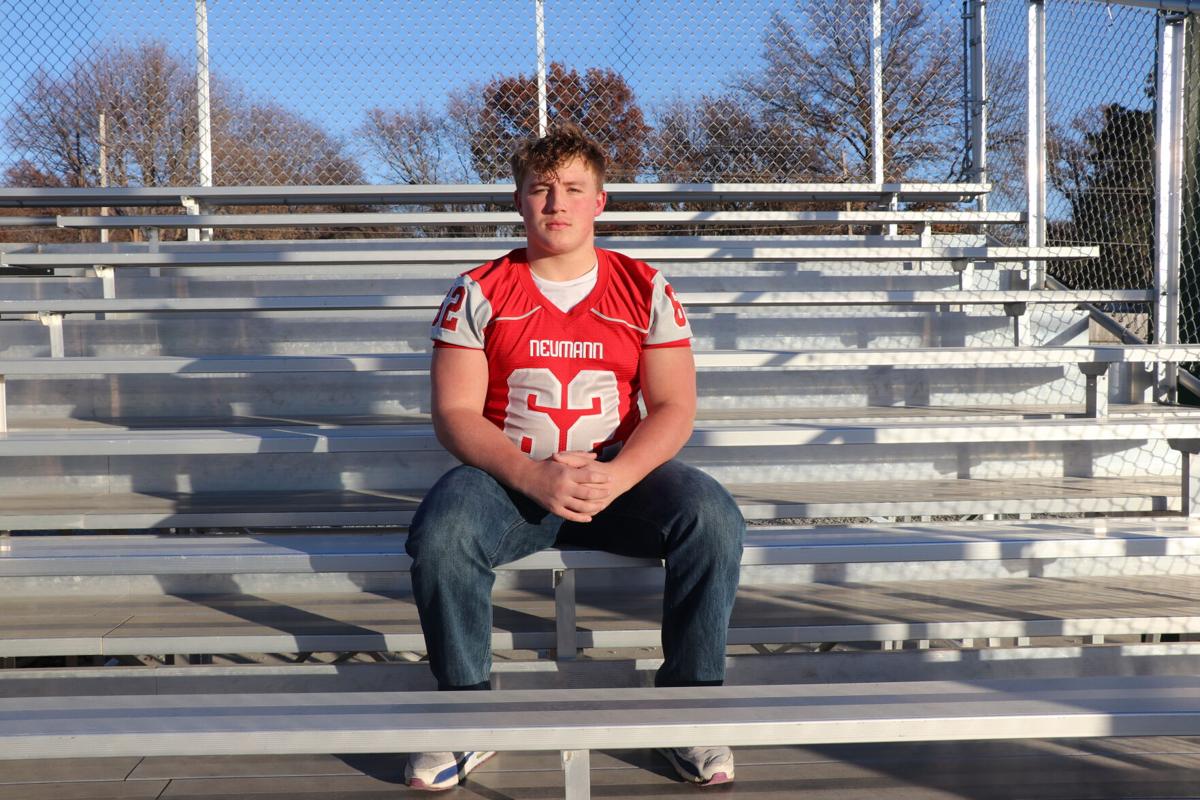 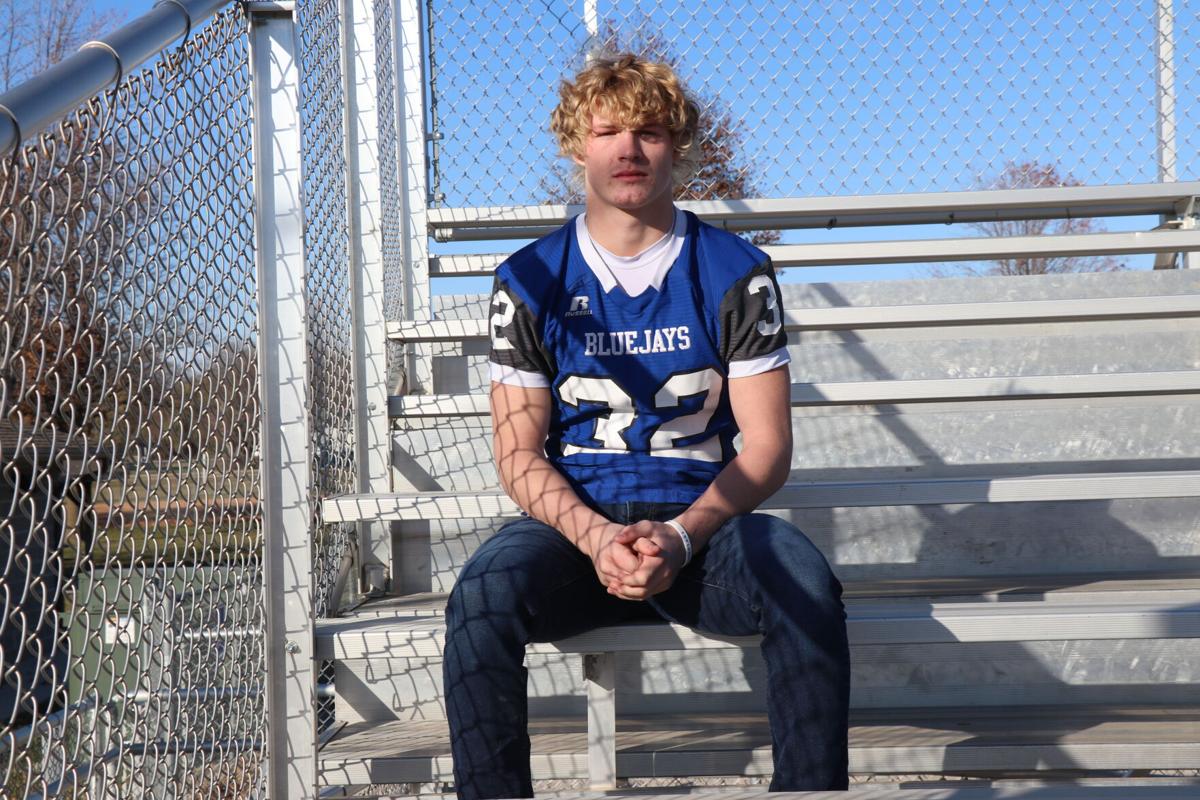 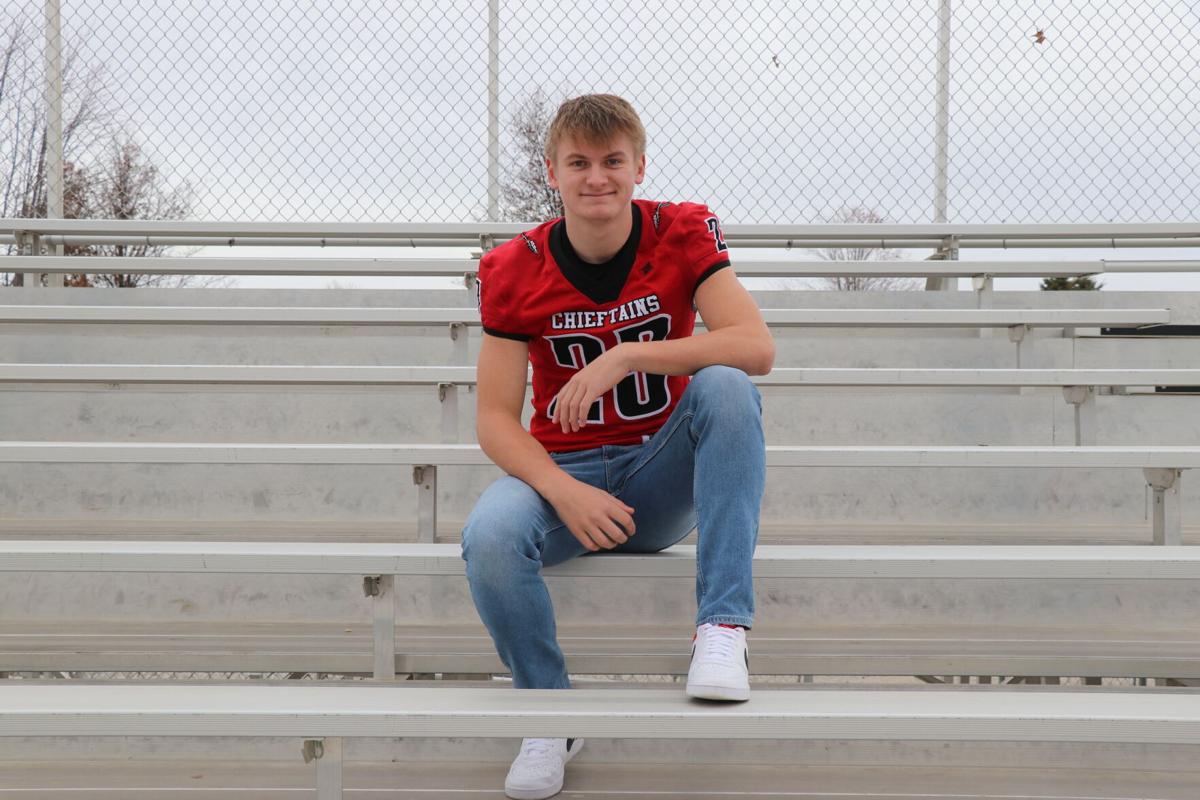 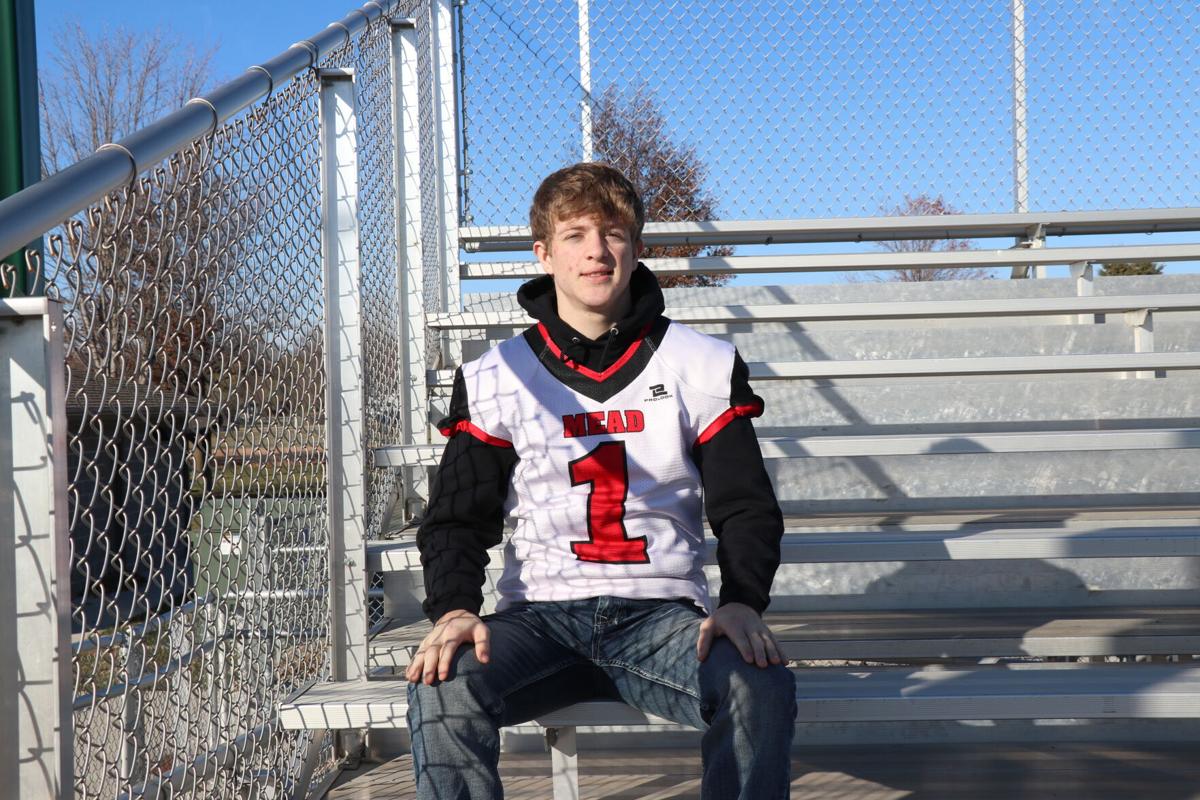 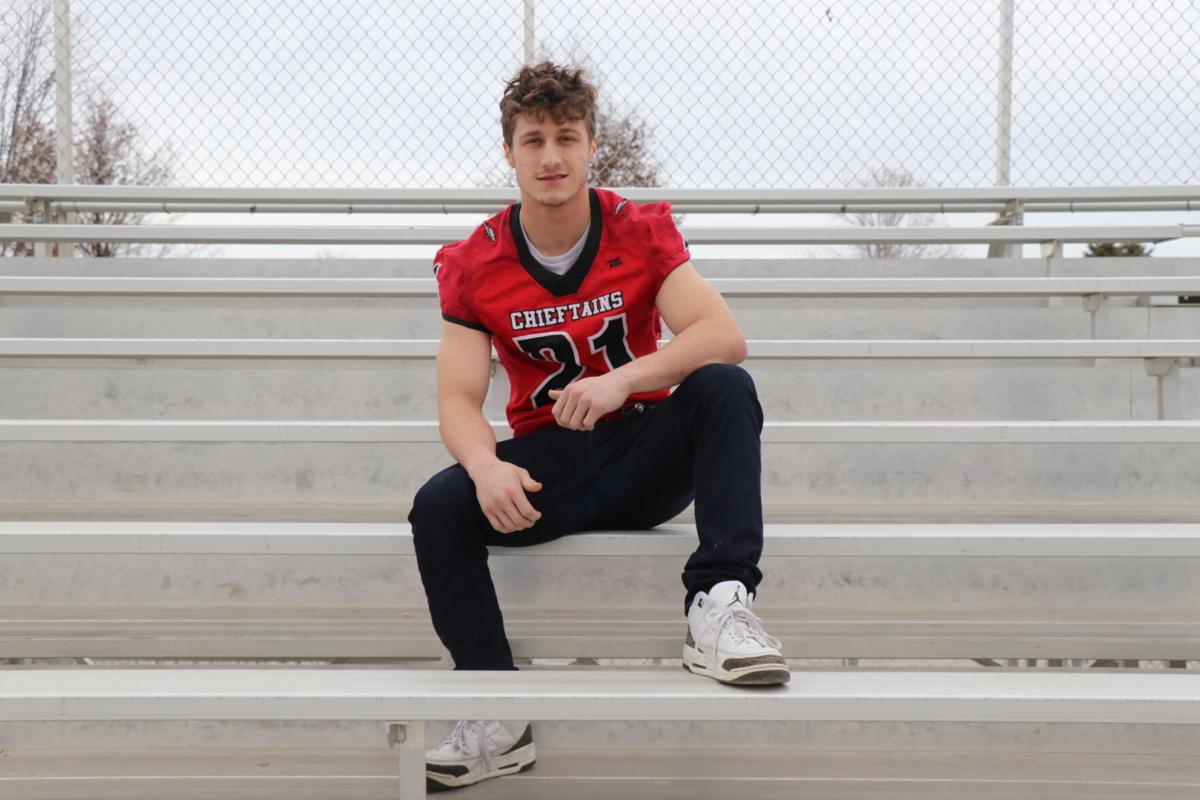 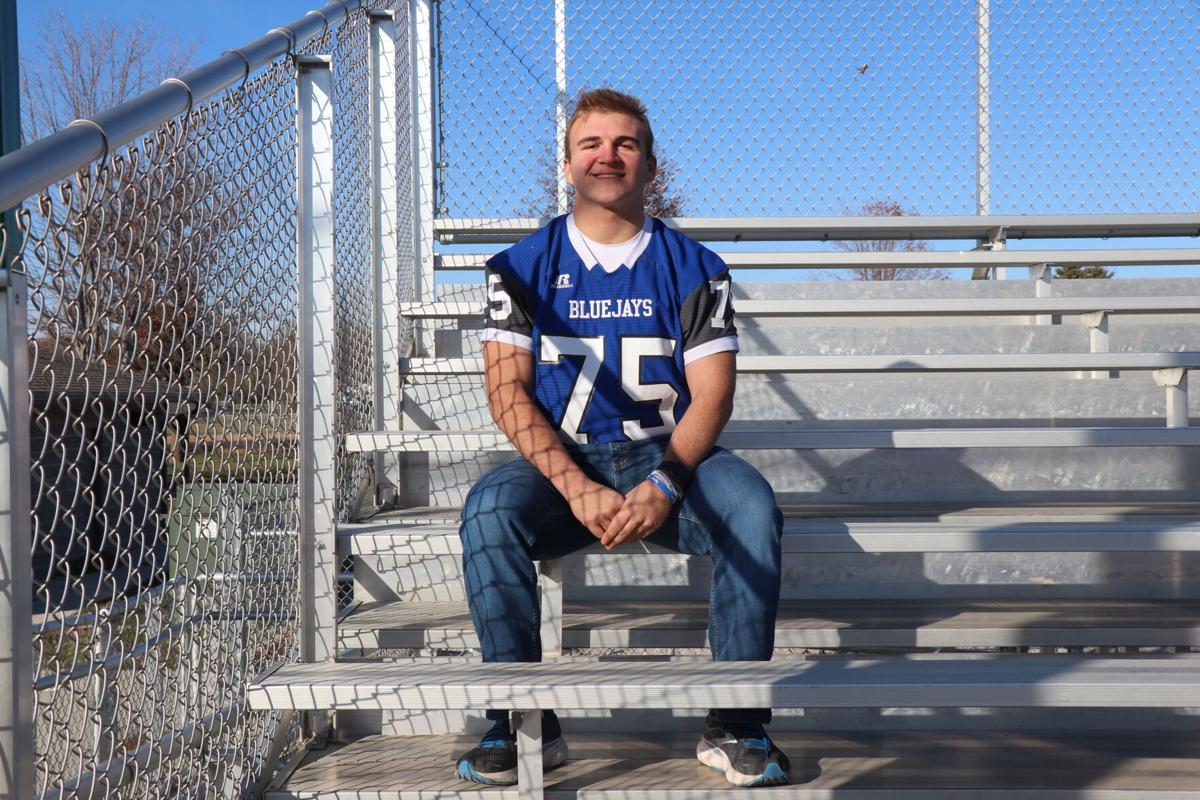 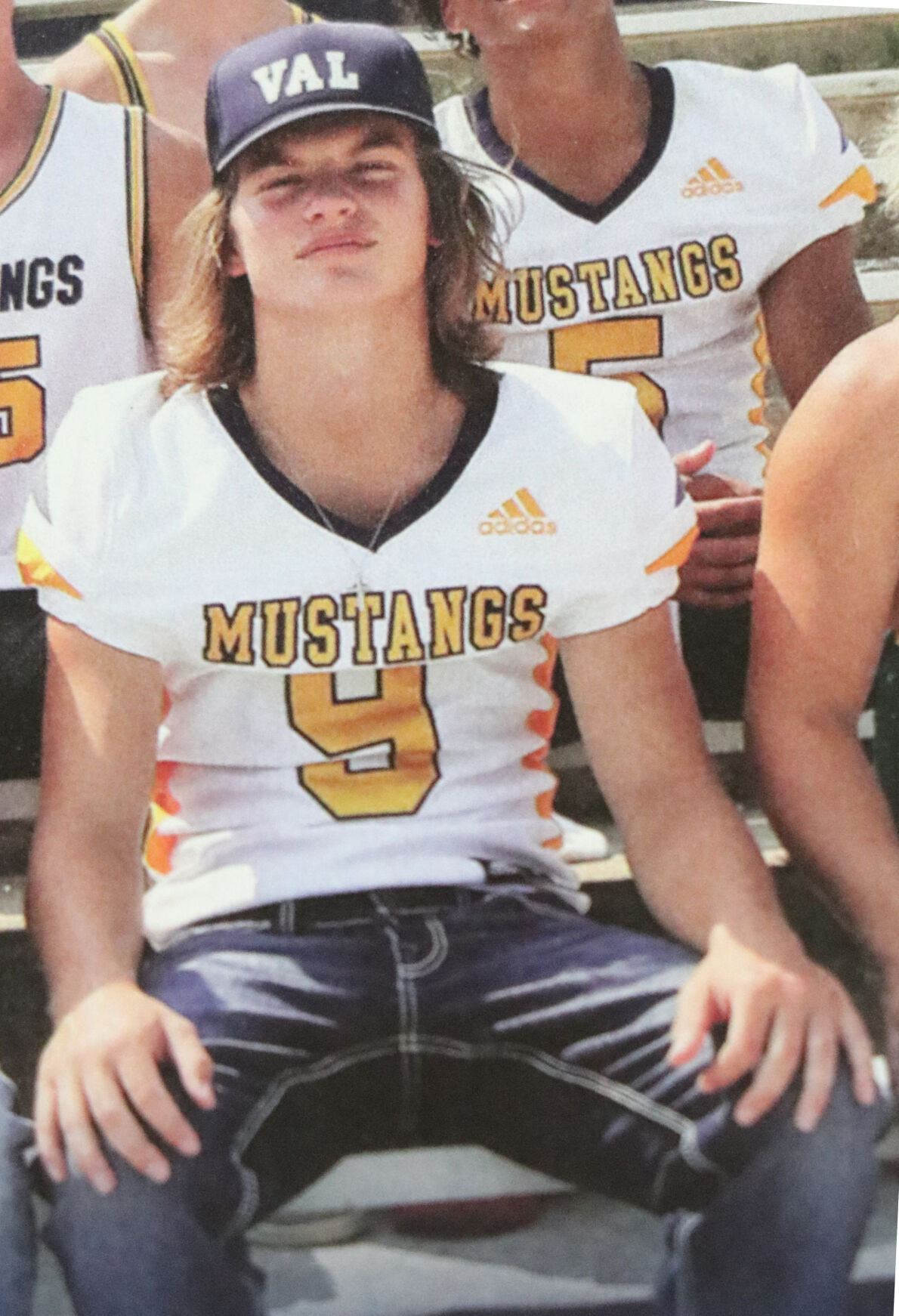 WAHOO- On the ground, through the air, nabbing a crucial touchdown catch, and sealing a key block; this year the first-team offense for the Wahoo Newspaper All-Area Team could do it all. For some of these players, they were the main or only source of offense for the teams, and all of them played crucial roles in their teams finding success on the field.

There are also a lot of first-time players on the offensive side of the ball for the First Team. In fact, there is only one player making their second appearance and that is Sam Petersen of Yutan.

There was a lot of hard work and dedication shown by these players as every player expect two, led their teams to playoffs. They all continued to progress and put their teams in positions to win games against the best in the state.

For that, all these players are deserving of these awards. Congratulations to the 12 players selected to the 2021 All-Area Offensive First Team in the Wahoo Newspaper.

Luke Carritt of Mead had a breakout season at the quarterback position for the Raiders in 2021. In an offense that is known for throwing the football, he thrived.

He had the most passing yards in the area with 1,741 yards. More impressive, is the fact that he threw 30 touchdown passes compared to only seven interceptions.

Running the ball, Luke Carritt picked up the third most yards on the team with 321 yards. He also led the team with seven rushing touchdowns.

His presence was also felt on the defensive side of the ball where he had 66 tackles and 33 solo tackles. He also came up with three interceptions and a 99-yard interception return for a score that was more like a 110-yard pick from the back of the endzone against Omaha Christian Academy.

In that victory, he had 205 passing yards and three touchdowns. He also rushed for 81 yards and a touchdown, with six tackles and one interception.

This season, Ethan Christensen was one of only two running back in the area to rush for over 1,000 yards on the ground.

Defensively he also compiled 67 tackles and had one quarterback hurry.

Ethan Christensen had two of his best offensive performances when his team needed him to step up the most, against quality opponents in the regular season. He had 111 rushing yards in a 30-13 throttling of Lincoln Lutheran and 191 yards gained on the ground in a 14-7 victory over Centennial.

The Ashland-Greenwood Bluejays were one of the top teams in Class C-1 throughout the 2021 season. One of the main reasons was their high-powered rushing attack led by junior Nathan Upton in the backfield.

Throughout the 2021 campaign, he gained 898 rushing yards on 171 attempts. This averaged out to 5.3 yards per carry and 11 touchdowns.

On defense, he had 36 tackles, one sack, and one interception as well.

Two of his best performances this last season were in victories against Arlington and Wayne. He had 141 rushing yards and two touchdowns against the Eagles and 117 yards and two scores vs the Blue Devils.

In the backfield, Wahoo has had a two-headed monster the past several years with Gavin Pokorny and Colin Ludvik. This season it was Pokorny who emerged as the primary back for the Warriors.

He had 804 rushing yards on 100 carries. He averaged eight yards a carry, with a long run of 45 yards, and eight touchdowns.

Through the air, he had 132 receiving yards and one touchdown catch.

Pokorny played well on the defensive side of the ball as well. He compiled 41 tackles and picked off three balls.

In Wahoo’s 24-13 upset of Auburn in the first round of the Class C-1 State Football Playoffs, Pokorny compiled some big stats. He had 66 rushing yards and a score and six tackles on defense.

The top receiver for Mead’s high-powered passing attack this year was their senior receiver, Tyler Pickworth. He had 89.4 receiving yards a game and a long catch of 75 yards.

This season he had the most receiving yards in the area with 894 yards. He also caught a team-leading 15 touchdown passes.

Defensively he had 33 tackles and five interceptions.

In that victory against Wynot to open the D2 Football Playoffs, Pickworth had five receptions for 128 yards. He also hauled in what turned out to be the game-winning touchdown for the Raiders vs the Blue Devils in a 26-20 win.

In Raymond Central’s 3-0 start to the year this past season, the main component to the team’s success was the Mustangs passing attack. Travis Nelson was the main cog in the receiving game in those victories.

For the season, he compiled 39 receptions and 591 receiving yards. Nelson averaged 66.67 receiving yards a game and six touchdowns with a long catch of 44 yards.

He also had 38 tackles and one interception on the defensive side of the football.

One of his best games of the year came in a 34-7 loss to Platteview. He had seven catches and 107 receiving yards

In an offense set up at Yutan, where they don’t usually throw the football, Sam Petersen of Yutan was able to find a nitch. He was once again a leading receiver for a Chieftains squad that won a District Championship and only lost one game in the regular season.

His 671 yards picked up on the season were the most for Yutan. He also had 67.1 yards per catch, a long catch of 35 yards, and nine touchdowns.

On defense, he had 34 tackles and 26 solo tackles.

In the last week of the regular season, when the Chieftains were trying to earn a district title against Centennial, Petersen had a great game in a hard-fought 14-7 victory. He was voted the player of the game by his team with 84 receiving yards and one touchdown.

This past season Cedar Bluffs struggled through a losing season that resulted in no wins. Throughout the tough year, the Wildcats had the one bright spot in Zephan Kluthe on the offensive side of the football.

He rushed for the second-most yards on the ground in the area with 1,185 yards. Kluthe averaged 169.3 rushing yards per game and had a long run of 53 yards.

Throughout the season he scored 17 rushing touchdowns and threw for four more.

In the team’s final home game of his career, Kluthe put together a spectacular performance against Mead. He had 187 rushing yards and scored all four touchdowns for Cedar Bluffs on the ground in a 62-27 loss.

Earning his first selection as an offensive lineman on the All-Area Team this season for Bishop Neumann is Cadin McGuigan. He helped power the Cavaliers to some big wins and the C-2 State Football Playoffs on the offensive line.

He helped create holes for the backs to gain 1,757 rushing yards on the ground and helped Conner Schutt and Ezra Vederal throw 1,448 yards through the air.

McGuigan was also a force on the defensive side of the ball as well. He had 43 tackles and picked up 1.5 sacks on the season.

Suring up the offensive line for a Bluejays squad who was rated No. 1 for most of the season was Braxton Buck. He was also the leader for one of the most feared offensive lines in Class C-1.

He was the main man in the middle for an offense that threw for 1,524 passing yards and rushed for 2,298 yards.

Defensively he caused havoc with 49 tackles. Buck also busted through the offensive line to get two sacks as well.

His selection on the Wahoo Newspaper All-Area First Team is thanks to his football coach Ryan Thompson. He stated he was the leader both verbally and with his play this season on that group blocking up front.

Carson Lavaley earned his first selection for the Wahoo Newspaper All-Area Team in the 2021 season. It was thanks to coach Chad Fox who stated he was the best offensive lineman for the Warriors.

He helped Wahoo throw for 814 yards and rush for 2,101 yards. This was thanks to his 6’1” 235-pound frame that helped him pull and open up holes and keep defenders in front of him.

Lavaley was also a terror on defense as well with 50 tackles. He got to the quarterback three times for three sacks.

In the team’s playoff win against Auburn, he helped the offense rush for 252 yards and pass for 82 yards. Defensively, he had five tackles and one sack.

For high school football team’s special teams and kicking is not always a sure thing. That was not the case for Ashland-Greenwood this past season thanks to the leg of Evan Shepard.

His best performance came in a 30-7 win over Platteview to end the regular season. In that game, he made three field goals with a long of 28 yards and three extra points.

Shepard was also one of the top receivers in the area with 718 receiving yards. He had eight touchdown catches as well.