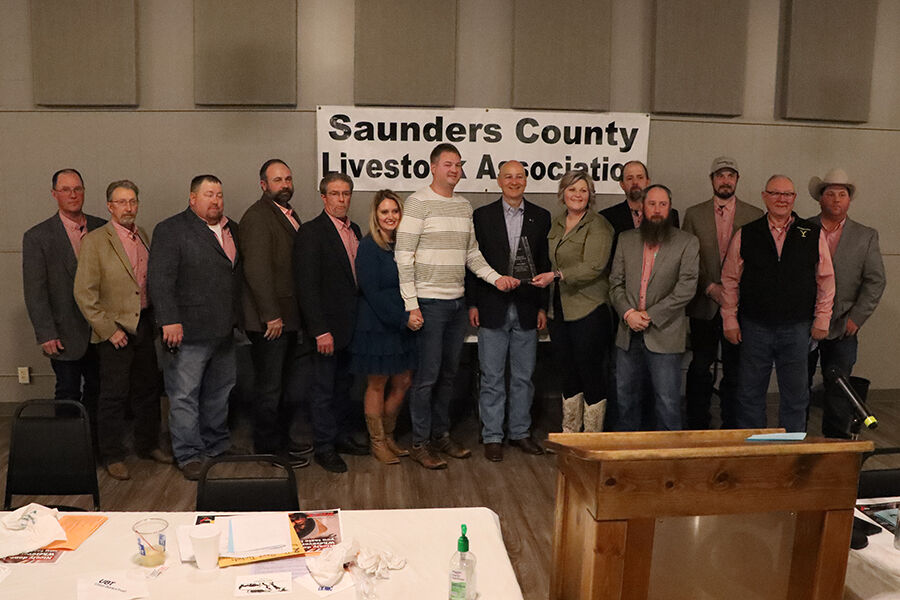 BANQUET: Nebraska Gov. Pete Ricketts (center) poses with Ryan and Wendy Mach, who accepted the Saunders County Livestock Association’s Special Recognition Award for their father, the late Larry Mach, during the association’s annual banquet on Saturday. Also pictured are members of the association’s board of directors. (Staff Photo by Suzi Nelson) 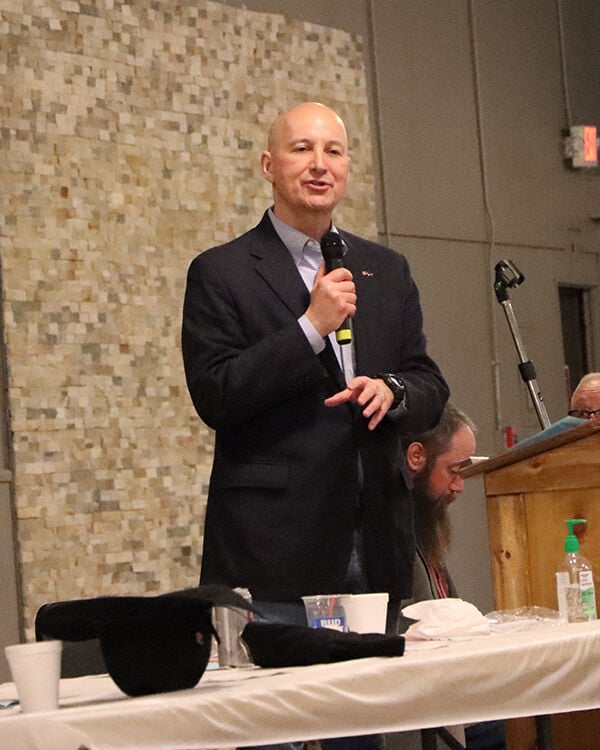 WAHOO – There were very few dry eyes in the room when the family of the late Larry Mach was presented the Special Recognition Award during the Saunders County Livestock Association banquet Saturday night.

Two of Mach’s children, Wendy and Ross Mach, accepted the award for their father, who was a legend in the local livestock industry.

Dan Kellner, president of the Saunders County Livestock Association (SCLA), presented the award to the Mach family. In his speech, he said that Mach had been a longtime member of the organization and had served on the board of directors and was a member of the Nebraska Cattlemen. He was known for his work with the Simmental breed of cattle. He was a member of the Blue River Gang, a co-op of five Nebraska Simmental breeders from Saunders, Butler and Seward counties that work together to create a 100-head herd of high-quality bulls and females sold during an annual sale.

Mach was also noted for his work as the representative for District 5 on the Saunders County Board of Supervisors and his military service and volunteer efforts for the American Legion, on the local and state levels.

Gov. Pete Ricketts attended the annual event, which was not held last year because of the COVID-19 pandemic. Ricketts is a regular at these dinners, and noted that the SCLA board worked with the local health department in order to put on the banquet.

Ricketts updated the crowd on Nebraska’s efforts to address the pandemic. He said the state developed a seven-pillar plan. The plan began with an effort to test Nebraskans by launching the Test Nebraska website.

“The first step was identifying people who have the virus so we can ask them to stay home,” Ricketts said.

The state then worked on contact tracing, the method by which exposure to the virus is tracked between patients. The governor’s office also focused on making sure there was enough personal protective equipment (PPE) such as N-95 masks for health care providers.

The state also set up a plan to provide accommodations for health care workers, law enforcement and first responders so they would not have to expose their families to the coronavirus. Dormitories and hotel rooms were set aside.

“We have had about 500 Nebraskans take advantage of this,” Ricketts said.

Early on in the pandemic it was apparent that certain areas of the population were more at risk for COVID-19, like the elderly and meat processing plant employees, Ricketts said. Plans were developed test to these individuals and lessen exposure.

The governor’s office developed Directed Health Measures (DHM) that restricted public gatherings, required social distancing and mandated other procedures. The levels fluctuated depending on the severity of the virus, reaching levels of close to near lockdown at times when the positivity and hospitalization rates were soaring.

Hospital occupancy was one of the main factors in determining the DHM levels Ricketts said. Keeping hospitals from being overwhelmed was the goal. Currently only 4% of hospital beds in Nebraska are occupied by COVID-19 patients.

“As of today, we’ve got about 170 people in the hospital with coronavirus,” he said.

The final pillar in the plan is vaccination, which is starting to ramp up in Nebraska, Ricketts said.

The vaccine is delivered to local health departments based on population, according to the governor. Residents and employees of long term care facilities and people working in the public safety field were among the first to receive the vaccine. The bulk of the vaccine is being administered to persons over the age of 65, who are most at risk for severe reaction to the coronavirus or death, he added.

Vaccination is the key to stopping COVID-19, Ricketts said.

“Ultimately, delivering the vaccine is how we work ourselves out of the pandemic,” he added.

Ricketts said the fact that Nebraskans are not under a lot of restrictions now has helped the state survive the pandemic by allowing people to continue to live their lives as normally as possible and has contributed to the fact that the state has the lowest unemployment rate in the nation.

“It’s because of that I think we benefit,” he said.

The state is also using more than $400 million provided by the CARES Act to benefit small businesses, nonprofits and even the livestock industry, which received $110 million, the governor said.

“We’re in a great position to grow our state,” he added.

“That is significant,” he added.

The governor is working on more tax relief measures in the current legislative session. He wants to increase the state’s cash reserve to trigger additional tax relief, and asked Sen. Lou Ann Linehan to introduce LR22CA, a constitutional amendment to allow the public to vote to limit property taxes.

All of these measures are to fight the increasing property taxes in Nebraska, which have risen at least 2 to 4% each year for the past 10 years, Ricketts said.

“That means property taxes are going up faster than people’s income or inflation,” he added.

Ricketts concluded by saying it’s been a tough year for everyone, but there’s light at the end of the tunnel.

Kellner said attendance was down because of the pandemic, but he was still pleased. There were about 300 guests. The event normally draws as many as 550, he said.

“We still had a great turnout for what we had,” he said.

LINCOLN – Three Wahoo residents were arrested on drug charges in the parking lot of a north Lincoln Walmart on April 6.

WAHOO – Sorry St. Wenceslaus parents, your kids will be home a whole week early for summer vacation. But, silver linings and all, at least it’…

WAVERLY – Lila Dee Coleman, 8, of Waverly, was crowned and awarded the state title of Miss Nebraska Superstar in the Princess of America pageant.

WAVERLY – When Harrison Martindale graduated from Waverly High School in May 2019, he left with an interest in the stock market and instilled …

YUTAN – The vocal majority attending a town hall meeting last week about a proposed solar farm were not in favor of the privately-owned venture.

RAYMOND – Like most people who go through Raymond Central School District, Sydnie Blanchard and Grace Mueller have known each other since kind…

VALPARAISO – Valparaiso Village Board Member Mike Blazek had 20 days to respond to the recall petition he was served on March 9.

BANQUET: Nebraska Gov. Pete Ricketts (center) poses with Ryan and Wendy Mach, who accepted the Saunders County Livestock Association’s Special Recognition Award for their father, the late Larry Mach, during the association’s annual banquet on Saturday. Also pictured are members of the association’s board of directors. (Staff Photo by Suzi Nelson)