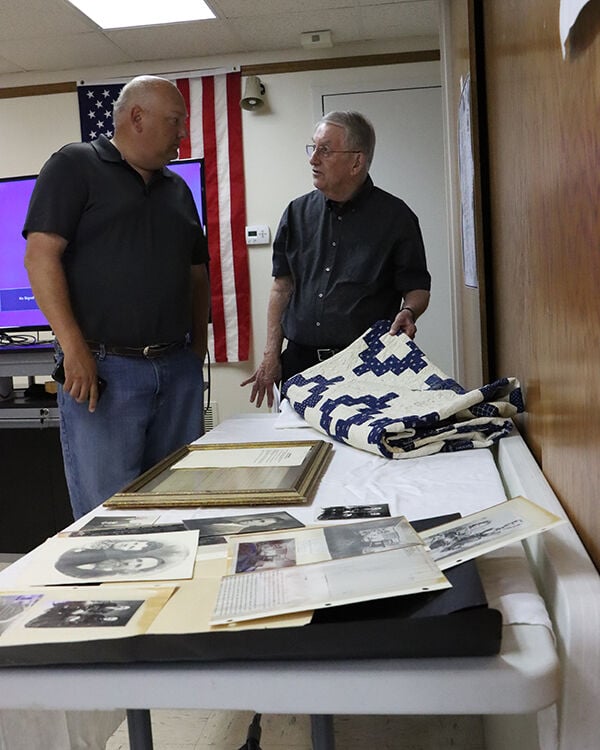 FOUNDING FAMILY: Bob Lee, great-grandson of one of Wahoo’s founders, speaks to an audience member during the Lunch and Listen event at Saunders County Museum in Wahoo last Thursday. The event was part of the Wahoo 150+1 celebration. (Staff Photos by Suzi Nelson) 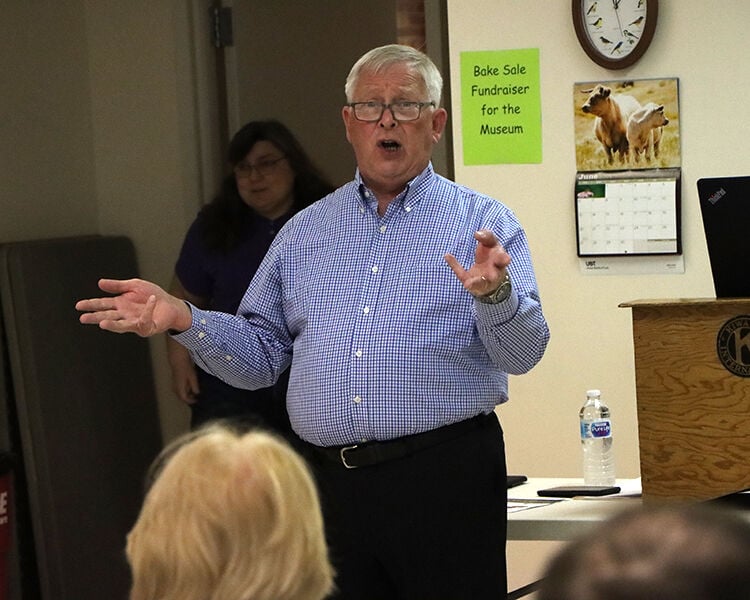 WAHOO – Descendants of one of the founding families of Wahoo visited the Saunders County Museum in Wahoo last week to share memories and mementoes of their family with the public as the Wahoo 150 celebration got underway.

The museum held its first in-person Lunch and Listen event in a year with Bob Lee, a descendent of John Lee, as a guest speaker. The event also included a presentation about Wahoo’s history by Kevin Whitcomb.

Although Moses Stocking was the first settler in the area that was to become Wahoo, John Lee and his brothers arrived four years later in 1869.

“When we’re talking about a city it’s kind of hard to say that one individual was the person who was responsible entirely for the founding of the city, but certainly in this case, the Lee family, all three members, James, John and William were heavily involved in the settling,” said Whitcomb.

Whitcomb said Stocking was a farmer, while the Lee brothers were entrepreneurs who established several businesses in the area.

“And so, we have almost two opposite extremes. We have the farmers who are assembling the area and they’re developing the basic element of the economy here, farming. And we have the entrepreneurs who are supplying the needs that these individuals eventually require, whether or not it’s general goods or implements, or whether it’s the ability to be able to sell their grain,” Whitcomb said.

John Lee, two of his brothers and three other local partners purchased land in Wahoo from David Miller for $100 in 1868. One year later, John and James Lee opened a general merchandise dry goods store, the first business in Wahoo. James Lee built the first home in Wahoo and later became the city’s first postmaster.

In 1870, the Wahoo Town Association was formed with members that included John, James and William Lee.

“This organization became the proprietors for the town,” Whitcomb said.

A township was formed that was named for the brothers.

“The township was named at this point, unsurprisingly, Leesville,” said Whitcomb.

The village of Wahoo was not incorporated until 1874. Whitcomb acknowledged that it is difficult to determine the exact year of Wahoo’s founding, but because the Wahoo Town Association was organized in 1870, that has been the date that has been designated as the “founding year.”

The name Leesville was later changed to Wahoo, but originally spelled “Wauhoo” until an unknown entity, possible the post office, changed it to the spelling used today, Whitcomb said.

Bob Lee’s great-grandfather, John Lee, moved from the Wahoo area to Valentine in the early 1880s, where he homesteaded and formed a town called Brownlee. He later moved to Washington state, where he passed away. He is buried at the cemetery in Wahoo that his family founded.

Bob Lee said John Lee also worked as a missionary with the Pawnee tribe. He lived in Ponca for a few years and operated a general store there, where he also got to know the local Native Americans.

“He stayed there for about three years,” said Bob Lee. “He learned sign language and became very good friends with the Ponca tribe.”

One of the family artifacts that Bob Lee brought to the presentation was a quilt made in 1889 by family members. In excellent condition, the quilt has panels that mention the Lee family, including one panel that says, “Mr. John R. Lee, missionary to the Indians.”

Before leaving Wahoo to establish his ranch near Valentine, John Lee was a major landowner in eastern Nebraska. Bob Lee said his great-grandfather at one point in the 1880s owned 1,000 acres of land in Saunders County, 640 acres in Douglas and Dodge counties and 100 lots in Wahoo, along with several buildings.

Suzi Nelson is the managing editor of the Wahoo Newspaper. Reach her via email at suzi.nelson@wahoonewspaper.com.

FOUNDING FAMILY: Bob Lee, great-grandson of one of Wahoo’s founders, speaks to an audience member during the Lunch and Listen event at Saunders County Museum in Wahoo last Thursday. The event was part of the Wahoo 150+1 celebration. (Staff Photos by Suzi Nelson)