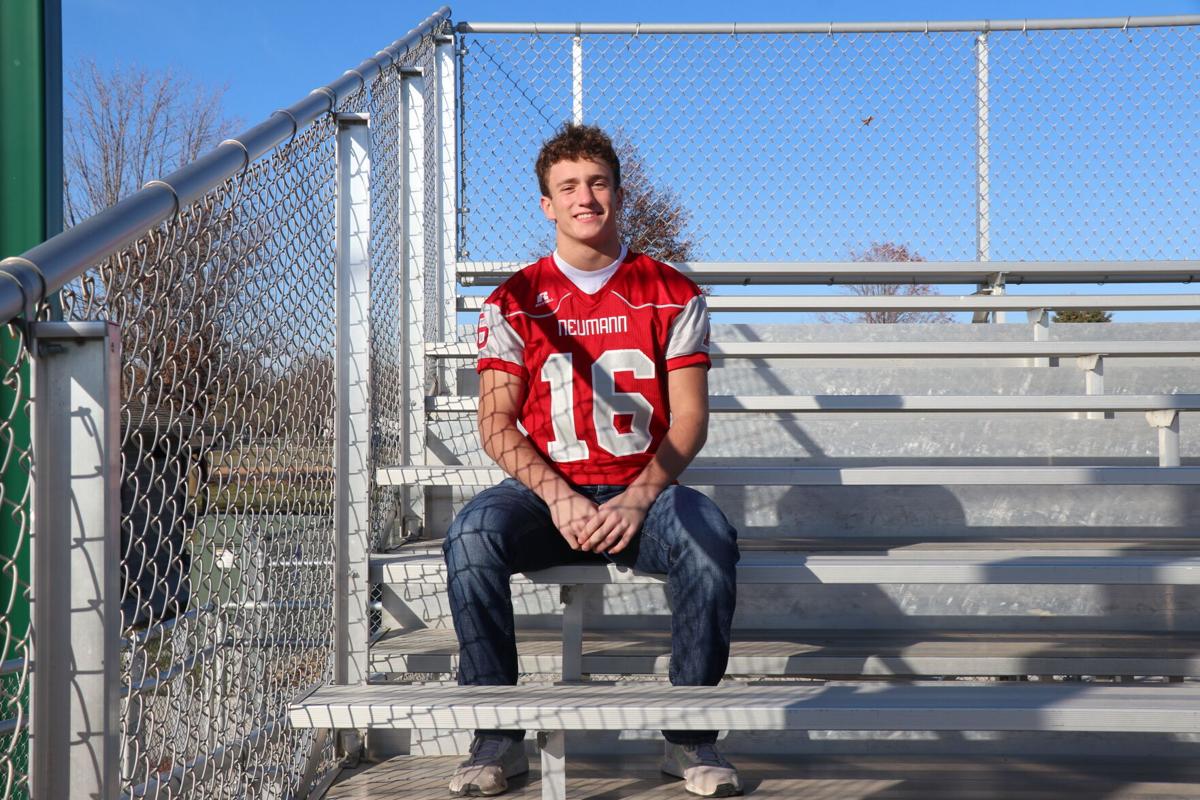 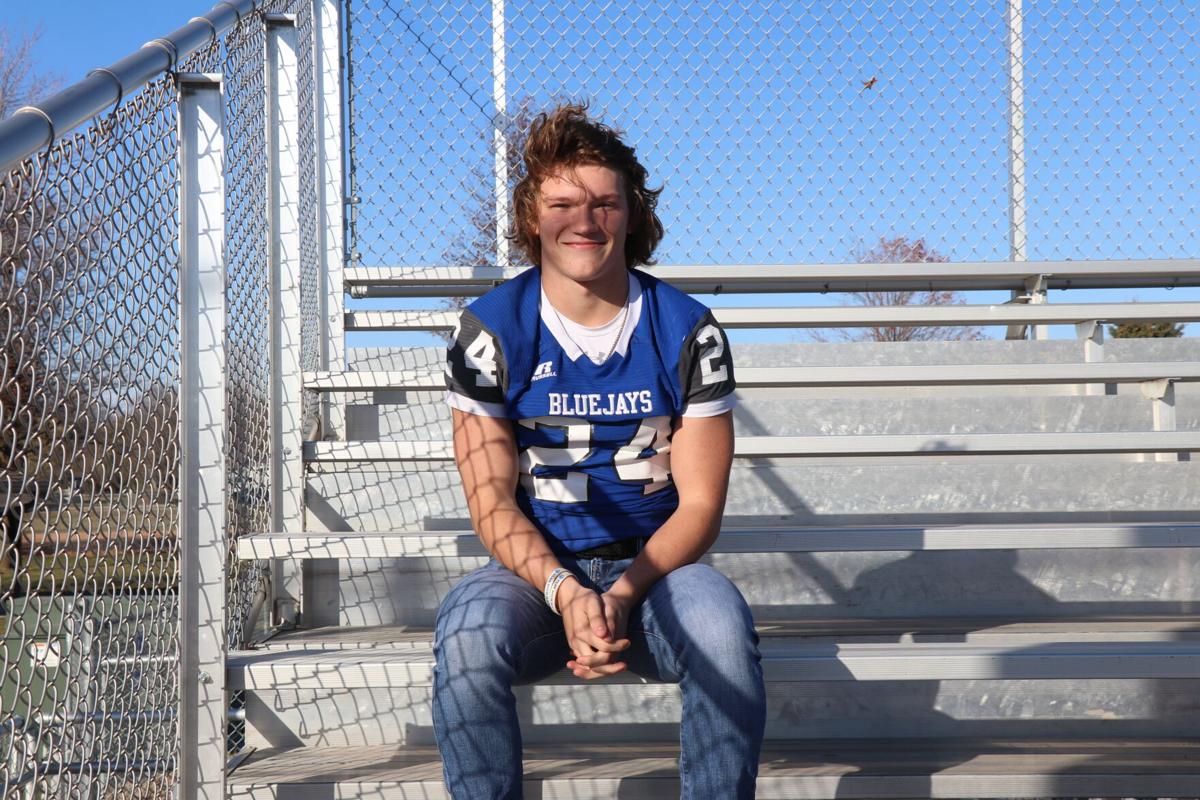 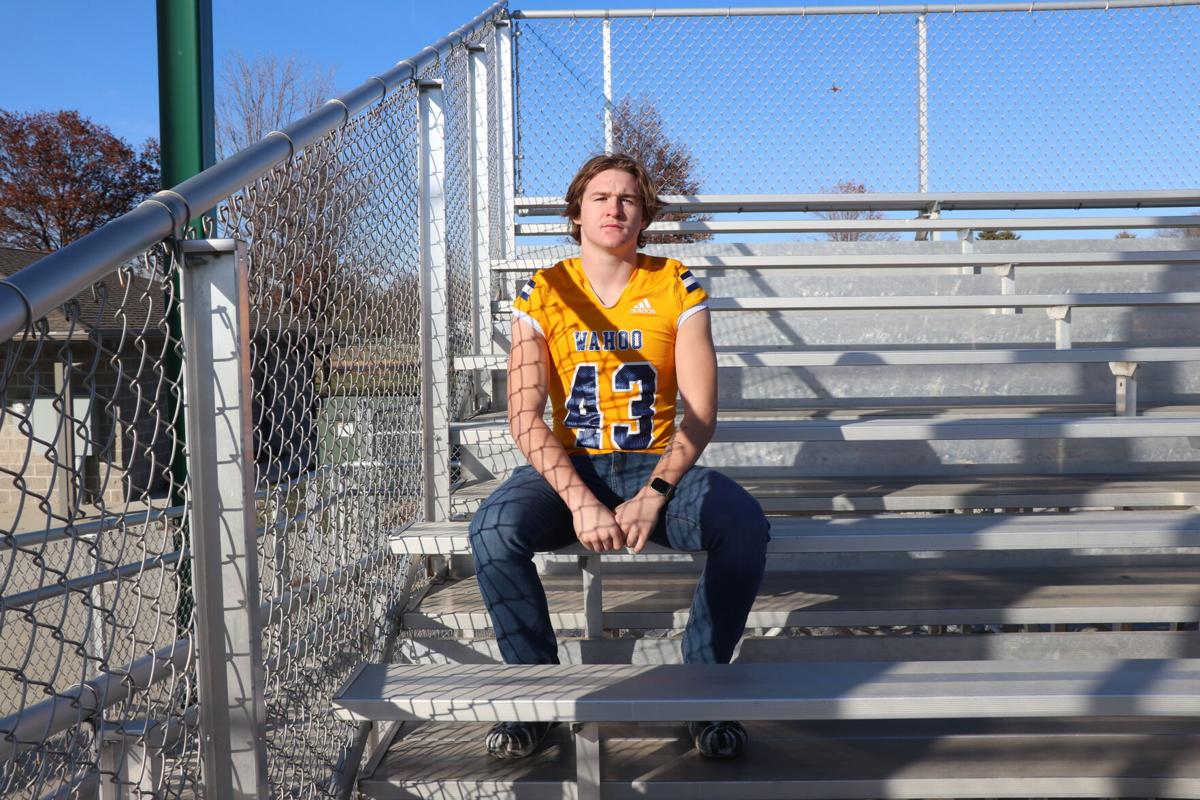 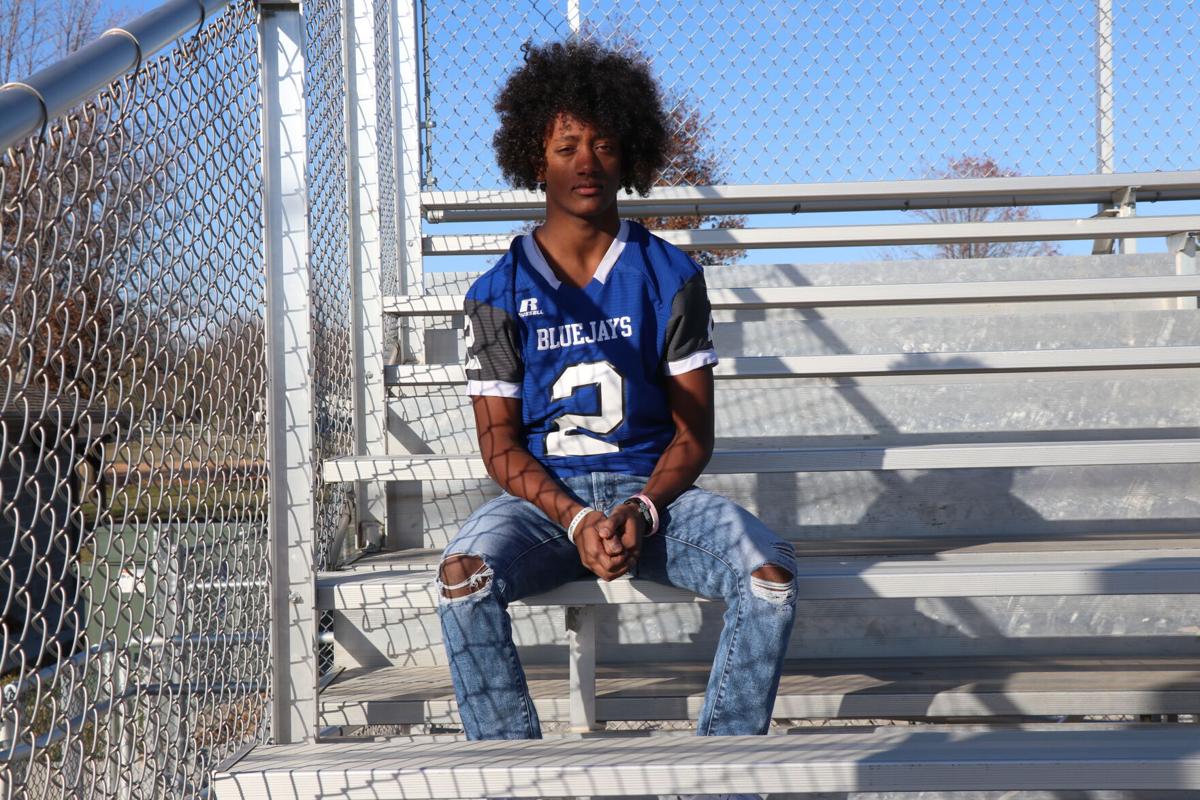 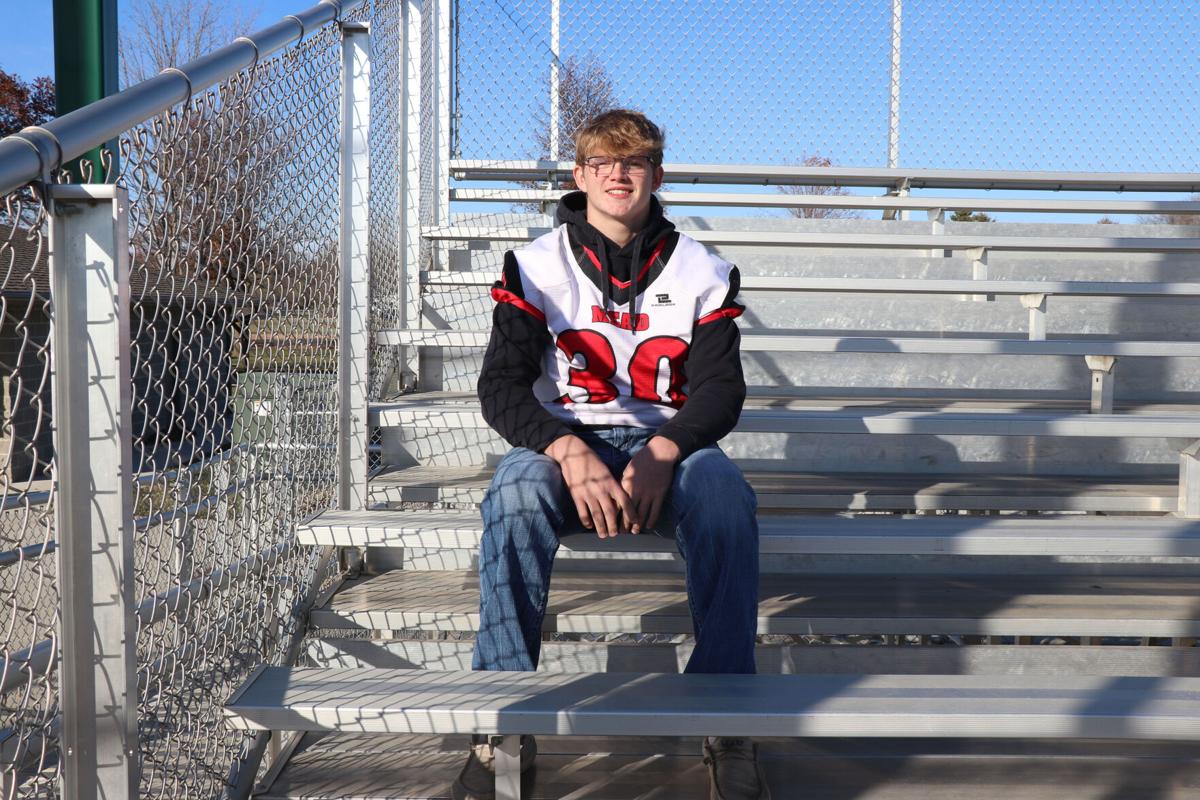 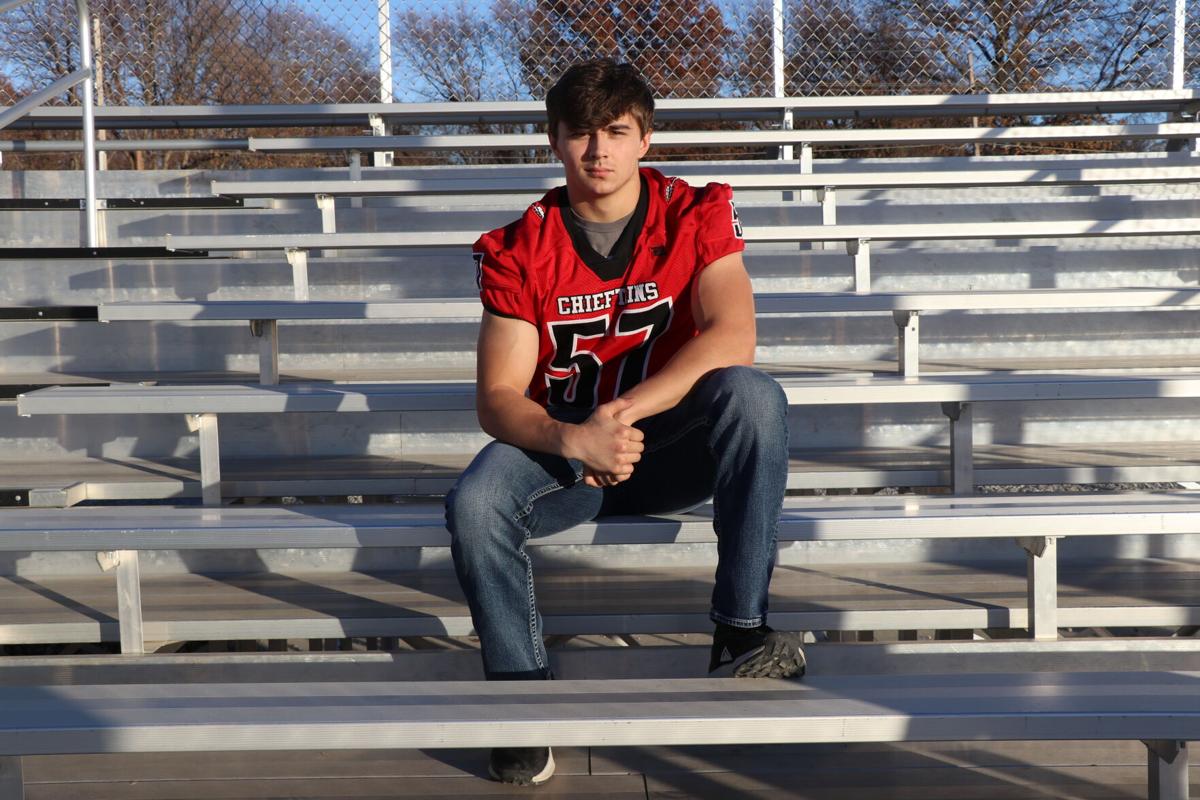 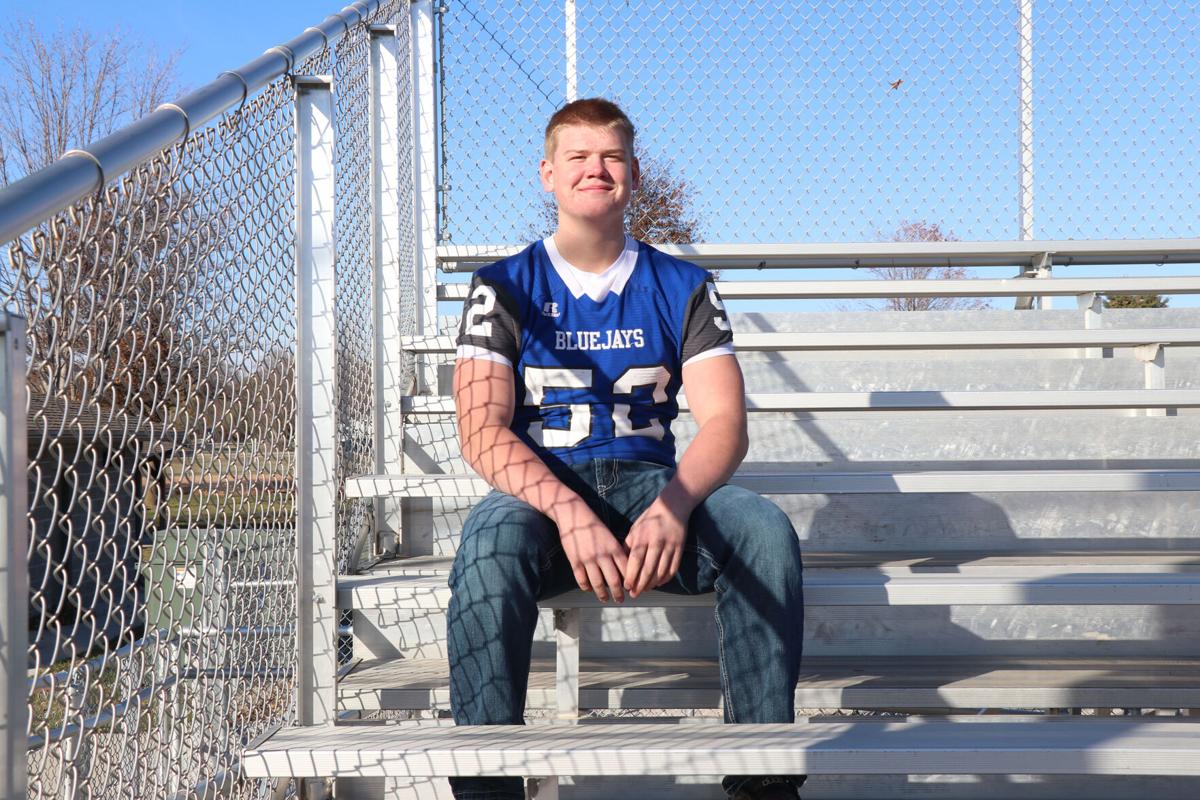 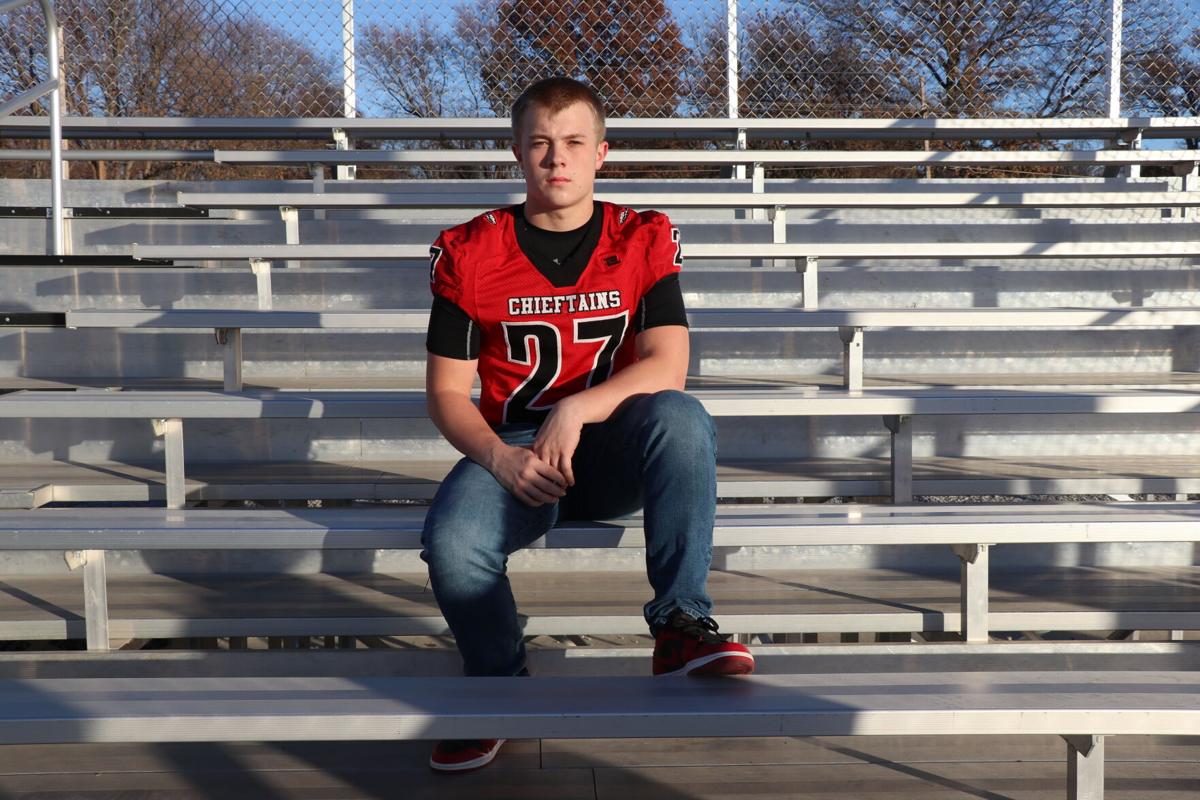 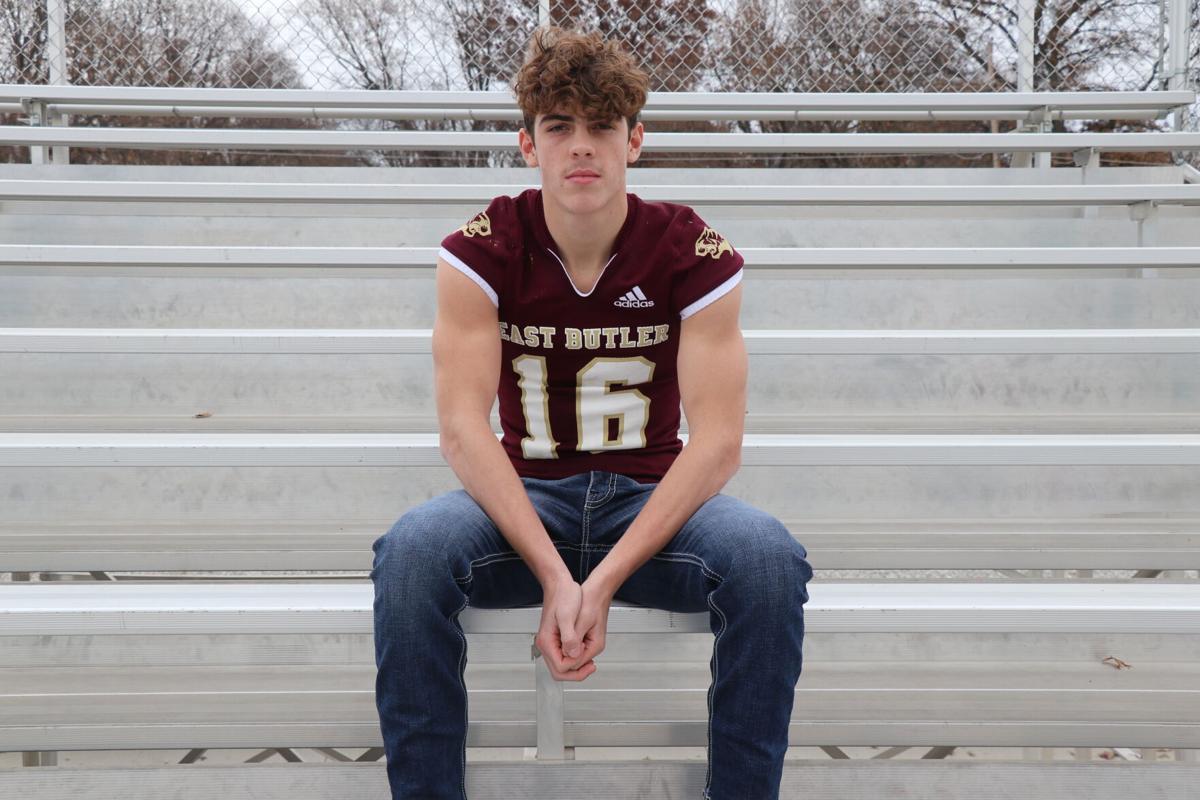 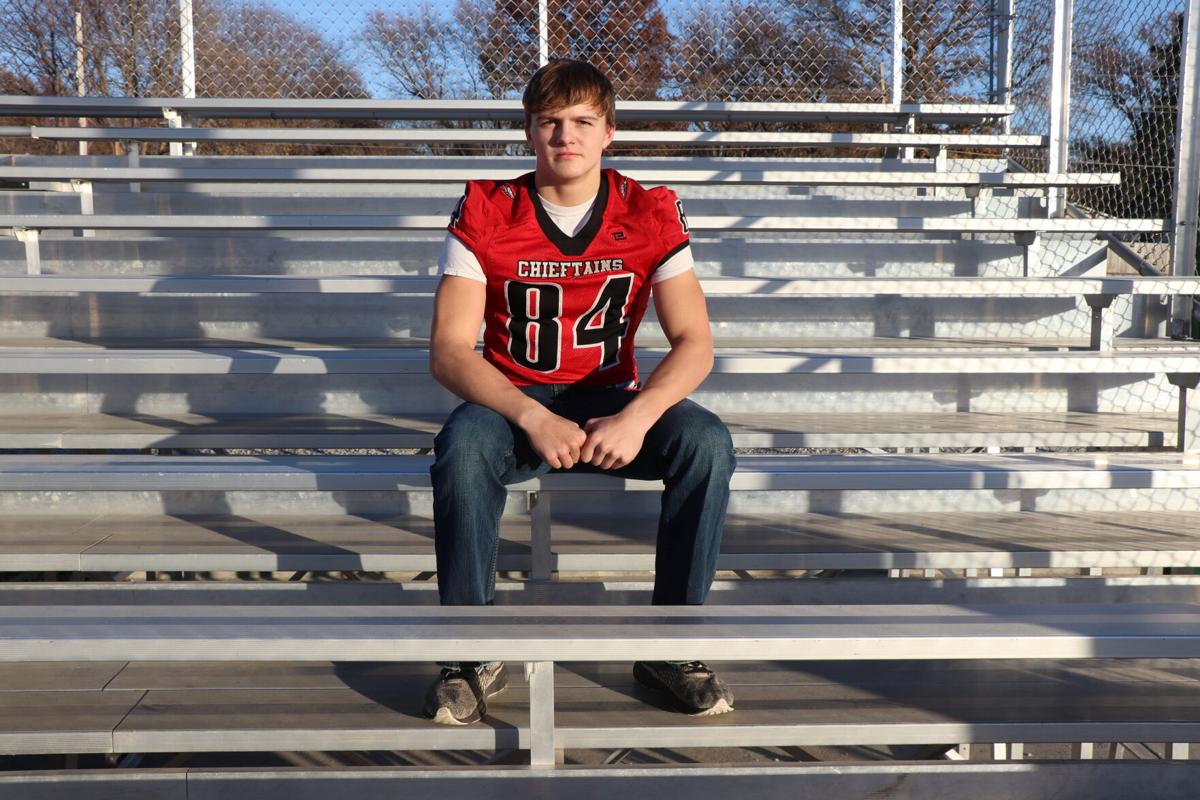 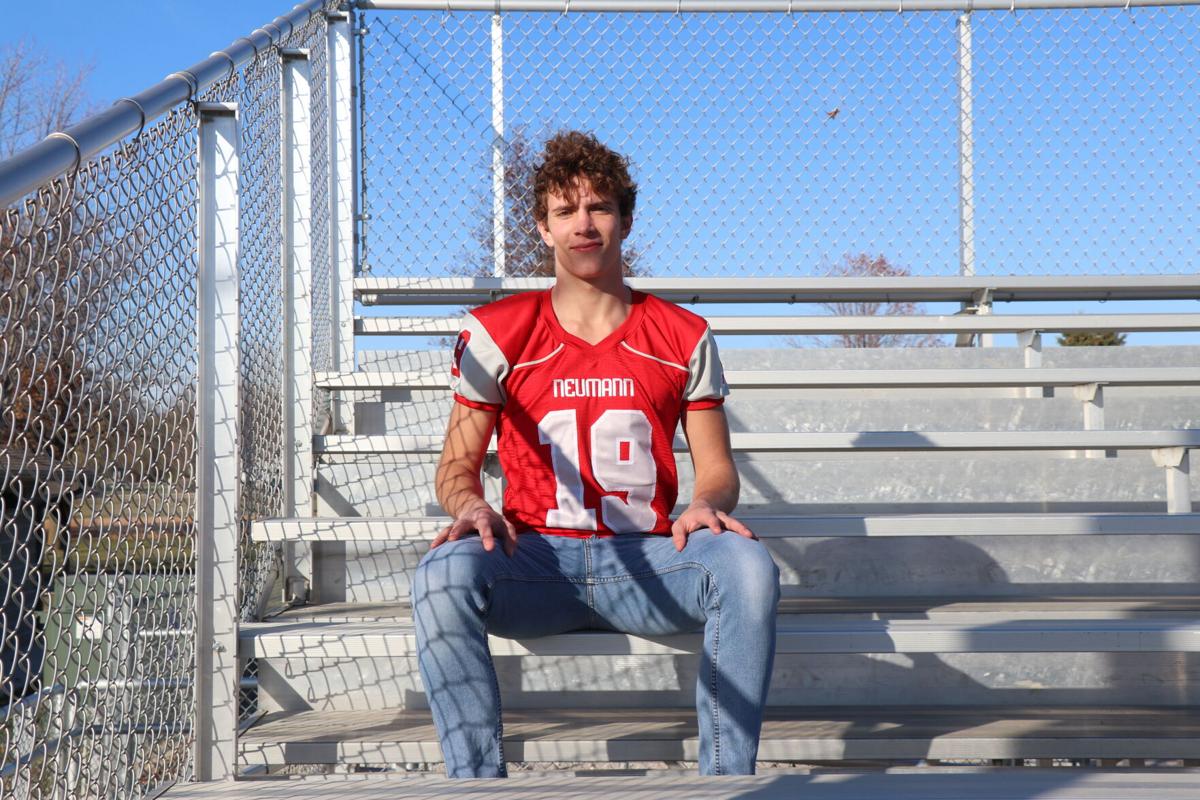 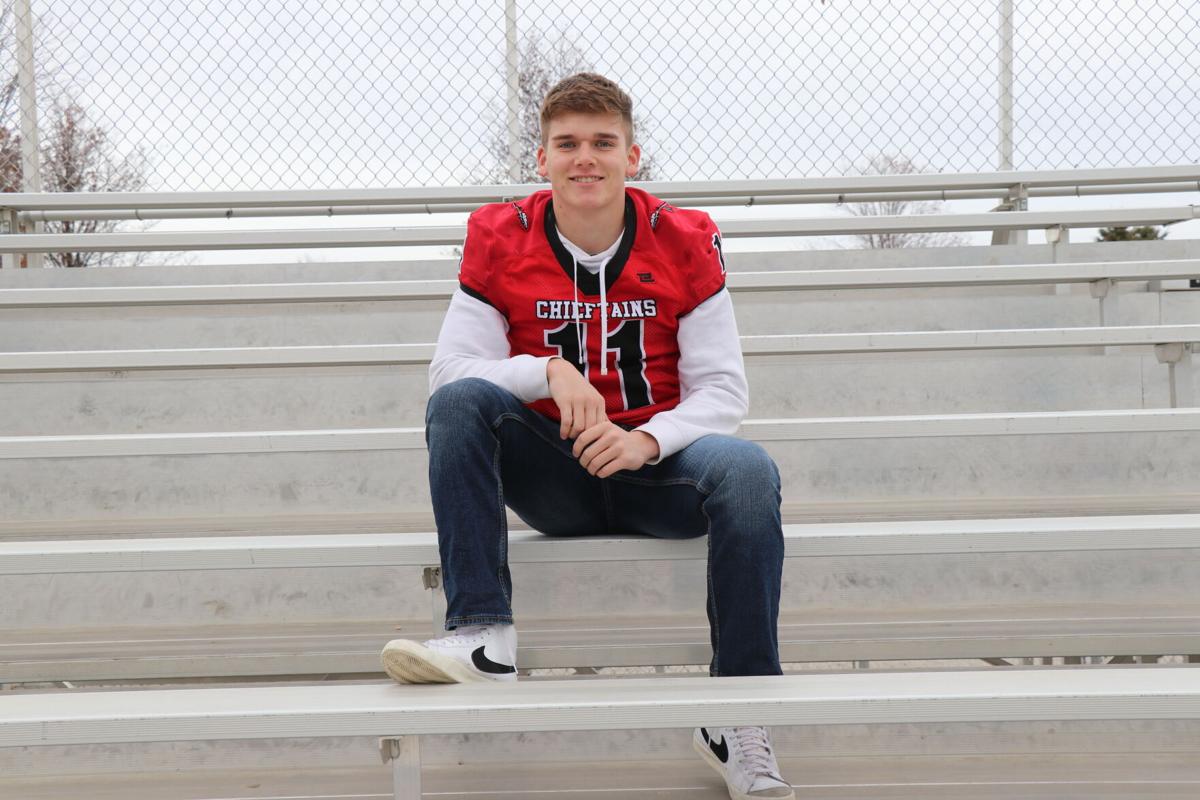 WAHOO- Every football coach knows the key to a good football team is having a strong defense. That was the centerpiece to many of the area team’s success on the gridiron this past season.

Four of the eight teams in the area were able to hold their opponents to under 20 points a game on average. They included Wahoo, Ashland-Greenwood, Bishop Neumann, and Yutan.

In total, ten out of the 12 players selected for the first team came from these schools. There is also a good mixture of upperclassmen and underclassmen that will continue the strong tradition on defense for years to come in the area.

Here is a look at the 2021 First Team Defense for the Wahoo Newspaper.

Luke Lambert was the second leading tackler for a feared Ashland-Greenwood defense this past season. He is the type of player who can do a little bit of everything on the defensive side of the football.

His 70 tackles were the second most recorded by the Bluejays this season. He also had five sacks which were the most recorded in the area and three more than any other player on Ashland-Greenwood’s team.

In the Bluejays 21-12 home playoff victory over Adams Central, Lambert played a crucial role. He led the team with nine tackles and also came up with a crucial sack.

Ashland-Greenwood will be happy to have Lambert back for one more season. Look for him to continue to be a leader for the Bluejays in the trenches.

In his senior season, Josh Jessen of Yutan was able to make his first Wahoo Newspaper All-Area Team for football. He was the main component of a Chieftain defense that only gave up 173 points this season, which was the second fewest.

He tied for third on the team with Ethan Christensen with 67 tackles this year. On top of all those tackles, he also had two sacks which was the second most for Yutan.

One of Jessen’s better games came against a Lincoln Lutheran squad who made the second round of the C-2 playoffs. He picked up eight tackles and also had a sack as well.

Wacker was another spectacular defender for the Chieftains top-notch defense. He was a part of a two-headed monster on the defensive line with Jessen.

The sophomore finished second on the team with 68 tackles and four for a loss. He also led the defense with four sacks and caused one fumble.

In the team’s touchdown victory over Wilber-Clatonia in the regular season at home, Wacker made his presence felt in multiple different ways on defense. He had five tackles and earned one sack against the Wolverines.

The top defender for the Wahoo Football team this last season was none other than Curtis Swahn. He was able to accomplish this from his outside linebacker position.

He had the most tackles for the Warriors with 59 and eight tackles for a loss. Swahn tied for the lead in the area with five sacks and also had one interception.

In Wahoo’s 24-13 victory over Auburn in the first round of the Class C-1 State Football Playoffs, Swahn was locked in. He led the Warriors with five tackles and a sack that resulted in a loss of five yards for the Warriors.

For the second time in as many years, Trenton Barry of Bishop Neumann finds himself on the All-Area First Team defense after another spectacular season for the Cavaliers. He seemed to have a knack for finding the football and was in the middle of everything happening on defense.

Barry earned the second most tackles in the area with 94 tackles or 9.4 tackles per game. He also snuck into the backfield and picked up one sack.

On top of having a great season on defense, he was also Neumann’s top receiver. He caught 27 balls for 544 yards and three touchdowns.

One of his better defensive performances on the season came in a thrilling 23-21 victory over Centennial at home in the regular season. He finished with over ten tackles with 13 and one of them was for a loss.

The top defender for a dominant defense for Ashland-Greenwood this past season was Logan Sobota. The junior was the team’s top tackler while showing up in other defensive categories as well.

He was third in the area with 84 tackles, 8.4 tackles a game, and five tackles for a loss. Sobota also earned one interception and one sack.

In the team’s one-point victory over Auburn in week one, Sobota got off to a great start, which set up his amazing season on defense. He led the team with eight tackles and had an interception of the Bulldogs on the goal line.

This was Sobota’s second time making the All-Area Team on the defense side of the football. With one more year left of high school, the Bluejays will be more than happy to have him back anchoring their defense.

The title of top tackler in the area goes to Beau LaCroix of Mead after being the only player in the area to reach triple digits. He also earned multiple sacks as well.

After not playing on the defensive side of the ball last season, he jumped into a starting position at linebacker for the Raiders this season and recorded 128 tackles and 12 tackles for a loss.

LaCroix was the team’s leading rusher on offense with 474 rushing yards. He also picked up three rushing touchdowns.

In the team’s playoff win over Wynot, he compiled 11 tackles. LaCroix also led the team with 81 rushing yards and tacked on 17 receiving yards.

Despite not having the success they would have liked on the field, Trevin Brecka was one of the lone bright spots for the East Butler football team. He was the team’s leader on both the defensive and offensive sides of the football.

Brecka was second on the Tigers squad with 65 tackles and 9.3 tackles a game. Half of those tackles were solo tackles with 32.

This was Brecka’s third time making the All-Area Football Team in a row.

Few players have wreaked havoc on opposing offenses like Daniell has throughout his four years on the Yutan Football Team. The defensive back for the Chieftains used his athletic ability to come up with the most interceptions in the area.

He had ten interceptions and averaged 17.3 yards a return on those interceptions. In the tackle category, he had 57 and one tackle for a loss.

On offense, he was the second leading receiver with 140 yards. Daniell also hauled in two touchdown catches.

His best game of the year was in a record setting performance against Bancroft-Rosalie-Lyons-Decatur at home. He tied the state record with five interceptions in the victory and 114 yards after the catch, with one of them, returned for a score.

Finishing with a spectacular season on both the defensive and offensive side of the ball for Bishop Neumann was Silas Mongar. He was a main contributor for the Cavaliers both as a defensive back and a running back.

Mongar ended up second on the team in terms of tackles with 53 for the season with five of them being tackles for a loss. He was the team leader with three sacks and also stepped in front of one pass.

Running the football, he gained 811 yards on the ground. He had a long run of 94 yards and found the endzone six different times.

In the team’s 35-6 win at home that got them into the playoffs, Mongar came up with four tackles and had two sacks. He also had 92 rushing yards on 16 attempts and two touchdowns.

The only freshman making the All-Area Football Team this year was Thomas Spears of Ashland-Greenwood at defensive back. He was a great boost for the Bluejays who were one of the most dominant defensive groups in all of Class C-1.

Spears was third on the team with 68 tackles and averaged 6.2 tackles per game. He was also second in the interception category with five of them and caused one fumble.

In Ashland-Greenwoods win over Saunders County foe Raymond Central at home, Spears came up with a big pick that resulted in 44 more yards after the catch. He also had three tackles and 38 return yards.

Breaking through as one of the best tacklers in the area during his junior season was Zack Krajicek of Yutan.

He paced the Chieftains with 89 tackles on the year and 8.9 tackles per contest. On top of that, he also got in the backfield one time this year and sacked the quarterback.

You could also see Krajicek on the offensive side of the football as well, where he was used as a running back. He gained 235 yards on 38 carries with four touchdowns.

In the team’s miraculous 19-14 win on the road at Bishop Neumann, Krajicek came up big when his team needed him the most. Trailing by one, he blocked a punt that set up a game winning touchdown a few plays later.