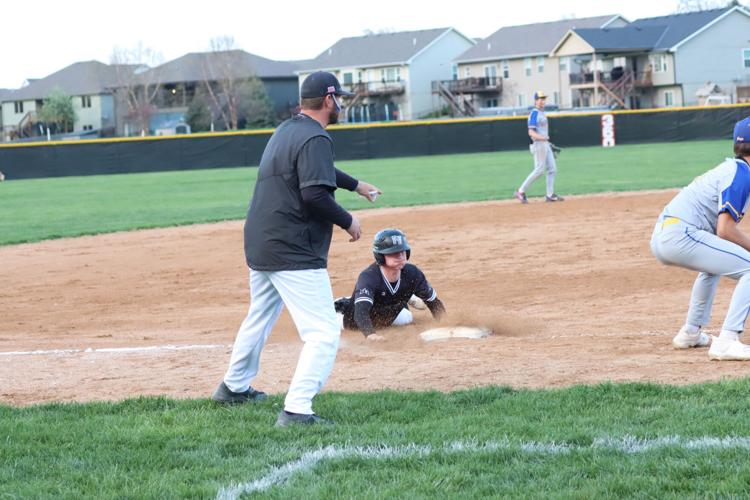 Levi Kennedy of Platte Valley sliding into third safely against Seward in the District Final on May 6 in Yutan. 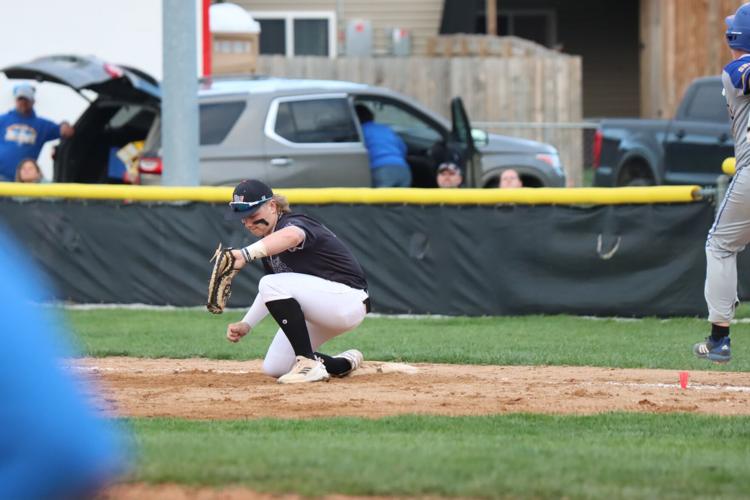 Maxwell Bendler making a catch against Seward in the District Tournament held in Yutan on May 6. 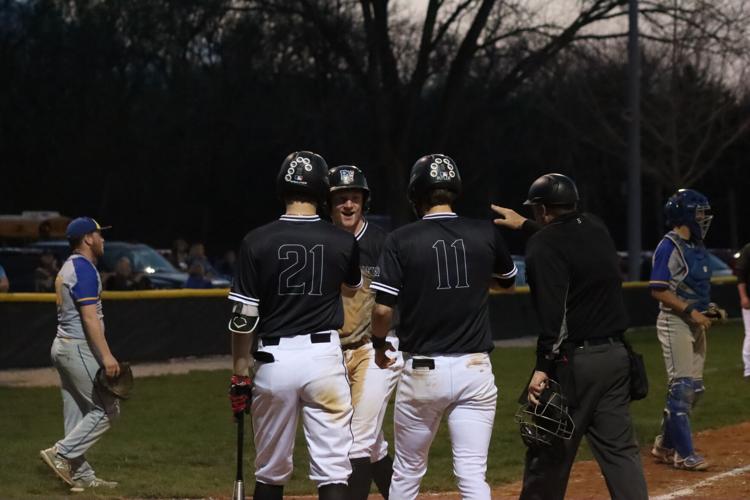 Levi Kennedy of Platte Valley being congratulated after scoring against Seward in the District Tournament on May 6. 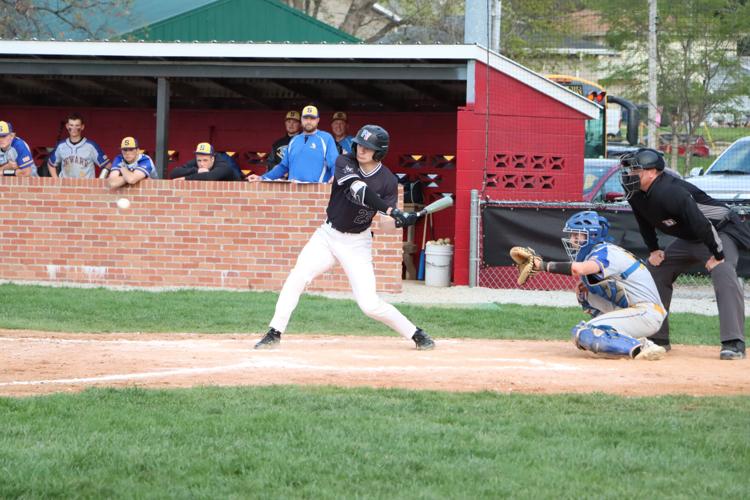 Sam Petersen of Platte Valley looking to pick up a hit against Seward in the District Tournament in Yutan on May 6. 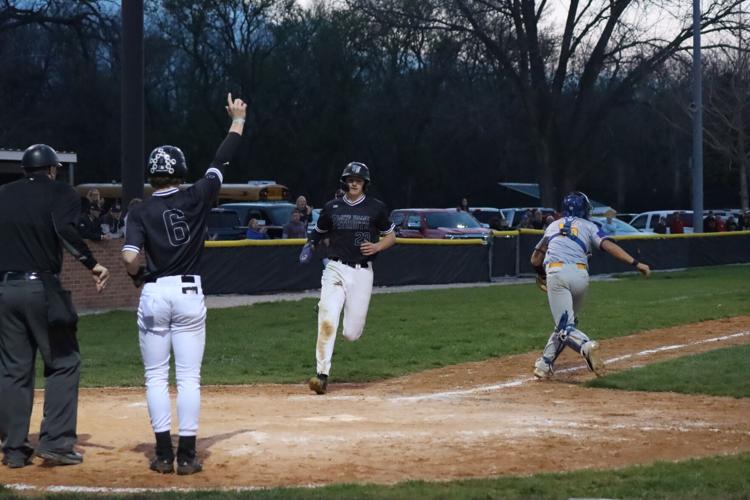 Sam Petersen of Yutan scoring against Seward in the District Tournament on May 6.

YUTAN- The Class B No. 8 Platte Valley Patriots saw their season come to an end in the B-6 District Tournament at Jack Anderson Ballpark in Ashland on May 7. They finished the tournament with a 1-1 record, defeating Seward 5-4 on May 6 in Yutan and then losing to defending Class B State Champion Beatrice 6-1 on April 7.

In the first round, the top seeded Patriots were matched up with Seward. The Bluejays got to the semifinals by knocking off Ralston earlier on Friday by a score of 5-4.

Early on, it was Seward who tried to throw Platte Valley off their groove with two runs in the top of the first as they took a 2-0 lead.

The Patriots put themselves in a position to score in the bottom of the second with two runners on via walks with two outs. Hitting a single to right field was Maxwell Bendler scoring Jacob Butler and making it a 2-1 contest in favor of Seward.

A single to center by Timmy Hunt drove in two more runs and gave Platte Valley the lead at 3-2.

The score remained the same until the bottom of the fifth. It was in that turn at-bat that the Patriots were able to string together 10 runs to run-rule the Bluejays.

An error on a hit by Hayden Lewis and a walk of Carter Washburn gave the Patriots two baserunners. A single by Sam Petersen to right field scored one and made it a 4-2 contest.

Two batters later, two runs were driven in by Braxton Wentworth on a fly ball to left field and then Levi Kennedy singled to left scoring two more and making it an 8-2 advantage for Platte Valley.

Bendler continued to stay hot in the contest, with another hit, this time a double to center driving in two and giving the Patriots 10 runs.

After an intentional walk by Seward, an error at shortstop allowed Aidan Washburn to score. With one out, Petersen flew out to center scoring Lewis to end the game.

Driving in three runs with two hits in the contest was Bendler. Coming up with one hit and two RBIs were Petersen, Wentworth, Kennedy, and Hunt.

Pitching 4.1 innings with two earned runs given up and six strikeouts was Kennedy. Nick Carroll came on for 0.2 innings in relief and gave up no runs.

That win moved Platte Valley onto the District Finals where they took on Beatrice. The game started off well for the Patriots with one run in the top of the first.

Lewis the first batter of the game reached safely on an error made at shortstop on his grounder. Platte Valley made the Orangemen pay for that mistake, with Lewis coming around to score on a double to right field by Petersen.

The score remained that way until the bottom of the fourth when Beatrice reached base on an error and a single. A double and then a sac fly drove in two runs for the Orangemen giving them the lead.

They were able to add on two more insurance runs in the bottom of the sixth.

The Patriots didn’t go away quietly in their turn at bat in the seventh. With two outs they were able to get two runners on, but couldn’t capitalize.

Coming through with the only two hits of the contest with one RBI was Petersen. Hunt pitched five innings, gave up one earned run, and had two strikeouts, while Cade Bridges went one inning and had one strikeout.

Platte Valley had a fine year finishing at 18-6 and setting team records for wins in a season, team batting average at .342, and team Earned Run Average of 2.44.

Pre-K-2 building on track to move-in before '23

LINCOLN – Expanding broadband to rural Nebraska, especially District 23, has been one of the priorities for State Sen. Bruce Bostelman.

ASHLAND – For 167 days of his life, Clay Anderson floated far above the Earth.

Citizens sound off at hearing for AltEn discharge permit request

MEAD – Laura Steele moved to Wahoo to be at arm’s length from the urban buzz of Omaha.

ASHLAND – After a two-year absence, the Ashland Farmers Market will again be a part of summer Saturday mornings in downtown Ashland.

WAHOO – Chris Lichtenberg has advanced to the General Election in the race for Saunders County Sheriff, topping the other Republican candidate…

ASHLAND – Jim Anderson and Amanda Roe will advance to the General Election in November in the race for Ashland mayor, according to unofficial …

Hometown Heroes come in all forms in 2022

Levi Kennedy of Platte Valley sliding into third safely against Seward in the District Final on May 6 in Yutan.

Maxwell Bendler making a catch against Seward in the District Tournament held in Yutan on May 6.

Levi Kennedy of Platte Valley being congratulated after scoring against Seward in the District Tournament on May 6.

Sam Petersen of Platte Valley looking to pick up a hit against Seward in the District Tournament in Yutan on May 6.

Sam Petersen of Yutan scoring against Seward in the District Tournament on May 6.