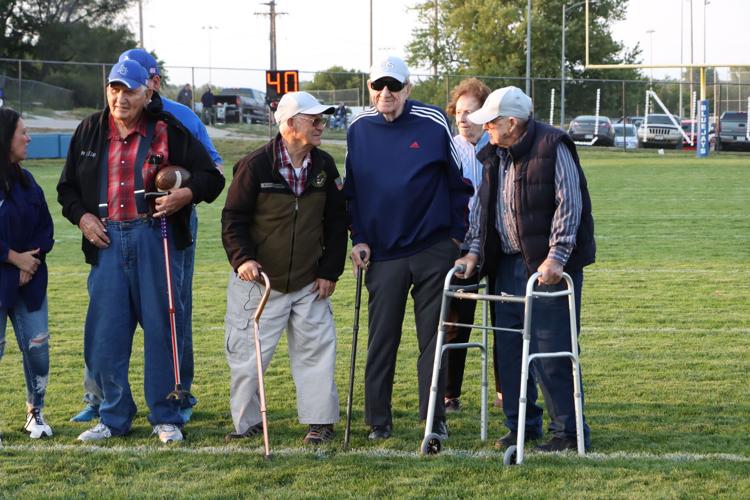 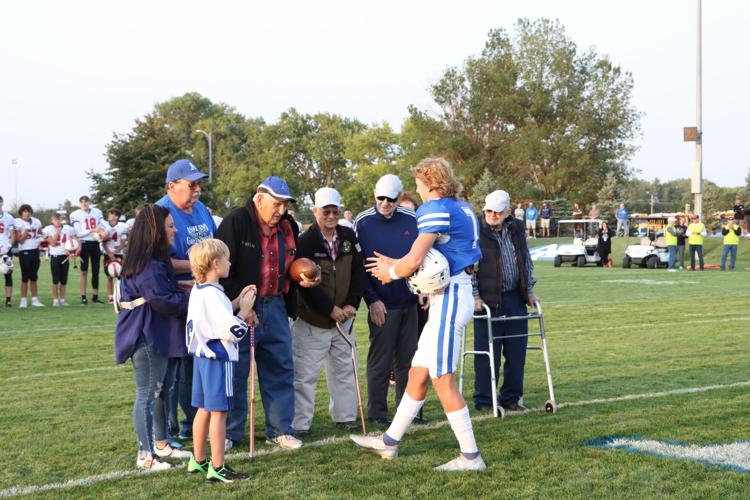 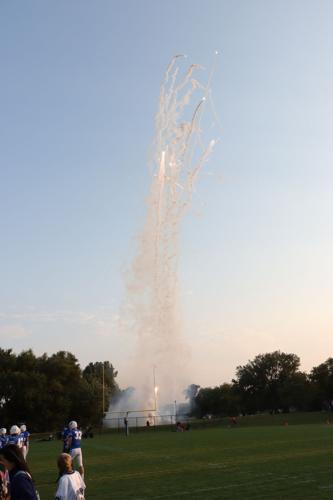 LIGHT THE SKY: Fireworks light up the sky over Ashland's Memorial Stadium, part of the pre-game ceremony marking the 75th anniversary of the building of the stadium by volunteers. (Staff Photo by Suzi Nelson)

ASHLAND – The four men reflected on their days at Ashland’s Memorial Stadium as they waited for the celebration honoring the 75th anniversary of the sporting venue to begin.

“It was built to last,” said Tom Deleski Sr., who was a member of the first football team to play in Memorial Stadium in 1947.

Deleski should know how it was built. He and other members of the football team lent a hand to the volunteer project, rolling wheelbarrows of concrete from the hopper to the forms, or hauling lumber around the project.

Lloyd Castner wasn’t old enough to be on the football team, but he also contributed to the project, working side-by-side with his father, Clarence Castner.

“My dad and I often came together,” Castner said. “It was nice to come here with dad.”

The elder Castner was the treasurer of the project, which saw 158 volunteers work for just over two months to get the stadium ready for the 1947 football season.

Lloyd Castner was 12 years old when the stadium was built. His job was to throw shovels of sand or gravel into the hopper.

“You had to count your throws,” he recalled. That was to keep track of how much sand was going into the concrete mix, he explained.

Even though he was just a kid, Castner understood the significance of the project.

“I was amazed that all this volunteer work would get the job done,” he said.

In June 1946, the idea was proposed to build a new football stadium in honor of the men and women of the Ashland area who had served in World War I and World War II. It took nearly a year for approval to be obtained from the Civilian Production Administration (CPA). Salt Creek overflowed its banks twice in the summer of 1947, causing even more delays.

Work finally began in August 1947. The volunteers worked at night and on the weekends to carve the concrete stadium out of a hillside below what was then the only school building in town.

The stadium was built with donations of more than $2,500 as well as materials, tools and equipment. The final price tag was $4,000, about half of what it would have cost if they had hired a contractor. When it was done, the World War Memorial Association of Ashland deeded the facility to the school district.

The donations and hard work were honored on Friday night with a short ceremony before the Ashland-Greenwood football game. Deleski and Castner were joined by two other members of the 1947 football team – Dick Buckmaster and Melvin Bundy.

The players’ photos were on a display that included a program from the 1947 football season and the blueprints of the stadium, which was signed by the volunteers.

The four men were announced to cheers from the crowded stadium, which was full of fans ready to see Ashland-Greenwood take on top-ranked Aurora. They waved and smiled as their names were read.

Deleski handed quarterback Dane Jacobsen the game ball and they made their way off the field as fireworks were launched just to the south of the stadium.

As the football game got ready to start, Buckmaster and Bundy thought about their days as Bluejays. Both men said the field was dirt when they played the 1947 season.

“It was all dirt to start with,” Bundy said.

The field’s configuration was changed from east/west to north/south when the stadium was built, they said.

Both had good memories of games at Memorial Stadium, including wins over Wahoo.

“I can’t think of a better team to beat,” Buckmaster said.”

The four men were proud to be a part of the anniversary celebration.

When asked if they were surprised that the stadium had held up after 75 years, Castner summed it up best.

Suzi Nelson is the managing editor of The Ashland Gazette. Reach her via email at suzi.nelson@ashland-gazette.com.

LIGHT THE SKY: Fireworks light up the sky over Ashland's Memorial Stadium, part of the pre-game ceremony marking the 75th anniversary of the building of the stadium by volunteers. (Staff Photo by Suzi Nelson)