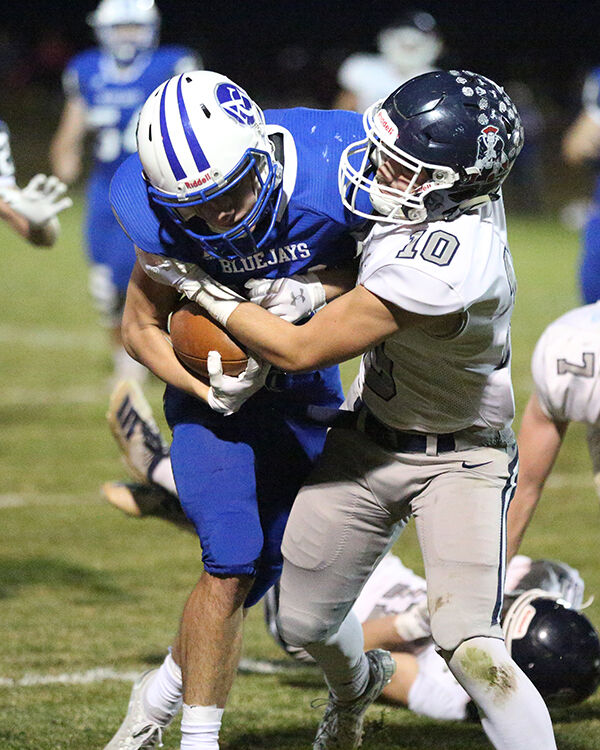 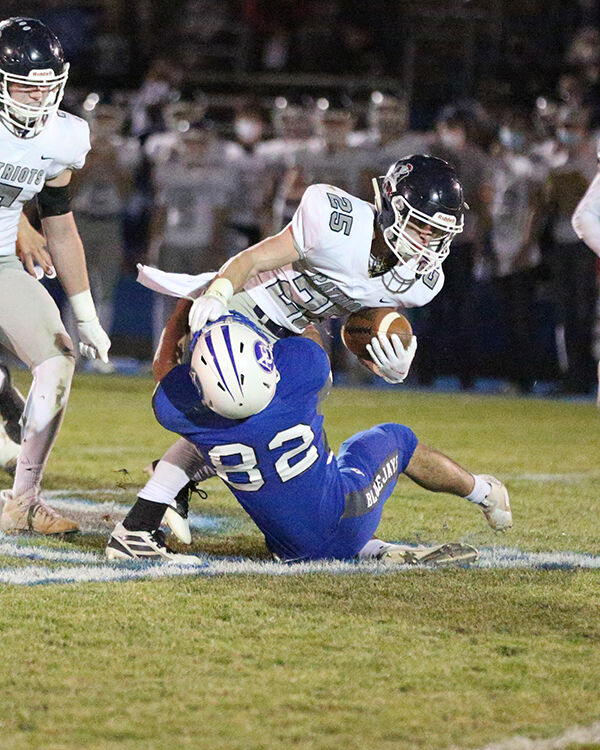 TAKE DOWN: Mason Fortney tackles a Patriot running back in the backfield during Friday night’s game. The loss ended the Bluejays’ season with a 10-1 record.(Staff Photo by Jason Unger)

ASHLAND – The third-ranked undefeated Ashland-Greenwood Bluejays were dealt their first loss of the season at home on Friday night in the quarterfinals of the Class C-1 state football playoffs.

The sixth-ranked Adams Central Patriots took advantage of a key third quarter Bluejay miscue and never looked back while notching the big win.

Leading 7-6 at the half, The Patriots took the opening drive of the second half 80 yards in five plays capping it with a 14-yard touchdown run from senior quarterback Cam Foster. The extra point gave the visitors at 14-6 lead.

The Patriot defense forced a Bluejay punt on the ensuing possession and an errant snap over Bluejay punter Nick Carroll’s head set up the Patriots at the Jay 30-yard line.

Six plays later the Patriots added another touchdown and the Jays never recovered.

The other story of the game was the Bluejays’ difficulty in the red zone.

AGHS had the ball four times inside the Patriot 20-yard line, but managed just six points.

“Their guys kind of made their plays and we didn’t,” Ashland-Greenwood coach Ryan Thompson said. “We knew they were talented and had enough playmakers everywhere.”

The game got off to a great start for the home team.

The Jays possessed the ball for more than 10 minutes in and despite a scoreless first quarter, the Jays looked like the crisper team.

A 58-yard punt by Carroll pinned the Patriots deep in their own territory late in the first half.

Adams Central running back Oaklyn Smith broke four tackles on his way to scoring on an 82-yard run. The PAT gave the Patriots a 7-6 lead at the half.

The final two touchdowns of the game were scored on TD passes from Foster to wide receiver Tyler Slechta.

Slechta was a thorn in the Jays side all night, finishing with 151 yards receiving and an interception on defense.

The Bluejays finished with 342 yards of total offense, but allowed a season-high 446 to the Patriots.

Senior running back Matthew Schuster rushed for 138 yards on 22 carries to lead the Jay rushing game.

Jacobsen completed 13-of-19 through the air for 135 yards and a touchdown and added 53 yards on 10 carries in the run game.

Senior speedster Lane Zimmerman was bottled up all night by the Patriot defense. Zimmerman was held to 53 yards receiving on a team-high six catches. Teammate Evan Shepard caught three balls for 53 yards.

Jacobsen and Sobota combined for 19 tackles to lead the defense.

Shepard forced and recovered a fumble.

“One game will never define our program and this team accomplished a lot together this year,” said Thompson.

Throughout the weekend, Thompson and his crew began compiling statistics and

records for the season, posting the information on social media.

The 2020 Bluejay team won the district championship for the fourth time and experienced the school’s fourth undefeated regular season. It was also the sixth time in the last eight years that Ashland-Greenwood made it to the quarterfinals of the state playoffs, and only the second time in school history that the team was seeded first in the brackets.

TAKE DOWN: Mason Fortney tackles a Patriot running back in the backfield during Friday night’s game. The loss ended the Bluejays’ season with a 10-1 record.(Staff Photo by Jason Unger)