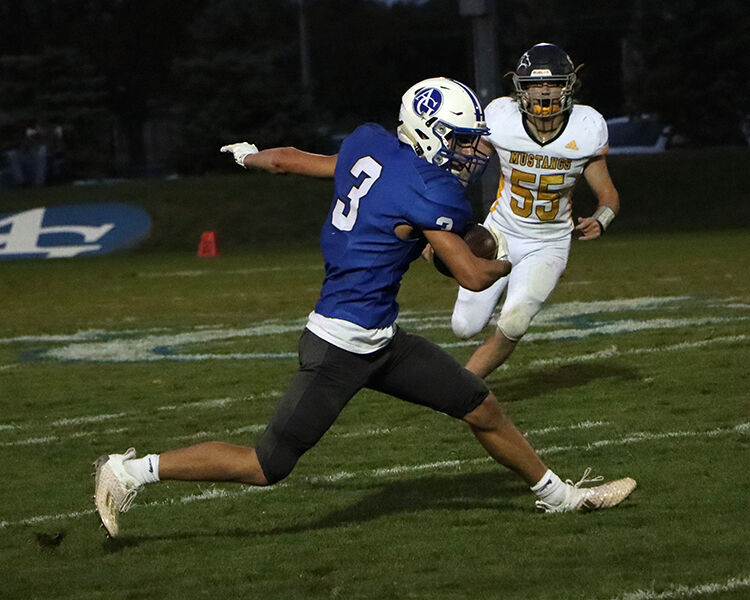 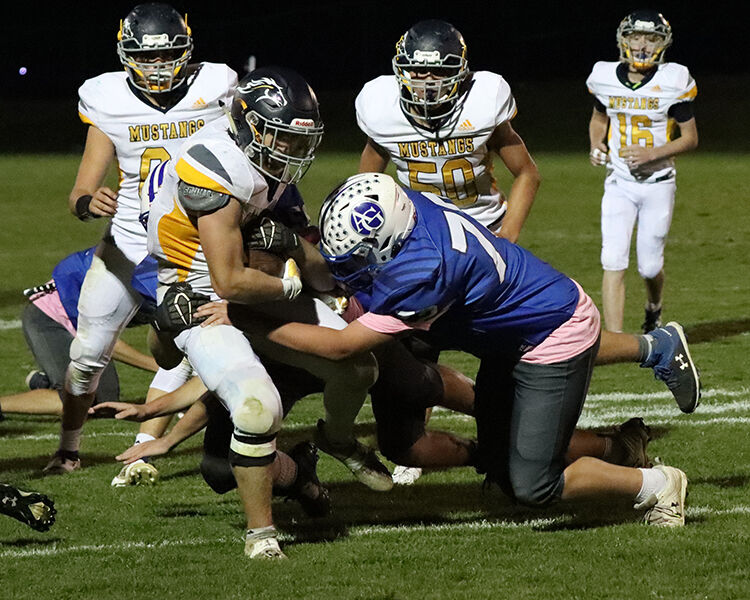 ASHLAND – After their win over Wayne the prior week, the Class C-1 No. 2 Ashland-Greenwood football team came into their home game against Raymond Central focused on putting out another dominant performance. It showed, with the Bluejays dismantling the Mustangs 42-7.

“Our team had a very focused week of practice,” A-G Coach Ryan Thompson said. “Our kids were dialed in, and they executed at a very high level. I am pleased with how our young kids played as well. They came in and battled against some older players but didn’t flinch. It is great to get to see so many players step up and play.”

To begin the game A-G was in good field position on the Raymond Central 46. On the second play of the drive, Nathan Upton broke free for a 38-yard touchdown run and Evan Shepard tacked on the extra point making it 7-0.

After fumbling the ball on their second possession, the Bluejays would get a big play for a score on their third drive of the game. It came on a 53-yard touchdown pass from Dane Jacobsen to Shepard.

A pass picked by Upton on the Mustangs second play of their next possession, gave A-G the ball back on their 12. It took one play for Logan Sobota to find a hole that got him into the endzone for a rushing touchdown that made it 21-0.

Still in the first quarter, Raymond Central did not take much time off the clock with their next possession. It gave the Bluejays one more opportunity to get a touchdown before the end of the quarter, and they took advantage of it, with Jacobsen completing a 22-yard pass to Sobota for a score making it 28-0.

On their first drive of the second quarter, A-G had a nine play drive. The ending result was the same, with the Bluejays scoring on a 39-yard pass from Jacobsen to Sobota.

The Mustangs started to gain some momentum on offense during their next drive as they crossed midfield for the first time in the game. On the 33-yard line, Raymond Central was stopped on fourth giving the ball back to A-G

After fumbling the ball to the Mustangs, Thomas Spears earned the second interception of the game for A-G and returned it 44 yards to the Raymond Central 38-yard line.

Six plays after the interception, Upton was able to run the ball into the endzone from three yards out making it 42-0 Bluejays at halftime.

A-G would end up giving up one touchdown in the second half on a 28-yard run.

Completing 68.75% of his passes in the game for 196 yards and three touchdowns was Jacobsen. Shepard finished with 92 receiving yards and one touchdown and Sobota caught two passes for 61 yards and two touchdowns.

Leading the Bluejays with 81 rushing yards on eight carries and two touchdowns was Upton. Drake Zimmerman had 37 rushing yards, Garret Turner ended with 31 and Sobota had 28 yards and one rushing score.

There were seven sacks recorded in the game for A-G. Mason Forntey and Luke Lambert each had two, while Levi Kennedy, Ty Carey and Braxton Buck had one.

The Bluejays next game is against Malcolm at 7:30 p.m. on the road on Oct. 1. The Clippers won their last game against Louisville 28-14.

ASHLAND – The Class C-1 No. 1 Ashland-Greenwood football team picked up its seventh win of the season with a 21-12 victory over Class C-1 No. …

Against a rated opponent and a school, a class size bigger than A-G, the Bluejays Volleyball Team was not able to pick up a win over the last …

Season comes to an end at subdistricts

ASHLAND – Heading into the Class B-4 Subdistrict tournament at home, the Ashland-Greenwood softball team knew that in order to get to a distri…

BEATRICE – Going into the B-1 District Golf Tournament at the Beatrice Country Club on Oct. 4, Annalise Ptacek had never broken 100 during her…

ASHLAND – The Ashland-Greenwood volleyball team went 1-2 this past week and improved their record to 5-9 on the season. Their lone win came in…