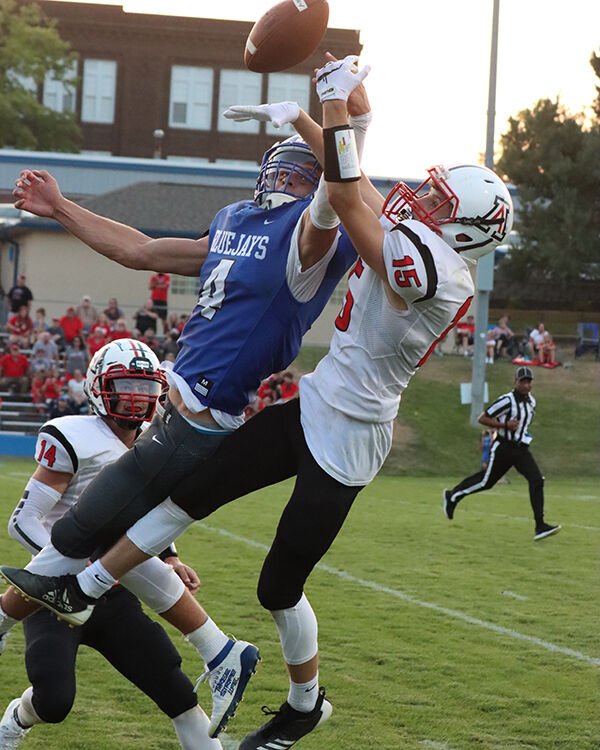 AIR BATTLE: Ashland-Greenwood’s all-around offensive weapon goes up in the air to bring down a pass from Nick Caroll in the second quarter of Friday’s victory over Auburn. The Bulldog defense prevented Jacobsen from making the play, but he made things up with a TD reception later in the quarter. (Staff Photo by Suzi Nelson) 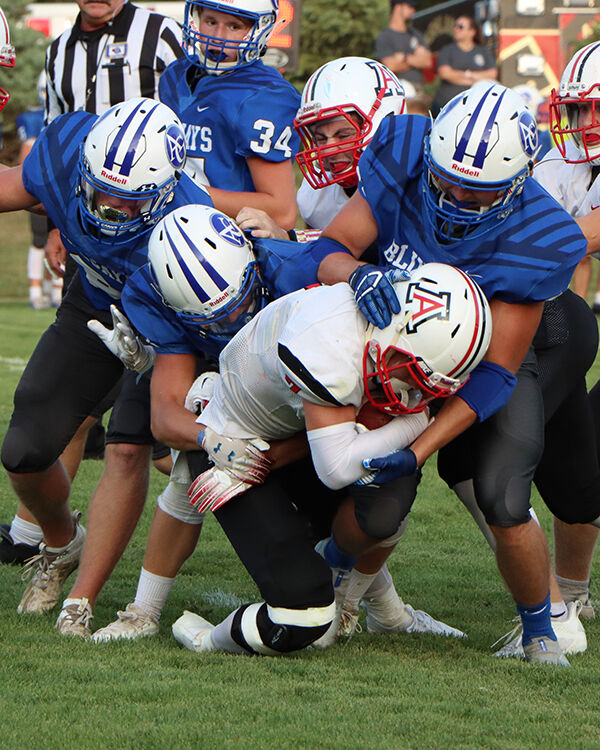 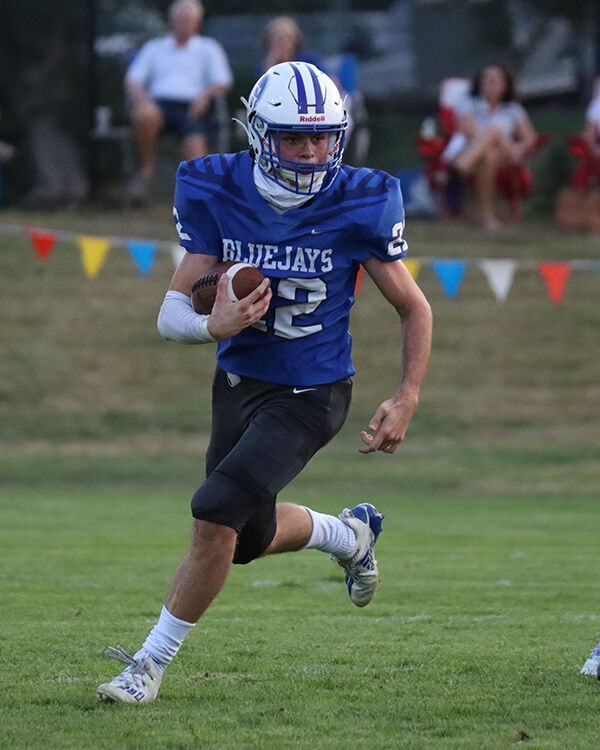 ASHLAND – It was a thrilling home opener for the Ashland-Greenwood Bluejays on Friday night.

The Jays rallied for a 21-20 win over the visiting Auburn Bulldogs.

The Bulldogs closed in on the Jays with time running out, scoring on a 69-yard pass play, but the home team was able to deny a two-point attempt which would have won the game for the visiting Bulldogs.

“What a way to start the season. I am so proud of the players for trusting each other and not cashing it in when the game felt like it was falling apart,” said Ashland-Greenwood Coach Ryan Thompson.

The Bluejays trailed the entire first half and didn’t get on the scoreboard until the final minute of the second quarter.

Junior quarterback Cale Jacobsen switched roles and lined up as a wide receiver, hauling in a pass from backup quarterback Nick Carroll on a 15-yard scoring play. Cody Grauerholz added the extra point and the Jays trailed 14-7 at halftime.

Jacobsen went to the air in the third quarter to tie the game. He found senior receiver Lane Zimmerman from 23 yards out to even the score at 14 going into the fourth quarter.

The Jays put together a 10-play drive and capped it with a one-yard touchdown run from Matthew Schuster. Grauerholz added the crucial PAT and the Jays led for the first time 21-14.

Auburn took over and needed five plays to close to within 21-20, but the Jays were able to thwart the two-point conversion and secure the victory.

Schuster rushed for 106 yards and 18 carries to lead the Jay rush attack.

Jacobsen led the Jays with 10 tackles.

Logan Sobota came through with eight tackles and intercepted a pass.

“Game one usually reveals the potential for a team and I think we have the potential to compete at a high level. We have a few things to correct, but I’m sure the players will be willing to get to work during practice this week,” said Thompson.

ASHLAND – After getting rained out Sept. 10 the Ashland-Greenwood Bluejays returned to action on Saturday to play host to an invitational.

AIR BATTLE: Ashland-Greenwood’s all-around offensive weapon goes up in the air to bring down a pass from Nick Caroll in the second quarter of Friday’s victory over Auburn. The Bulldog defense prevented Jacobsen from making the play, but he made things up with a TD reception later in the quarter. (Staff Photo by Suzi Nelson)