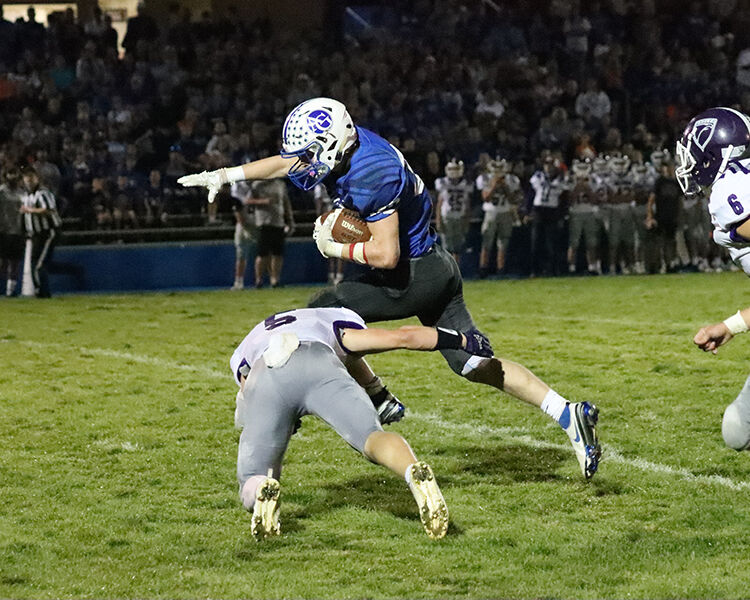 UP AND OVER: Bluejay running back Nathan Upton goes over a Milford defender on his way to the goal line during Ashland-Greenwood’s 33-0 shutout in Ashland last Friday night at Ashland’s Memorial Stadium. (Staff Photos by Suzi Nelson) 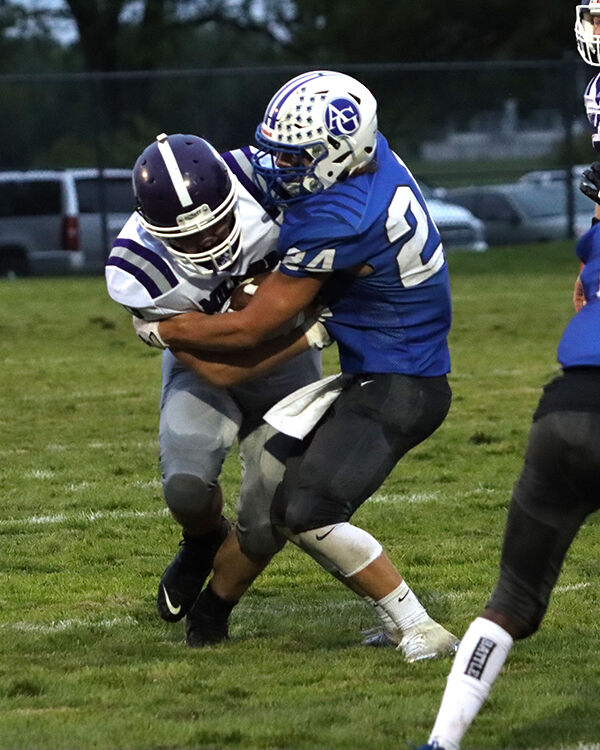 ASHLAND – After a hard-fought win in their first game, the home opener was never in doubt for Class C1 No. 4 Ashland-Greenwood as they faced Milford on Sept. 3. The Bluejays soared on both offense and defense as they shut the Eagles out by a final of 33-0.

“I felt our players came out locked in tonight and were ready to play from the start,” A-G Head Coach Ryan Thompson said. “Our execution wasn’t the best early, but we settled in and really controlled the game for most the night. Our defense was able to keep Milford off schedule all night, forcing into tough situations and our offense was patient letting our offensive line go to work and wear down Milford’s defense. It was another team win that the players should be proud of.”

A-G opened the game up by going to the air in the first quarter. It worked to their advantage as Dane Jacobsen completed a 63-yard pass to Evan Shepard. The extra point was no good, and after their first possession the Bluejays led 6-0.

In the second quarter, Logan Sobota picked up where he left off a week ago, with a six-yard touchdown run. Shepard’s extra point kick was good putting A-G in front by two possessions at 13-0 at halftime.

For the second time in the game, Jacobsen connected with Shepard for a touchdown to begin the third. This time it was an 11-yard completion that increased the Bluejays lead to 19-0.

Nathan Upton was the next A-G player to find the endzone. He took a handoff from Jacobsen and plowed ahead eight yards for the score making it 26-0.

Completing his third touchdown pass of the game for the Bluejays was Jacobsen when he connected with Carter Washburn for seven yards.

This was by far the more balanced of the two games that A-G has played this season. The defense was able to produce stops and pitch a shutout and the offense was strong through the air and on the ground, which was made evident with three passing touchdowns and two rushing scores.

Jacobsen completed five out of eight passes in the game for 122 yards. He had a long pass of 63 yards and threw three touchdowns.

Despite not scoring a touchdown, Drake Zimmerman was the lead rusher for the Bluejays with five attempts for 67 yards. Nathan Upton ran the ball nine times for 41 yards and a score and Sobota had four rushes for 31 yards and a touchdown.

Hauling in three catches for 98 yards and two scores was Shepard. Carter Washburn had two catches for 24 yards.

Sobota led the team defensively with eight tackles, while Thomas Spears finished with six. Intercepting the ball once in the game was Jaxson Hamm and Ty Carey recovered one fumble.

BEATRICE – Going into the B-1 District Golf Tournament at the Beatrice Country Club on Oct. 4, Annalise Ptacek had never broken 100 during her…

ASHLAND – The Class C-1 No. 1 Ashland-Greenwood football team picked up its seventh win of the season with a 21-12 victory over Class C-1 No. …

Season comes to an end at subdistricts

ASHLAND – Heading into the Class B-4 Subdistrict tournament at home, the Ashland-Greenwood softball team knew that in order to get to a distri…

Against a rated opponent and a school, a class size bigger than A-G, the Bluejays Volleyball Team was not able to pick up a win over the last …

The Ashland-Greenwood Cross Country Team was able to earn one medal at the Nebraska Capital Conference Invite at Arlington High School. It was…

ASHLAND – After their win over Wayne the prior week, the Class C-1 No. 2 Ashland-Greenwood football team came into their home game against Ray…

ASHLAND – The Class C-1 No. 2 Ashland-Greenwood football team earned a hard-fought victory over Class C-1 No. 10 Wayne on Sept. 17 at home. Wh…

ASHLAND – The Ashland-Greenwood cross country team took part in their home invite on Sept. 20 in Ashland. Leading the Bluejays with a top 10 f…

ASHLAND – The Ashland-Greenwood girls golf team was able to accomplish something that hasn’t been done since the 1990s at the school. That was…

BENNINGTON – The Ashland-Greenwood girls golf team walked away with two medals from the Bennington Invitational held on Sept. 14. They were fr…

UP AND OVER: Bluejay running back Nathan Upton goes over a Milford defender on his way to the goal line during Ashland-Greenwood’s 33-0 shutout in Ashland last Friday night at Ashland’s Memorial Stadium. (Staff Photos by Suzi Nelson)