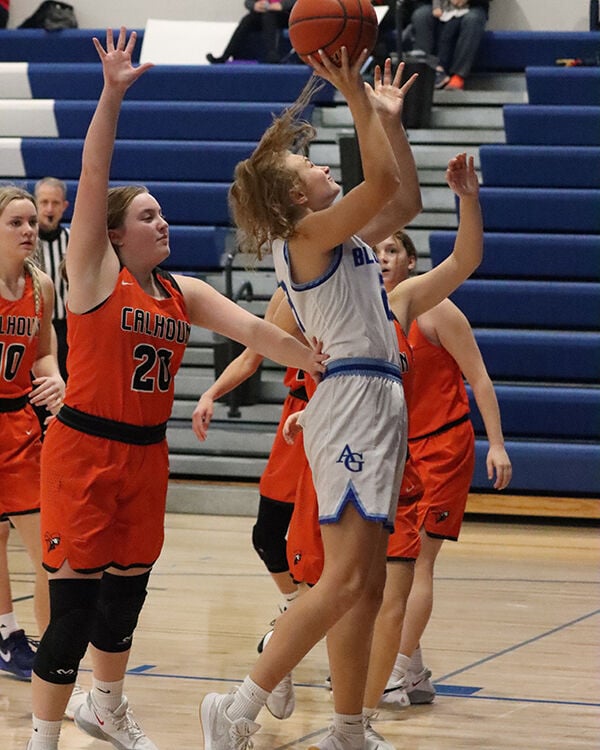 IN THE BOOKS: Ashland-Greenwood Jacey Myers scores two points in the Bluejays’ win over Fort Calhoun on Saturday afternoon in Ashland. (Staff Photo by Suzi Nelson) 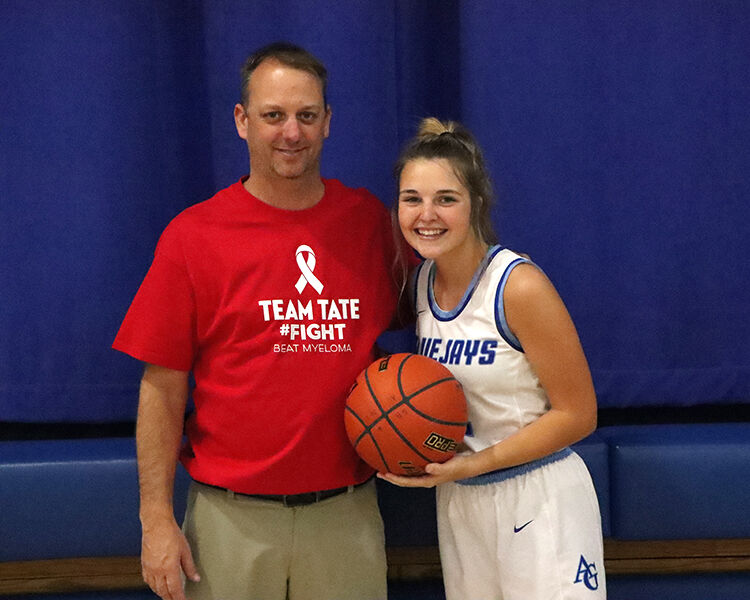 ASHLAND – Senior guard Kiara Libal led the Ashland-Greenwood girls basketball team to a big win and in the process set a school record for scoring.

The Jays dominated 56-20 the Fort Calhoun Pioneers on Saturday afternoon in front of the home crowd.

The game got off to a great start for the Bluejays. AGHS held the Pioneers scoreless the entire quarter and scored 22 points to lead 22-0 after eight minutes.

AGHS led 33-9 at the half and multiple reserves were able to finish out the big win for the Jays.

It was a historic night for Libal. The senior scored 22 points to lead all scorers and became the school’s all-time leading scorer, passing 2006 AGHS graduate Tara Abbott on the all-time scoring list. Libal upped her career total to 1,301 points.

The 5-5 senior guard raised her season average to 19.8 points per game.

The Jays started their week with a home contest against undefeated and third-ranked Elkhorn North at on Jan. 5. A strong second quarter led the Wolves to a 75-45 road win.

The Bluejays and Wolves were tied at 16 after eight minutes, but Elkhorn North erupted for 29 points in the second quarter and went into the locker room with a 45-26 lead over the home team.

The Bluejays were limited to just 19 points in the second half and Elkhorn North was able to increase the margin to 30 points by the end of the game.

The Bluejays shot 28% from the field and turned the ball over 19 times against the Wolves.

AGHS was able to convert on 12-of-14 from the free throw line.

Libal poured in 19 points to lead the home team offensively. She made 6-of-15 from the field and converted on all six of her free throw attempts.

AGHS improved to 6-5 on the season and took to the road on Tuesday night when they traveled to Platteview to take on the Class B Trojans. Results will be in next week’s newspaper.

GRAND ISLAND – The Ashland-Greenwood wrestling team made an impromptu trip to Grand Island on Saturday to compete in the Northwest Invitational.

IN THE BOOKS: Ashland-Greenwood Jacey Myers scores two points in the Bluejays’ win over Fort Calhoun on Saturday afternoon in Ashland. (Staff Photo by Suzi Nelson)