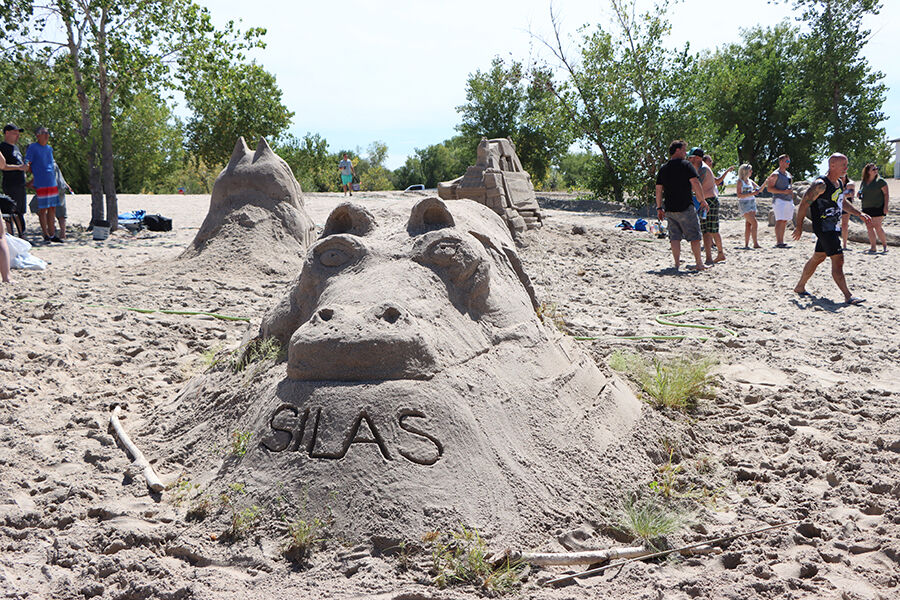 SAND CREATIONS: Silas the hippo is one of five sand sculptures created during a team bonding event for Urology Cancer Center that was held Saturday at Sandy Pointe, a rural lake development north of Ashland. World champion sand sculptor Ted Siebert also designed a custom sculpture for the cancer center, which is owned by Dr. Luke Nordquist, who has a home at Sandy Pointe. (Staff Photos by Suzi Nelson) 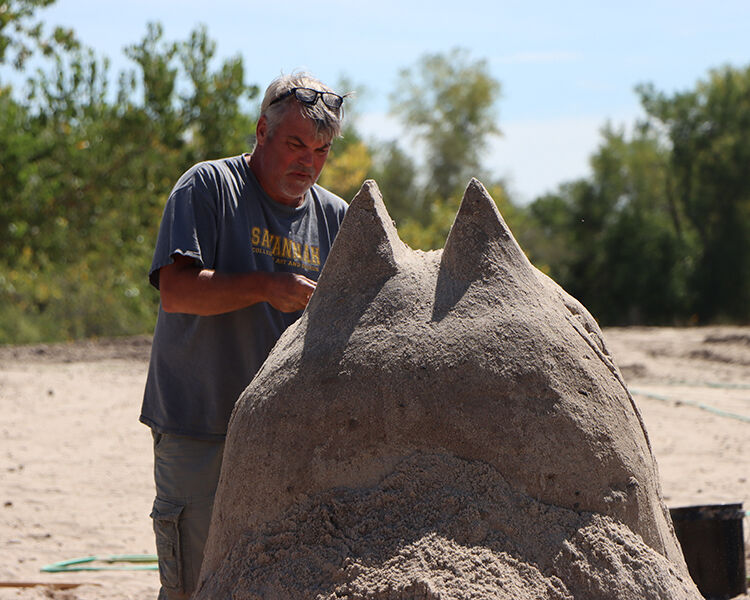 But his favorite type of sand comes from the sand pits around Ashland.

“It’s exactly the kind of sand I want to work with,” he said.

On Saturday, the nine-time world record holder was at Sandy Pointe, a rural neighborhood built on the banks of lakes created after dredges mined the precious sand and gravel that populates the banks of the Platte River.

Dr. Luke Nordquist had invited Siebert to Sandy Pointe to help with a team bonding exercise he was holding for his employees at Urology Cancer Center, a health care facility that specializes in treating prostate and urologic cancers located in Omaha.

Nordquist has a home at Sandy Pointe, so he is familiar with the sandy beaches there. Thinking Siebert needed better sand to work with, Nordquist was prepared to haul in special sand for the event when Siebert put a halt to the notion. The castle-creating sand artist wanted to use the native sand at Sandy Pointe instead, because of the high content of silt it possesses.

“It’s the magic dirt that holds everything together,” Siebert said.

The sand on ocean beaches is too clean to pack well, the sand sculpting expert said, because it is washed as the tides go in and out. Instead, he prefers the muddier version that lies along rivers.

Siebert and his son spent Friday preparing his favorite type of sand for the five teams that were going to compete in the sand sculpting challenge. They compacted sand into mounds so it would be easier for the sculptors to shape their creations.

“Forty tons of sand had to be set up,” Siebert said.

The sculpting contest started at 8 a.m. Saturday morning and concluded before noon, when Dan Muhleisen, one of the developers of Sandy Pointe, judged the winner. The prize was a commemorative plastic bucket and spade that acted a as a trophy.

The winner was a fish created by the team of Matt McDonald, Megan Johnson, Staci Erickson and Ashland native Wendy Dierks White. The team found the image on Google, and then added their own special touch.

“We used some sunflowers to add a little pizzazz,” said Erickson.

After the sculptures were completed, Siebert sprayed a sealant on them that will keep the creations intact until the first frost, as long as vandals stay away. The other creations included a hippo named Silas, a mermaid, a snarling cat and a person sitting on a bench with his toes in the sand.

Siebert also created a custom sculpture for Nordquist that depicted his cancer center and the Omaha skyline. It will be something Nordquist will long remember, as it came from a man who has made his life sculpting sand.

A native of the Northwest Pacific area, Siebert has traveled to all but five of the United States and 700 countries to create sand masterpieces. He has been a professional sand sculptor for over three decades, winning numerous North American, U.S. and Canadian titles and world championships. His world records came when he worked as the co-captain of the competitive team Totally in Sand. A castle commissioned by Turkish Airlines in Florida stands 45.85 feet tall, the tallest in the world.

Siebert is a trained artist with a degree in creative writing who discovered competitive sand sculpting in his teens. He owns the Sand Sculpture Company, based in the Chicago area. He has written two books on sand castle building.

Saturday was his first trip to Nebraska to sculpt.

WAHOO – Despite the fact that the risk dial last week dropped back into the moderate range, Saunders County is seeing a troubling spike in COV…

ASHLAND – The Ashland-Greenwood Board of Education moved forward with land acquisition for proposed new facilities.

SAND CREATIONS: Silas the hippo is one of five sand sculptures created during a team bonding event for Urology Cancer Center that was held Saturday at Sandy Pointe, a rural lake development north of Ashland. World champion sand sculptor Ted Siebert also designed a custom sculpture for the cancer center, which is owned by Dr. Luke Nordquist, who has a home at Sandy Pointe. (Staff Photos by Suzi Nelson)