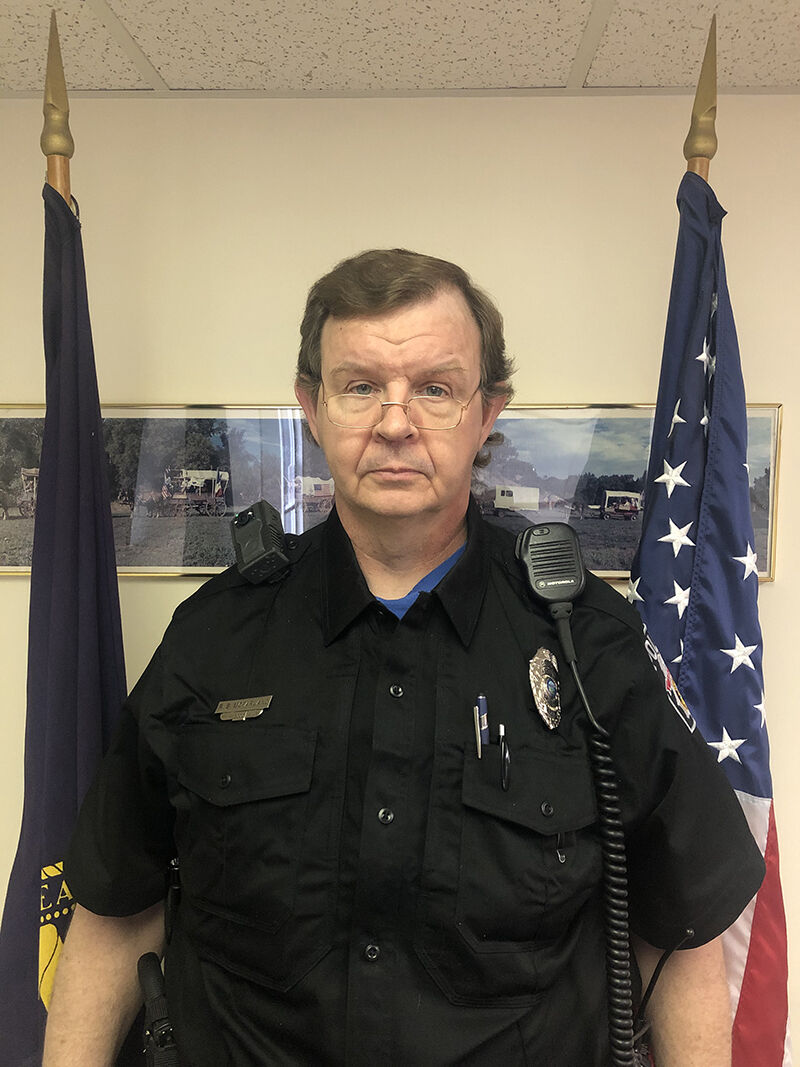 OUT OF PLACE: This xray shows some of the screws originally put into Robert McFarland's shoulder have come loose. The Ashland Police officer underwent shoulder replacement surgery on Tuesday.

He had just celebrated 20 years as a police officer, had finished up his six-month probation period with the APD and gotten a raise, and had settled into his new house in Ashland with his wife when tragedy struck.

McFarland was on duty in Ashland the night of Oct. 30, 2020 when he was dispatched to a domestic disturbance call. He arrived to find the suspect, Dylan McClain, intoxicated. He was accused to assaulting his girlfriend. When McFarland and a deputy from the Saunders County Sheriff’s Department tried to put McClain in handcuffs, he resisted. During the struggle, McClain and McFarland fell to the ground.

McFarland remembers hitting a table leg or some type of debris on the floor with his shoulder.

“When I hit it shattered my humerus into six pieces and dislocated it to the rear. Oh man, I mean it literally exploded,” he said.

He was taken to an Omaha hospital, where surgeons installed 11 screws and a plate to put his shoulder back together.

With regular physical therapy, McFarland was making slow progress until he hit a setback.

“Apparently the bones didn’t fuse together properly and my hardware started coming out,” he said.

One of the screws is floating around in his arm. Another has worked its way toward the skin and can actually be felt poking out, McFarland said.

To repair the damage, McFarland had a total shoulder replacement on Tuesday. Nearly a year after the incident, when he thought he’d be recovering from the initial injury, McFarland is now recovering from major surgery. It could be 12 to 18 months before he is fully healed, but even then he won’t have complete use of his shoulder.

“The doctor said that I might have 70% range of motion,” he said.

McFarland said he has a 50-50 shot at going back to law enforcement, a career he has had since high school.

“All I’ve ever done is law enforcement work,” he said. “To find another job that would pay more than I was making here and not doing the work that I had been doing is difficult at best.”

McFarland started working as a security guard for Lincoln Telephone and Telegraph and Alliant Communications after graduating high school in North Platte. When Alliant was sold, he took a job in law enforcement. That was in 2000.

His first job was at the Hall County Sheriff’s Department in Grand Island.

He later became chief of police in Minatare, a small city in Scotts Bluff County. But cutbacks downsized the police department, and McFarland was out of a job. The next town over, Bayard, gave him a job in their police department. He was there for a year before coming to Ashland.

McFarland and his wife moved to Ashland, buying a house in the city’s east side. They budgeted carefully, planning on the raise McFarland would get after the probation period with the APD was over, and for his part-time police work in neighboring communities.

Workers Compensation is paying McFarland two-thirds of his salary, based on the six months previous to the injury. Because he was on probation, the salary it is based on is not very high.

His wife, a former paramedic, is on disability. The significant reduction in their salary has put their home in jeopardy. When their cat became ill and died, they were faced with a $400 vet bill that left them unable to pay the mortgage. Car repairs and late fees added to the burden. They started shuffling money around, but payments for other bills were missed as they scraped by.

Now they have put the house up for sale. McFarland said the market is tipping back from the high it’s been on, and he is not anticipating they will get what they want, or need, for the house.

“It seems like the market just dumped off the edge right now,” he said.

They hope to move stay close to Omaha so McFarland can continue medical treatment. They are looking at communities where houses are cheaper than Ashland.

“We’re hoping to sell our house for just enough so we can buy something cheap somewhere else and not have a house payment,” he said.

Those in the community who are aware of McFarland’s situation have begun to help. At KC’s Eastside Saloon, they got to know McFarland when he worked nights and came by to check on the business. They took up a collection. Riverview Community Church has provided gift cards and other monetary help.

He also said the City of Ashland has done their best to help, including allowing him to continue purchasing health insurance.

“As far as the city goes, they’ve done everything they can for me (but) they’re bound legally and their hands are pretty much tied,” he said.

Any possible settlement is years down the road, he added.

Last week, McFarland set up a Go Fund Me Page (gofundme.com/f/help-injured-police-officer-with-daily-expenses) at the suggestion of a friend. As of Monday, $420 of the $3,000 goal has been donated.

Suzi Nelson is the managing editor of The Ashland Gazette. Reach her via email at suzi.nelson@ashland-gazette.com.

ASHLAND – After serving the Ashland VFW Post 9776 for nearly 40 years, the VFW Hall has been donated to the local American Legion Post and ren…

Cruisin’ Into Christmas revs up holidays

ASHLAND – You’ll need a vehicle of some sort to enjoy Cruisin’ Into Christmas, Ashland’s version of a holiday festival this year.

Local vendors among those scheduled for holiday craft show

ASHLAND – After going virtual last year, the Hometown Holidays Vendor and Craft Show is back in person.

ASHLAND – The newly-formed Ashland Creative District Committee is asking the public to create a flag to represent Ashland.

ASHLAND – A watered down version of a previous fireworks ban has been adopted by the Ashland City Council.

ASHLAND – For over a century, women in Ashland have had the opportunity to donate their time and talents to support the community through spec…

Reservoir between Omaha and Lincoln eyed for possible pandemic funding

ASHLAND – The COVID-19 pandemic closed the Ashland Historical Museum for several months. But the facility, which is located in the former libr…

OUT OF PLACE: This xray shows some of the screws originally put into Robert McFarland's shoulder have come loose. The Ashland Police officer underwent shoulder replacement surgery on Tuesday.