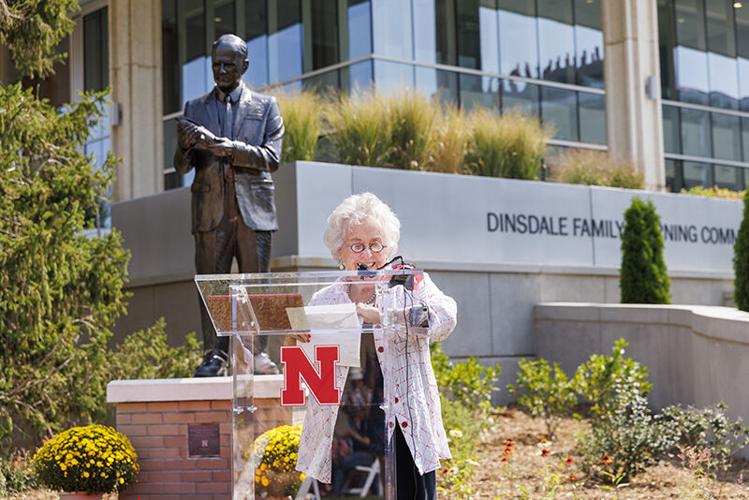 MEMORIES OF STRAWBERRIES: Ruth Scott talks to the crowd and describes how she worked for George Beadle’s dad and picked strawberries for a half cent per pint during the Great Depression during a ceremony that unveiled a new statue of Beadle on the campus of the University of Nebraska-Lincoln. (Photos by Craig Chandler/University Communication) 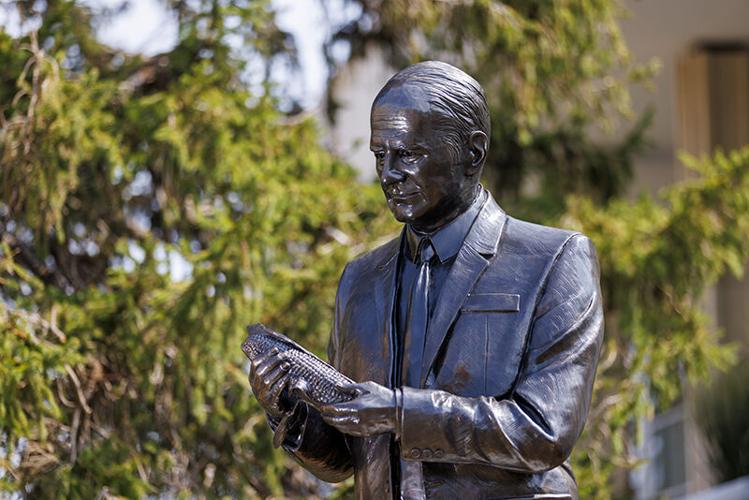 A life-sized sculpture of the native of Wahoo was unveiled Sept. 13 during a ceremony led by Chancellor Ronnie Green. Held at the Dinsdale Family Learning Commons, the event also honored University of Nebraska-Lincoln supporters Ruth and Bill Scott.

The Scotts, philanthropists and Nebraska U alumni, recently provided a leadership contribution toward the $22.5 million renovation and redevelopment that transformed East Campus’ C.Y. Thompson Library into the modern Dinsdale Family Learning Commons.

Ruth Scott, having grown up in Wahoo, is also a champion of Beadle’s success story. Her connection was forged through contact with the Beadle family, including working for and picking strawberries at the Beadle farm.

“Today, we honored two Nebraskans, both born in Wahoo, whose work distinguishes our great university,” Chancellor Ronnie Green said. “First, George Beadle, whose Nobel Prize-winning research defined our understanding of genetics and led to an entire new field of study. And – second to no one – the incredible Ruth Scott, whose family’s support continues to expand and redefine our research, teaching and engagement missions.

“Two Huskers who, in their own unique ways, inspire generations of our graduates to do big things, opening doors to opportunities that impact Nebraska and the world.”

George Wells Beadle was the son of Chauncy Elmer Beadle (who Ruth Scott often recalls from her trips to the farm) and Hattie Albro. Educated at Wahoo High School, Beadle was on a path to becoming a farmer when a teacher noticed his ability in science-based studies.

Persuaded by that teacher, Beadle enrolled at the University of Nebraska and took classes in the College of Agriculture. His interest in genetics was fueled by studies on campus – including wheat breeding research conducted alongside Professor F.D. Keim, a protégé of the great botanist Charles Bessey.

He completed a doctorate at Cornell University in 1931, served as a faculty member at several universities, and later became chancellor and then president of the University of Chicago, where he served until retiring.

In 1958, Beadle shared a Nobel Prize in Physiology or Medicine with Edward Tatum for their discovery that genes determine the structure of enzymes and, thereby, affect heredity. Dubbed the “one gene-one enzyme” concept, Beadle and Tatum’s work – which was completed at Stanford University – led to the founding of biochemical genetics.

Beadle cultivated a field of corn wherever he lived and continued to conduct research, striving to clarify the origins of domestic corn.

During his career, Beadle received many honorary degrees, awards and societal memberships. Nebraska awarded him an honorary Doctor of Science degree in 1949.

Today, his legacy is honored through the University of Nebraska-Lincoln’s Beadle Center, home to programs in biotechnology, biosciences and plant sciences; the George Beadle Scholarship; and the new sculpture on East Campus.

Following the unveiling of the Beadle sculpture (completed by members of the UNL Rodeo team), the event included tours of the Dinsdale Family Learning Commons and the university’s 10,000-square-foot Gnotobiotic Mouse Facility, and customized “Beadle Berry” strawberry ice cream from the UNL Dairy Store.

The sculpture is part of an ongoing renovation of East Campus’ Legacy Plaza – a dedicated green space framed by the Dinsdale Family Learning Commons, Nebraska Union, Dairy Store and East Campus Mall. Design of the plaza continues with construction planned for the spring semester and completion scheduled for fall 2023.

MEMORIES OF STRAWBERRIES: Ruth Scott talks to the crowd and describes how she worked for George Beadle’s dad and picked strawberries for a half cent per pint during the Great Depression during a ceremony that unveiled a new statue of Beadle on the campus of the University of Nebraska-Lincoln. (Photos by Craig Chandler/University Communication)