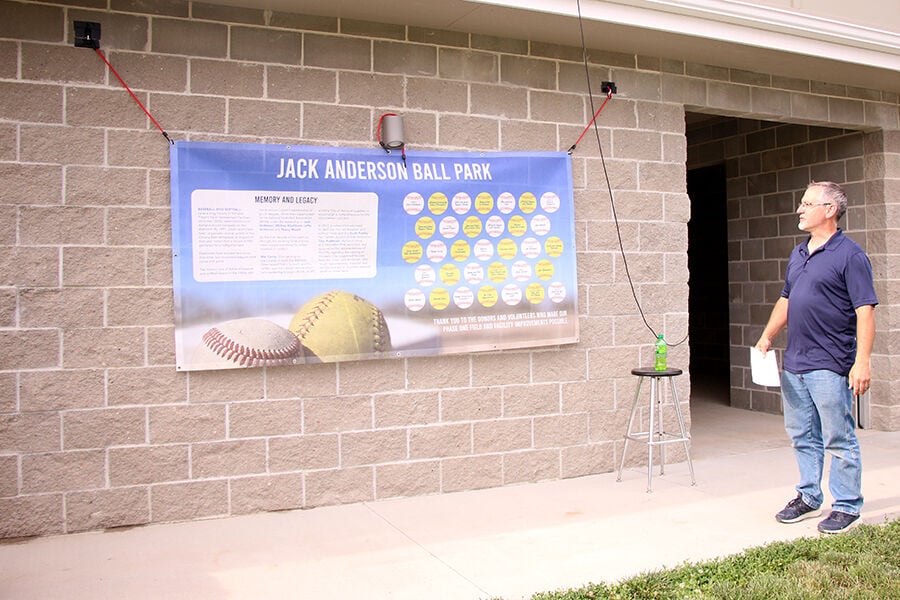 DONOR RECOGNITION: John Keith, president of the Ashland Youth Ball Association (AYBA) shows a banner that represents the plaque that will be installed at Jack Anderson Ball Park to recognize donors to the Field of Dreams project over the yeras. (Staff Photo by Anna Boggs) 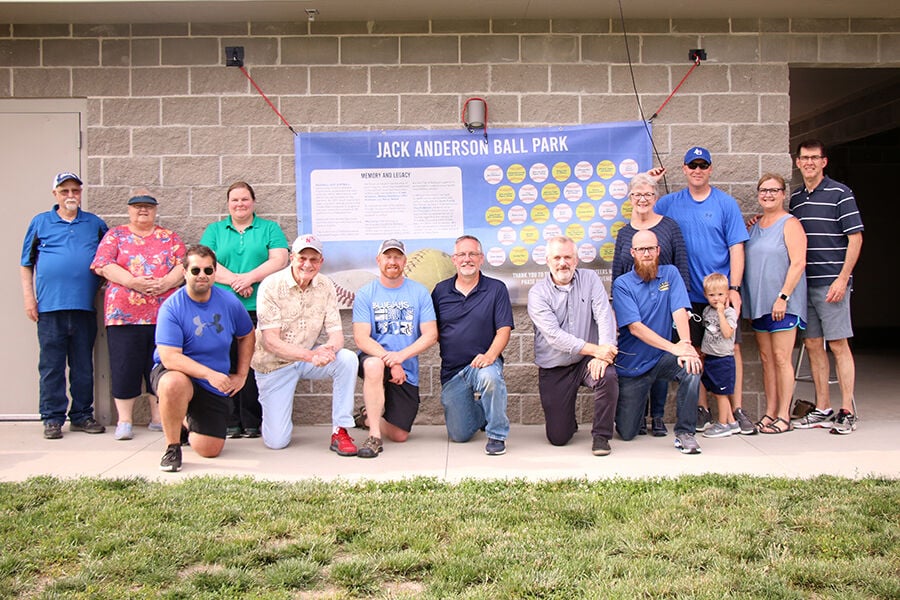 ASHLAND – There have been many generous donors over the years who have given money to the Field of Dreams campaign to improve the baseball and softball fields in Ashland.

Those donors were recognized by the Ashland Youth Ball Association (AYBA) during a ceremony on May 25 that announced plans to install a donor recognition board in the breezeway at the Scott Family Fan Center at Jack Anderson Ball Park.

The improvement plan began many years ago and has undergone many revisions. But the AYBA wanted to make sure everyone is acknowledged for their contributions, said John Keith, president of the organization.

The Ashland and Greenwood communities have always been supportive of the youth who learn, play and love the sport of baseball, softball and t-ball,” he said during the ceremony. “Many years ago ballpark supporters began the Field of Dreams project to better the ball fields for the youth ball players in our community.”

Over the years, the improvements have included a new softball field, a new grass-infield Legion baseball field, new lights on those and other fields in the complex, as well as the construction of the Scott Family Fan Center and creation of a large parking lot.

“This is all due to the support of our community and donors who helped make this happen,” Keith said.

Plans are in the works for more projects like a memorial flagpole, concrete floors in the softball and baseball dugouts, new field equipment including a Mule to help drag and prep the fields, upgrades to the score booth in the Fan Center and a new scoreboard on the Legion baseball field.

“We plan to continue improvements at the ball park including work on the existing fields, improving the t-ball area, improved parking and increased safety for the fans cheering on their favorite player,” Keith added.

LINCOLN – State officials unveiled proposals on Jan. 10 for $700 million in water resource development in Nebraska, pointing to the vital impo…

YUTAN – Applications are being taken to fill a vacancy left by the recall of a county supervisor.

LINCOLN – On Dec. 29 at the direction of Gov. Pete Ricketts, Lt. Gov. Mike Foley signed a disaster proclamation in response to the severe wind…

Community helps out in time of need

ASHLAND – Jean Stewart, chairman of the Toys for Tots campaign and the director of the Ashland Food Pantry, reported that individuals, churche…

ASHLAND – As construction continues on Ashland-Greenwood Public Schools’ new facilities, the school district’s Board of Education still has pl…

DONOR RECOGNITION: John Keith, president of the Ashland Youth Ball Association (AYBA) shows a banner that represents the plaque that will be installed at Jack Anderson Ball Park to recognize donors to the Field of Dreams project over the yeras. (Staff Photo by Anna Boggs)