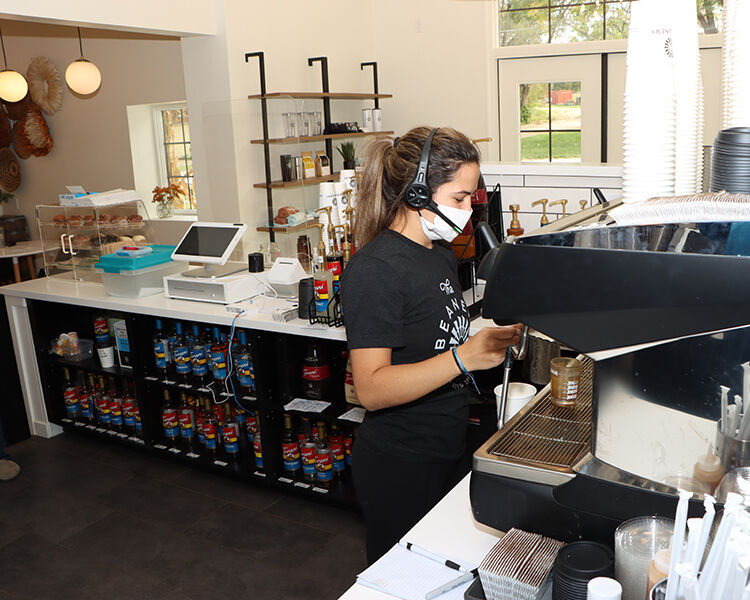 COFFEE: Michaela Hittner of Gretna makes a coffee drink at The Beanery, a new coffee shop on Highway 6 in Ashland. (Staff Photo by Suzi Nelson) 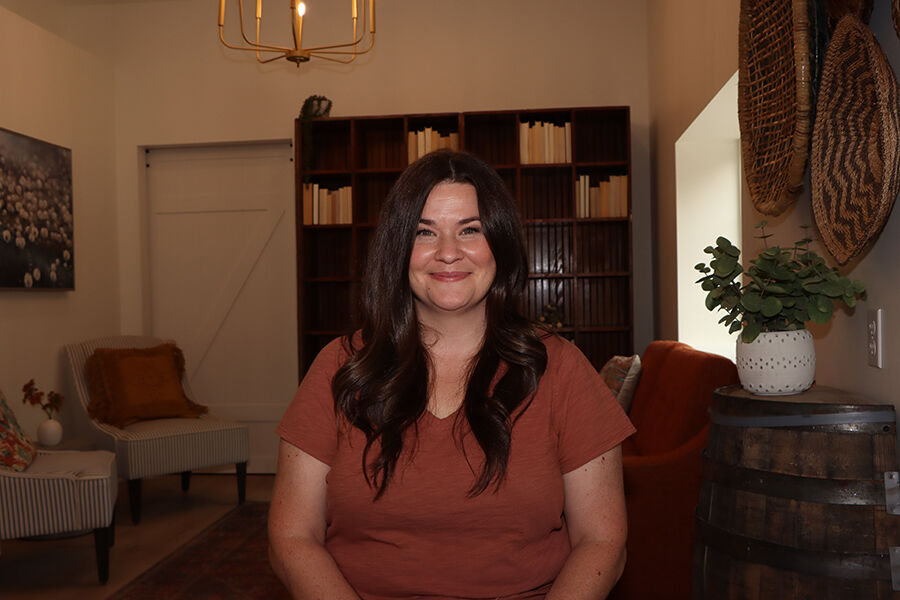 ASHLAND – Revonna and Paul White are high school sweethearts who have brought their love of coffee and community to Ashland.

The couple opened The Beanery in August. It is located on Highway 6 in the former Roslyn’s restaurant building.

This is the third location of their small chain. They opened their first store in Gretna in 2003, months before their wedding. Four years ago they branched out into downtown Papillion and now they’ve headed west to Ashland.

Coffee had been a part of the White’s lives for many years. Revonna White was first exposed to the coffee business when she visited her grandmother’s coffee shop in Colorado. She’d stand on a milk crate and run the cash register.

“I think I could make a latte before I could drive,” she recalled.

As a teen, she got jobs at national coffee chain stores in Omaha, where she grew up.

“”Coffee shops were the cool place to work in high school,” she said.

She brought Paul White into the coffee business while they were a couple during high school. They began seriously dating right after graduation, she said. It was just a few years later that they were opening their own store together.

Revonna and Paul White have witnessed entrepreneurship first-hand in their families, as parents and grandparents owned their own businesses, she said.

“So that part of it comes naturally,” she said.

The Whites closed on the new building on April 1, just as the COVID-19 pandemic was kicking into full gear. It was a scary time to be opening a new business, but there was no turning back.

“We were in the thick of it,” Revonna White said.

Despite the uncertainty caused by the pandemic, the Whites kept moving forward, having faith that things would get better.

“We felt it was the right thing to do,” she said.

They chose the Highway 6 location as a way to capitalize on the heavy traffic on Husker football game days, White said. That was delayed when the Big 10 initially called off the football season. Now that the conference reversed the decision and games will start up later this month, they’d like to be the place where Husker fans stop for a treat on their way to Memorial Stadium.

“As lifelong Husker fans, we know game days are a big deal,” White said. “We hope to be part of those traditions.”

Before opening the doors to customers, the Whites had plenty to do at their new Ashland store. They started a complete remodel, stripping the walls down to studs, removing the flooring and tearing down the drop ceiling.

“For the most part, we touched every inch of this place,” White said.

They punched out an exterior wall and created a drive-thru window, which has proved very popular in a community that has only one other eatery where one can get something to eat without getting out of their car.

The remodel achieved a more open, relaxed atmosphere. The walls were painted white and décor reminiscent of the rural area around Ashland and the community’s quaint downtown was put in place.

“We love being able to tailor to what’s important to each place,” White said.

The goal was to make The Beanery a place where people want to hang out in Ashland.

“We want to have that feel,” she added.

The next area they will tackle is the outdoor patio, where they will include a photo backdrop.

“Every time they’re in the community, people need somewhere to take a picture,” White added.

Although they now own three stores under the same name, The Beanery is far from a chain.

They are also proud to become involved in the communities where they have invested their money and time into creating a new business.

“We’re intentional about integrating into the communities that we’re in,” White said.

That includes becoming involved in the local schools and churches.

“We love the sense of pride within the communities because people care about each other, and that’s something very important to us,” said White.

White said they prefer to hire local employees because they have a sense of ownership in their community.

“The people who live here, they care about it,” she said.

Although they have been open less than two months, business has been great so far, according to White.

“It’s been super fun,” she said. We really felt the support of the community and how excited they are.”

ASHLAND – It was a place where families gathered for a meal cooked from scratch, teenagers crowded into booths after basketball games to play …

ASHLAND – Dozens of family members of the building’s namesake, friends of the camp, descendants of the founders and generous donors packed the…

ASHLAND – For the first time in 15 years, the Strategic Air Command and Aerospace Museum will welcome a new aircraft to its collection. The F-…

WAHOO – It took a crane and the removal of a hallway of windows to extract the old MRI scanner magnet at Wahoo’s Saunders Medical Center.

ASHLAND – Artworks by nine Ashland-Greenwood High School students have been selected to be published in Mediums for Change. Part of the Youth …

COFFEE: Michaela Hittner of Gretna makes a coffee drink at The Beanery, a new coffee shop on Highway 6 in Ashland. (Staff Photo by Suzi Nelson)