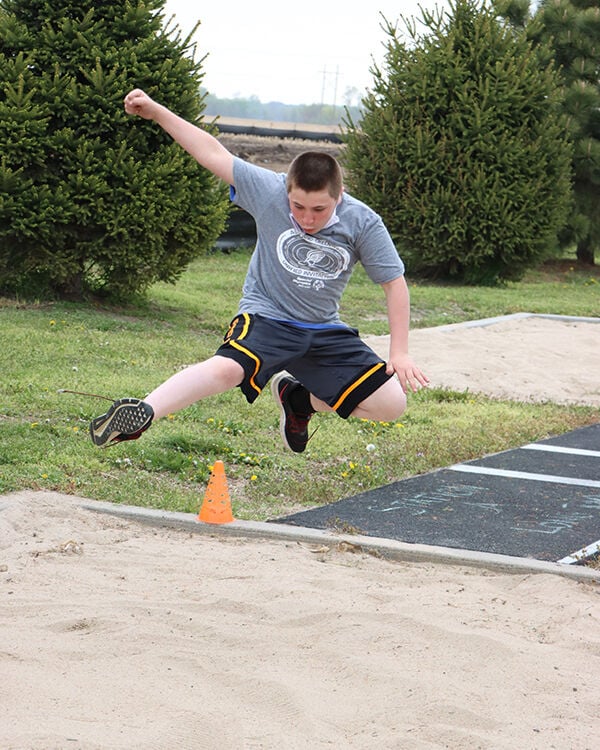 SOARING: Teddy Risney looks like a super hero as he leaps through the air during the long jump event at the Unified Track and Field Meet on April 28 in Ashland. The Ashland-Greenwood student was one of more than 200 athletes from 11 schools that competed in the meet. (Staff Photo by Suzi Nelson) 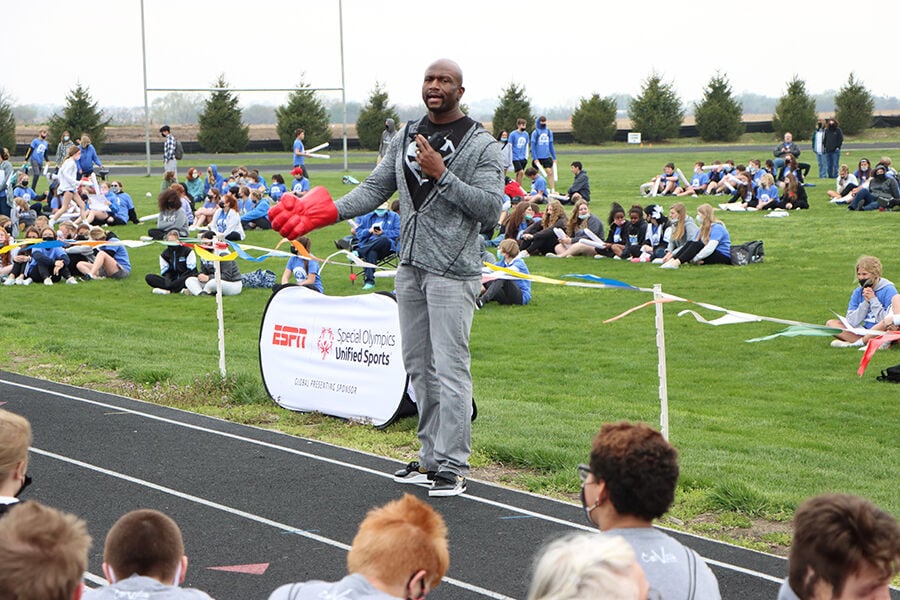 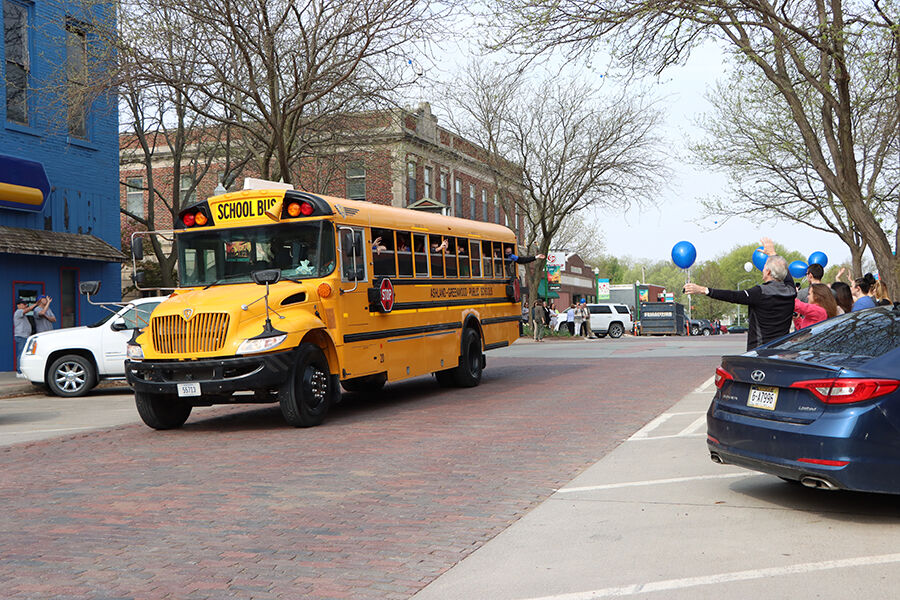 PARADE: The Ashland-Greenwood Unified Team drives through Ashland as members of the downtown business community gather to cheer on the student athletes on the morning of April 28.

ASHLAND – Dozens of family members of the building’s namesake, friends of the camp, descendants of the founders and generous donors packed the deck of the Hazel Dillon Lodge to dedicate the new building on Sunday afternoon.

A ribbon cutting and dedication ceremony for the newest facility at Carol Joy Holling Camp was held along with tours of the building and delicious refreshments consumed in the dining hall where hundreds of campers will eat later this summer.

The Hazel Dillon Lodge was made possible by the generous donation of the lead gift by Sid Dillon Sr., the owner of a string of car dealerships in the state, in honor of his late wife, Hazel, who died in 2018.

Dillon spoke very briefly before turning the podium over to two of his grandsons. Andy Sajevic and Nolan Dillon spoke about their grandmother’s legacy to their family and the camp.

“Her faith was kind of the rock of who she was, and then follow right behind that was her love for her children and her grandchildren,” said Sajevic.

“She would have loved to see all these people here and all the smiles that we’re seeing right now,” said Nolan Dillon.

For many years, Hazel and Sid Dillon Sr. have been supporters of Carol Joy Holling Camp, which was founded in 1979 on part of the Holling family farm. Several of the Dillon family members attended the camp over the years.

In 1974 George and Irene Holling donated 318 acres, which is filled with tree-covered hills with a creek running through, to Nebraska Synod of the Lutheran Church in America. The land was to be used to create a children’s summer camp in honor of their daughter, Carol Joy Holling, who was killed in a car accident in Las Vegas, N.M. on her way to college in 1952. The Hollings stipulated that the camp must be operational within five years.

George Holling’s great-nephew, Mike Holling told those assembled for the dedication ceremony that his great-uncle was a hard worker and a task master, but he would be pleased with the new building and the entire camp.

“I don’t know that he ever could have imagined it would develop into the kind of facilities that we enjoy here today,” he said.

Jason Gerdes, executive director of Nebraska Lutheran Outdoor Ministries (NLOM), which oversees the camp, said the camp is a tribute to Carol Joy Holling and her family.

“And so that legacy that the Holling family has continued to leave us is something that we honor and we steward,” he said.

The new facility is located in the same spot where the youngest campers have always been housed, in the area of the camp called TrailHead. Children slept in large platform tents on this site. Holling House was built as a dining hall and storm shelter.

Both TrailHead and Holling House had served their purpose for many years, but needed to be replaced, Gerdes said. He and the other NLOM executives determined that it was time to build a new structure that encompassed housing and dining facilities. Sampson Construction, the company that has built all of the major projects at the camp, was hired.

The 12,000 square foot lodge will house and feed campers in the summer and will host events, meetings, conferences and retreats during the rest of the year.

“The kids are going to have the best first experience at Carol Joy Holling Camp that they’ve had in a very long time because of your generosity and your time and all the ways you participated,” Gerdes told the crowd.

The $3.2 million facility is the major piece of NLOM’s current campaign. The Trailhead Shaping the Faithful Leaders campaign also includes two endowment funds. An endowment of $1.5 million will subsidize camp for children whose family can’t afford the fee. Gerdes said nearly a third of the children who attend summer camp are subsidized.

“We want to make sure that no child is ever turned away because of what they can pay,” he said.

Another $500,000 has been added to the second endowment fund, which will pay for scholarships for counselors who want to attend seminary. Gerdes said 50 pastors have come from the camp’s counselor base in the 42 years Carol Joy Holling Camp has been in existence.

One of those “legacy” pastors, Pastor Steve Johnson, is now director of Campus Ministry at Midland University. He led the group in prayer during the dedication.

“Send your blessings upon us and upon Hazel Dillon Lodge, which we set apart today to your praise and honor,” Johnson said.

The ceremony ended with the Dillon family gathering to cut the ceremonial ribbon.

ASHLAND – It seems the viaduct project that has shutdown outbound traffic has made traveling through Ashland a challenge for taller vehicles, …

ASHLAND – An area that trained many a cowboy in its day could soon be training firefighters.

OMAHA – The bison herd at Lee G. Simmons Wildlife Safari Park in Ashland has grown by one — a calf born on May 11. Visitors can see the auburn…

WAHOO – Justin Johnson and Jason Dean have known each other for years. In the past, they used drugs together. These days, they hold each other…

WAHOO – After nearly a week on the run, a Memphis man is now in custody after threatening to kill his former girlfriend and her children with …

Bostelman resolution to be reviewed in summer

LINCOLN – On May 18, two legislative resolutions related to the ethanol plant in Mead were introduced during the waning time legislators had l…

ASHLAND – The plan was for students in pre-kindergarten to second grade to start the 2022-2023 school year in a brand new building.

SOARING: Teddy Risney looks like a super hero as he leaps through the air during the long jump event at the Unified Track and Field Meet on April 28 in Ashland. The Ashland-Greenwood student was one of more than 200 athletes from 11 schools that competed in the meet. (Staff Photo by Suzi Nelson)

PARADE: The Ashland-Greenwood Unified Team drives through Ashland as members of the downtown business community gather to cheer on the student athletes on the morning of April 28.