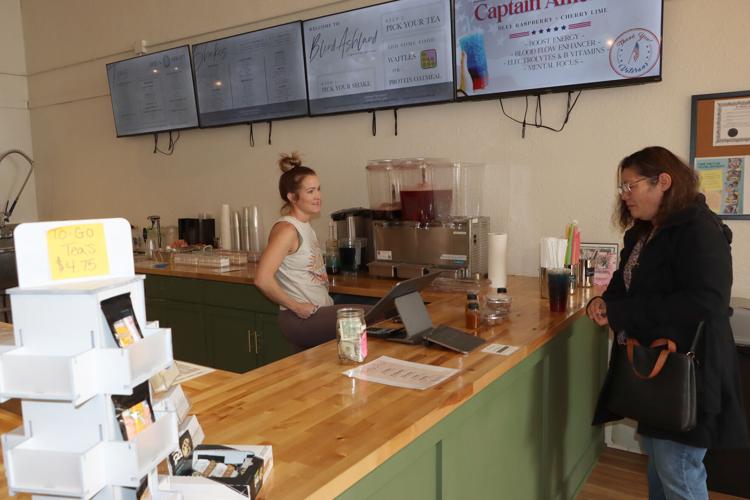 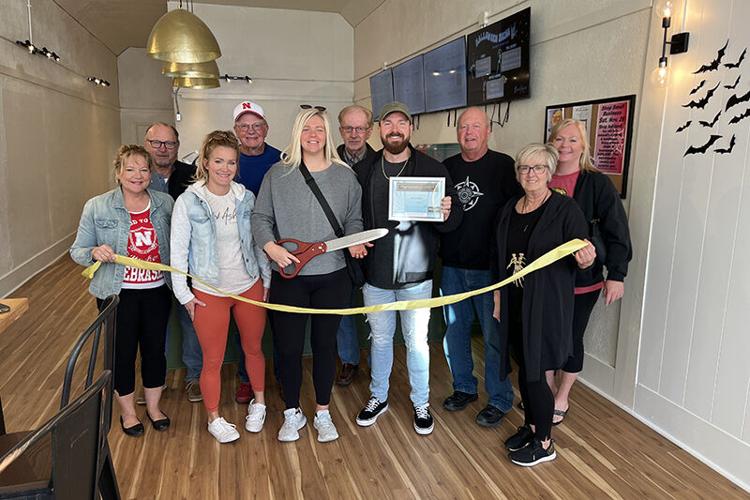 ASHLAND – Just before Ashland’s busiest weekend of the year, Blend Ashland opened its doors to the public.

And then the Saturday of Stir-Up weekend hit. Crowds thronged to downtown Ashland to watch the parades, to play games and go on rides. And to get something to eat or drink.

Blend Ashland’s narrow shop was full of people clamoring to get a taste of the healthy beverages and foods offered at the new downtown business.

That’s when Lexie and Reagan Nikkel knew things were off to a great start in Ashland.

Since then, they have brought on a full-time manager and expanded hours to keep up with the demand for energy teas, smoothies and protein balls.

A little over four years ago, Lexie was attending Southwest Oklahoma State University in Weatherford, Oklahoma on a soccer scholarship. The Council Bluffs native would stop at the health food store owned by Reagan after practice.

“I’d go in there with my teammates and we’d get shakes and teas,” Lexie said.

Reagan was also Lexie’s cross-fit coach at the local gym. The pair bonded over smoothies and sit-ups, and married in September 2020. Their first baby is due just before Christmas.

Lexie was majoring in business and entrepreneurship in college, so she easily adapted to the life of a small business owner. She was so excited to become an entrepreneur that she left college six credits short of a degree, somewhat to the dismay of her parents, she said.

But their sorrow soon turned to support, as they saw how successful Lexie and Reagan became. In four years, they opened five health food stores in the Omaha area. They also have four in Iowa and 26 in Oklahoma.

Lexie and Reagan only own two of the stores – the one in Ashland and one in southwest Omaha. The other locations are called “partner locations,” and are owned by friends or family members.

The owners can brand the health food store as they like. Many of the stores had the word “nutrition” in their names, like Nutrition 402 or On Point Nutrition, but Lexie said there was some confusion with a national chain, so they changed the names of some stores.

Lexie and Reagan’s Ashland and West Omaha stores used “Blend” in their names to reflect the shakes and smoothies that they serve.

But in Ashland, energy teas are the best sellers, accounting for 70% of the beverage sales, according to Lexie.

“People here love teas, for sure,” she said.

Customers at Blend Ashland who were used to relying on canned or bottled energy drinks or coffee to get them through the day are switching to energy teas or protein coffee. Their biggest customer base so far has been teachers.

“Teachers need a boost of energy before and during lunch,” Lexie said.

After school, kids and teens are standing in line to get their favorite energy tea or shake.

It’s not just beverages that are sold at Blend Ashland, however. The menu also includes waffles and acai bowls, and now that cold weather has arrived, this week they added hot drinks and protein oatmeal and mug cakes to the selections.

Although Blend Ashland has a variety of options on the menu, each one is customizable, and customers love to take the opportunity to create their favorite blend, said Kyann Sheets, Blend Ashland’s manager

“People like to customize their teas here,” she said.

Customer can also have their favorite tea or shake flavors made into a waffle or oatmeal, Lexie said.

Each location comes up with their own recipes for the beverages and food on their menu.

“That’s kind of the beauty of what we do,” Lexie said.

There are specials each week to match a theme or holiday. For example, last week a special red, white and blue tea was called “Captain America” in honor of Veterans Day.

Lexie said the customers in Ashland are excited to try new flavors and combinations.

“Everyone here is really open-minded,” she said.

Lexie and Reagan felt Ashland would be a great place for a health food store, given that there were not many similar eating options in the community. They had recently relocated to Nebraska when they made a visit to Ashland.

“I fell in love with this town when we moved to Elkhorn,” Lexie said.

In fact, she loved Ashland so much she wanted to move to the community, but they had just settled in their house in Elkhorn. And with a new baby on the way, the move was delayed. But plans are still in the works to make Ashland their home in the not-too-distant future.

Until then, Lexie will have to be content with her daily interactions as an Ashland business owner. She said the local business community has been very welcoming, something she was not expecting.

“This town is supportive of local businesses, which I love,” she said.

When they started their first location in Omaha, Lexie and Reagan felt less than welcome. Because of their ages (20 and 23) and their unique business concept, potential landlords laughed at them.

But they didn’t let that stop them, and in February 2019 they opened their first location.

The COVID-19 pandemic was an unexpected boon for the couple’s burgeoning health store empire, as people began to focus on their health while in lockdown.

Kyann was a customer of Blend Ashland before she became manager. A full-time member of the Army National Guard stationed at Camp Ashland, she was overjoyed that there was a place to get a healthy drink or meal while she was at work.

“I was coming here because I was super health conscious,” she said.

She was at Blend Ashland so often, Kyann joked that she should get a job there.

Then fate intervened, and the manager position opened at the same time Kyann was ready for a change of career.

Now she enjoys working with Lexie and Reagan and the five part-time employees at Blend Ashland.

“I love building relationships with people and getting to know the people of Ashland,” she added.

YUTAN – Although the two cleanup efforts are completely separate projects, some members of the public believe the Superfund site at the former…

PAPILLION – A La Vista attorney who served as an alternate public defender in Cass County has been charged with three felonies, including forg…

WAVERLY – Storage Ninjas, a family-owned and operated company in Nebraska, is proud to announce the acquisition Waverly Self Storage. The sale…

ASHLAND – Jim Anderson said it hasn’t quite soaked in yet that he is going to be the next mayor of Ashland.

ASHLAND – As the first Ashland City Council meeting following the sudden death of Mayor Rick Grauerholz concluded, the council spoke about the…

ASHLAND – Jerry Lofberg will join the Ashland City Council representing Ward 1 after winning the Nov. 8 General Election with 54% of the vote.