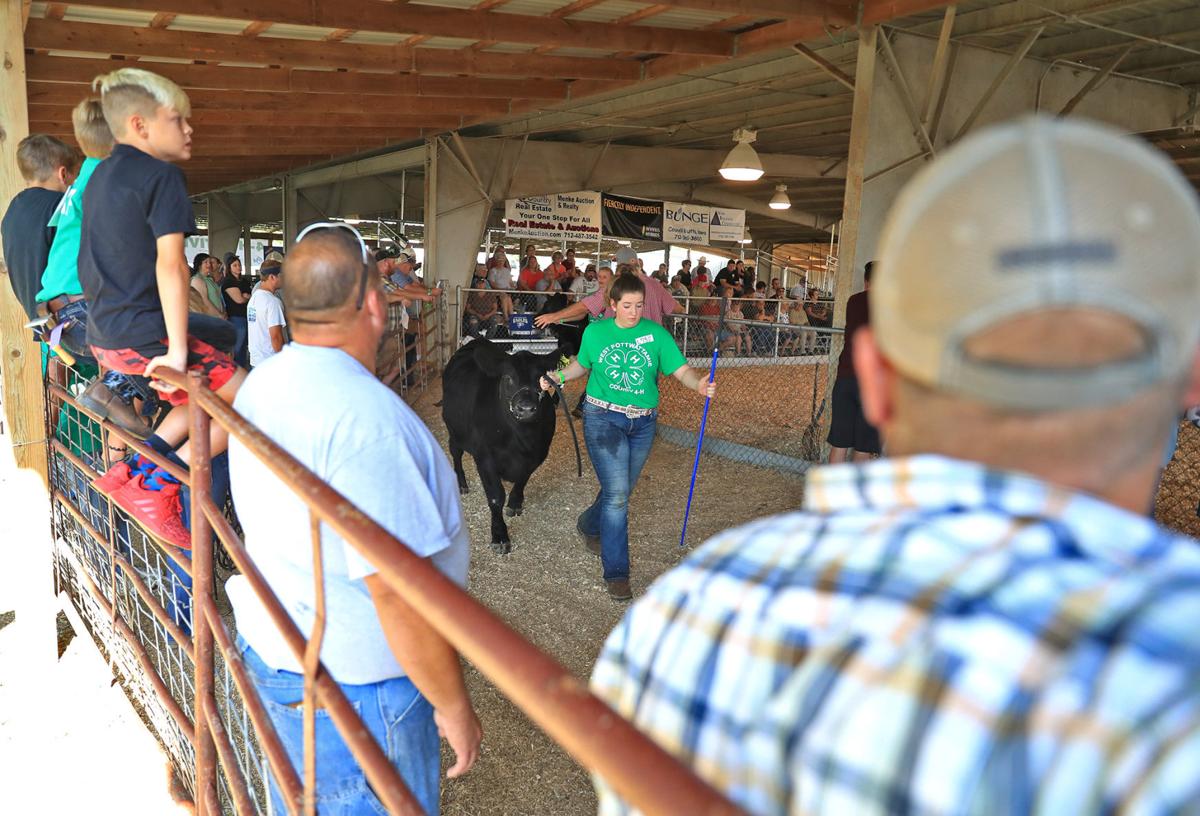 A Crescent Innovators 4-H Club competitor exits the arena after showing her market heifer during Westfair on July 27, 2019. 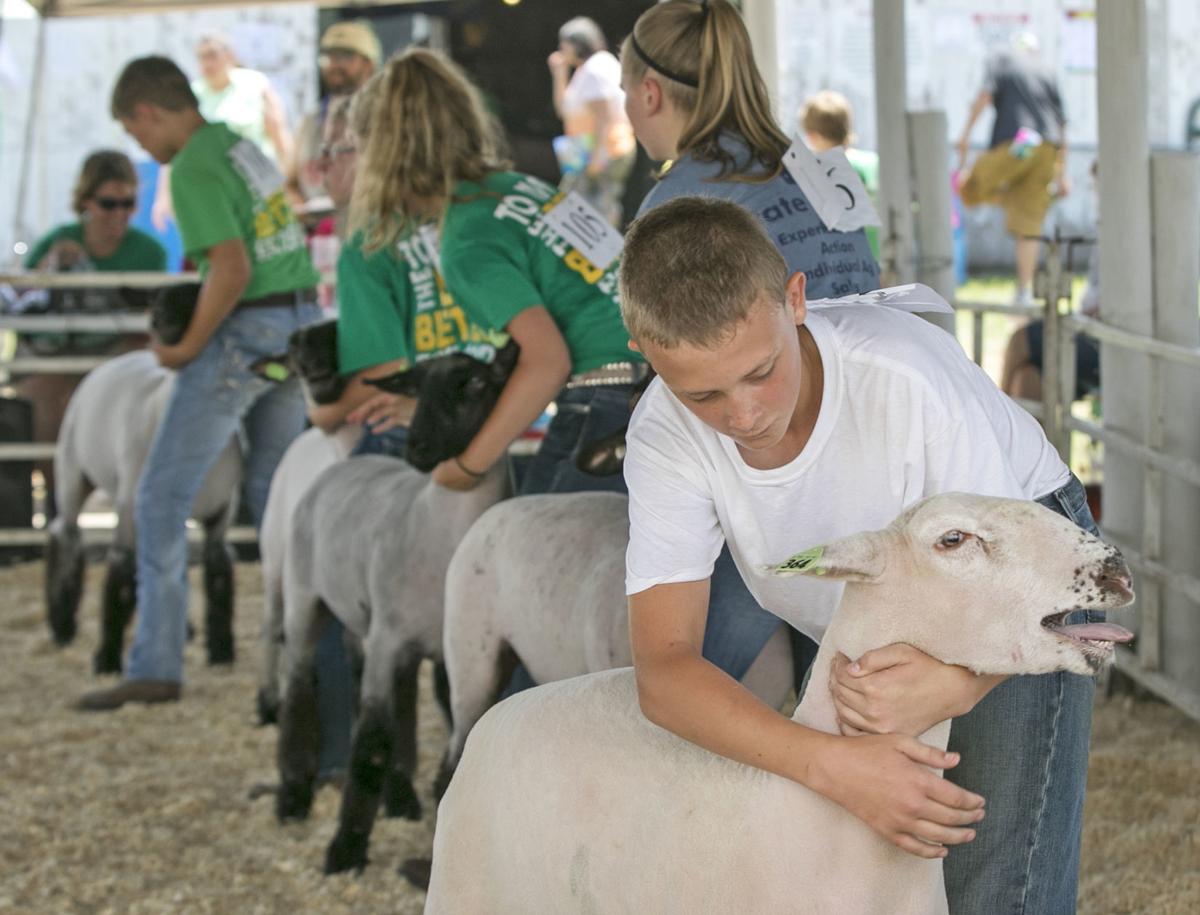 A member of the East Pott. Hot Shots 4-H Club, shows in the market lamb competition at the 2016 Pottawattamie County Fair.

A Crescent Innovators 4-H Club competitor exits the arena after showing her market heifer during Westfair on July 27, 2019.

A member of the East Pott. Hot Shots 4-H Club, shows in the market lamb competition at the 2016 Pottawattamie County Fair.

The Pottawattamie County Fair and Westfair will both go on this year, but in scaled-back, modified ways.

Because of the COVID-19 pandemic, both fairs will not include many of the elements that traditionally draw crowds out to the respective fairgrounds in Avoca and Council Bluffs every July.

4-H and FFA events are the only events planned, and will be livestreamed on the Pottawattamie County Fair Facebook page: facebook.com/EastPottawattamieCountyFair, Kadel said.

"We will be cleaning after every event. Livestock will come in, spend one night in the barn, we will have the show and within two hours of the show, all of that species of livestock will be off the ground," Kadel said. "We will then thoroughly clean the area including the barn and the scale to prepare for the next event."

Kadel said organizers are hoping to limit the number of people coming to the livestock shows for the safety of the participating youth. To that end, she said livestreaming the events on the fair's Facebook page will allow families to watch from home at a safe distance while allowing them to be part of the event.

"It's overwhelming for the kids to go through, but they understand this is being done for their safety," Kadel said. "They're excited to still have the opportunity to showcase their exhibits and animals. Our number one priority was making sure the kids could show their exhibits and livestock. It's just in a different format that is safer for all involved."

Westfair, which will be held July 18-26, will also see a number of changes this year in an effort to still have a fair amid the COVID-19 pandemic.

Rick Killion, treasurer for the Westfair Board of Directors, told the Nonpareil that canceled programs and events this year include:

Killion said the tractor pull will still be held on July 23, as will the motocross races on July 26. While there is no charge to go to the fair, there is a cost for arena events: $15 for adults (12 and older); $5 for children 6-11; and children 5 and younger are free.

The cancellations and changes come with a price tag. In 2019, the board generated $66,000 in total tickets sales — most from the demolition derby and Figure 8 race arena events, Killion said. He predicted the fair could lose as much as two-thirds — $44,000 — of that revenue.

"So yeah, it's going to hurt," he said. "... it's unfortunate. Like a lot of events in the community, the COVID-19 virus has affected our county fair as well. Hopefully, we'll be able to get through this and be back for a better, stronger fair next year."

Killion added that organizers are taking precautions and implementing some social distancing guidelines, including information signage, taping off areas in the arena bleachers to allow for space in between groups and barricades with social distancing markers for people as they line up at the arena's concession stand. The concession stand will have a reduced, simplified menu. He noted that the arena is an outdoor venue, and while there will be hand sanitizer and masks available, the fair board is not requiring people who come into the arena to wear a mask.

While the non-arena parts of the fair remain open to the public, Killion said organizers want to minimize the amount of people on the grounds at any given time. He added that with the carnival, food, queen competition and two arena events cancellations, there isn't much left for the public to see.

"We are going to monitor the numbers as much as possible," he said. "We've had discussions with (Pottawattamie County Planning Director) Matt Wyant about how to proceed safely. ... Not having the arena events, I would expect our total attendance for the whole week might be 5,000."

Carol Waters, county director at Iowa State University Extension's West Pottawattamie County office, said 4-H and FFA activities — including static and livestock exhibits — will also be modified as "show and go" where the students will bring in projects for judging and then will immediately take them home.

Most livestock will only be there the day of their showing, Waters said. Beef and hog exhibits will be kept at least one night for shows due to the amount of work that comes with those types of livestock exhibits.

"We don't have a limit on spectators, but we are highly encouraging spectators stay home," she said.

Static exhibits — exhibits such as photography, crafts, art, etc — will not be open to the public, Waters said. 4-H students will be drop off their entries and they will be judged without the competitor there. There will also be a food and nutrition competition, but judges can't taste the entries.

"Normally, the judges and 4-Hers sit down and visit about their projects," Waters said. "This year they can't do that, so we will rely on the projects and write-ups to speak for themselves."

The annual livestock auction will also be changed this year, Waters said. The livestock sale committee is asking previous buyers to donate to a premium fund and then the money will be allocated to participants by species and by ribbon.

Waters said she, like many others, hope these changes won't have to be implemented again next year.

"It's just like schools and anyone else returning with large groups of kids: We're hoping this is a one-year modification and that things will settle or normalize and we can get back to getting back to the fair we want," she said.

Changing this year's fair to accommodate safety in the pandemic has been a challenge, Kadel, Killion and Waters all said.

"It takes a lot more thought and preparation. Each show at the fair is a hundred decisions. For the last 100 years, we've made tweaks as we went along. This year, we've had to make all the decision over again," Waters said. "But the kids will still get a fair experience and get to exhibit their project work, which is what the goal is.

"Change is hard, and most have understood the need for it. There are families grieving that their kids can't have the normal fair experience this year, but most understand why we've had to make these changes."

Carriker Chronicles: What if all conferences can't play college football this fall?

Carriker Chronicles: What if all conferences can't play college football this fall?